Tag: Creepy Video Shows Large-Scale Mind Control Going On In The Democratic Party As ‘Big Tech’ Launches All Out War Upon Conservative News 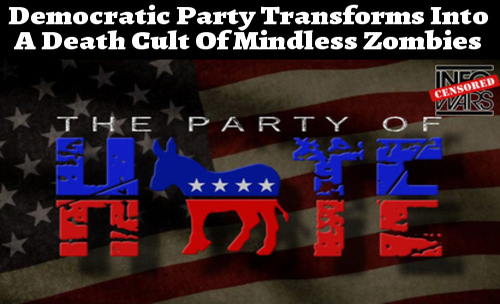 We’ll very rarely on ANP lead off our story with a video but this one is far too important to stuff down at the bottom of the story where some may miss it. We’ve combined two different videos into one that were posted by CRTV on twitter and facebook, with CRTV asking in their tweet “What…..is happening here?” The brief 44 second video below speaks much louder than words ever can.

And with this creepy video giving us a look into the mindset of Democrats in 2018, where many of them are already transitioning from being merely ‘a mob‘ into being ‘domestic terrorists‘ as we’ve seen in antifa terrorists vandalizing the GOP’s headquarters in New York, we see the results of outright MK Ultra mind control happening before our eyes in this video via neuro linguistic programming, one of the most common forms of mind control.