Tag: Chemo Brain: Ruth Bader Ginsburg had to be reminded by the audience what the 14th Amendment says

Chemo Brain: Ruth Bader Ginsburg had to be reminded by the audience what the 14th Amendment says 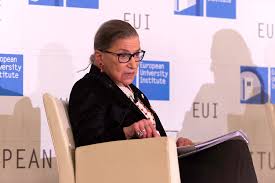 As the insane Left continues to vent its rage over Supreme Court nominee Brett Kavanaugh, claiming he’s somehow “unfit” for the high court because a few women have accused him – without proof and corroboration – of sexual assault, at least he’s got one thing a current SCOTUS justice doesn’t have.

Kavanaugh’s accusers and those who have chosen to believe them aside, he’s been praised even by some of his current detractors as having a brilliant legal mind. What’s more, he’s well-schooled in the original intent behind each amendment of the Constitution, and particularly the Bill of Rights. He will make a fine justice if he can get past the Leftist nonsense and be confirmed.