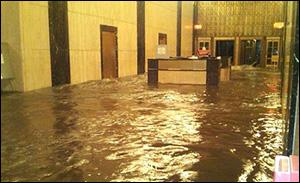 As thousands of residents of North and South Carolina remain in shelters in the aftermath of catastrophic flooding from Hurricane Florence, zoning and planning boards across America are signing off on the plans of developers to build new communities in areas with inadequate water drainage and runoff facilities. At the same time, large expanses of lush native vegetation with the ability to absorb heavy rains are being replaced with concrete sidewalks and driveways, exacerbating the flooding problem. Government safeguards against over-development are being rolled back or simply ignored in towns and cities across the country by officials too cozy with moneyed developers who finance the government officials’ political campaigns.