Media HYSTERIA reaches new high over EVERYTHING related to Trump

Stocks and Precious Metals Charts – I Shall Not Want

“Teach me your way, Lord,
that I may rely on your faithfulness;
give me an undivided heart,
that I may fear your name.
I will praise you, Lord my God, with all my heart;
I will glorify your name forever.
For great is your love towards me;
you have delivered me from the depths
and the realm of the dead.”

END_OF_DOCUMENT_TOKEN_TO_BE_REPLACED

The Mighty U.S. Shale Oil Industry To Lose Another $20 Billion In 2017

Unfortunately, the country’s shale oil industry will never allow the United States to become energy independent, but it will sure go BROKE trying to do so.

According to the article by Nick Cunnigham, Is Wall Street Funding A Shale Failure, he made the following remarks:

END_OF_DOCUMENT_TOKEN_TO_BE_REPLACED

The plot thickens, as the saying goes. As the “Trump-Russia collusion” story heats up, a new piece to the story emerges, with a little-known hacker who goes by the name “Johnnie Walker,” stealing the private emails of a top State Department expert on Russia.

A hacker claimed Tuesday to be in possession of emails taken from a top State Department official who focuses on “secret” intelligence work by the diplomatic agency toward Russia, and some of the emails included exchanges between the official and Central Intelligence Agency officers, Foreign Policy reported Friday.

END_OF_DOCUMENT_TOKEN_TO_BE_REPLACED

from Headlines With A Voice:

An online marketplace that sold illegal goods on the Dark Web has been shut down following a multinational law enforcement effort.

AlphaBay, a site which facilitated the sale of items such as drugs, stolen credit card numbers and weapons, unexpectedly went offline last week as raids were carried out in the US, Canada and Thailand.

END_OF_DOCUMENT_TOKEN_TO_BE_REPLACED

Exclusive Interview with Axel Merk on Diversifying with Gold & Cash 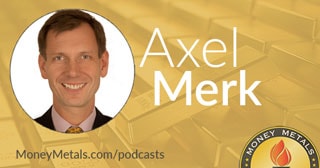 Coming up we’ll hear from Axel Merk, President and Chief Investment Officer of Merk Investments and manager of the Merk Funds. Axel breaks down investor complacency, the risk of putting too much money into risk assets and gives advice on the proper weighting of precious metals in your own portfolio. Don’t miss a sensational interview with Axel Merk, coming up after this week’s market update.

The extreme silver short position doesn’t necessarily mean a major bottom in silver prices is in. But it does indicate that a rally of at least some significance is likely to unfold soon.

“My Administration is focused on ending the horrific practice of human trafficking, and the three bills the House of Representatives passed today are important steps forward. Since taking office, I have met with courageous survivors, non-profit groups, and faith leaders who are devoting tremendous energy to raising awareness about human trafficking. I am hopeful that the Senate will take up and pass these three bills as soon as possible and I look forward to my continued work with the Congress on this important issue.” — Statement from President Donald J. Trump on the Passage of H.R. 2664, H.R. 2480, and H.R. 2200, July 12, 2017

END_OF_DOCUMENT_TOKEN_TO_BE_REPLACED

The Takedown Of The Elite Is About To Begin