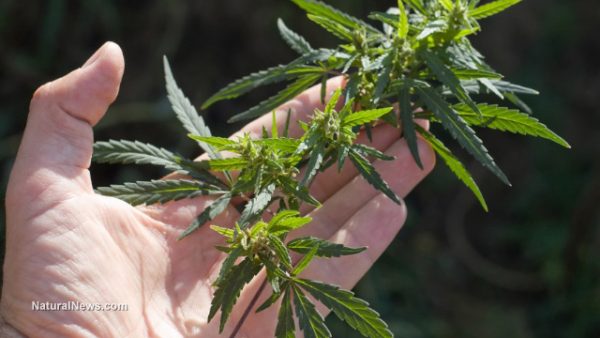 Chron’s disease is a long-term, chronic health condition that affects 700,000 people in the United States and is the result of inflammation in the gastrointestinal tract. Its symptoms can be mild or severe, and may include rectal bleeding, frequent and recurring diarrhea, significant weight loss, fever, abdominal pain and cramping, low energy and fatigue, and a reduced appetite. In severe cases, Chron’s can cause intense vomiting, a high fever and intestinal obstructions or abscesses.

END_OF_DOCUMENT_TOKEN_TO_BE_REPLACED

After Venezuela, Germany, Austria and the Netherlands prudently repatriated a substantial portion (if not all) of their physical gold held at the NY Fed or other western central banks in recent years, this morning Turkey also announced that it has decided to repatriate all its gold stored in the US Federal Reserve and deliver it to the Istanbul Stock Exchange, according to reports in Turkey’s Yeni Safak. It won’t be the first time Turkey has asked the NY Fed to ship the country’s gold back: in recent years, Turkey repatriated 220 tons of gold from abroad, of which 28.7 tons was brought back from the US last year.

According to the latest IMF data, Turkey’s gold reserves are estimated at 591 tons, worth just over $23 billion. This makes Ankara the 11th largest gold holder, behind the Netherlands and ahead of India.

END_OF_DOCUMENT_TOKEN_TO_BE_REPLACED

Market Report: Silver Is The Star

Having performed indifferently since the price fell in late January, the silver price suddenly broke out of its torpor with a 45-cent rise on Wednesday and peaked intraday yesterday at $17.36. Gold is still confined within its established trading range and is yet to break out.

END_OF_DOCUMENT_TOKEN_TO_BE_REPLACED

“The System Will Have To Collapse”

The public pension fund system is approaching apocalypse. Earlier this week teachers who are part of the Colorado public pension system (PERA) staged a walk-out protest over proposed changes to the plan, including raising the percentage contribution to the fund by current payees and raising the retirement age. PERA backed off but ignoring the obvious problem will not make it go away.

Every public pension fund in the country is catastrophically underfunded, especially if strict mark-to-market of the illiquid assets were applied. Illinois has been playing funding games for a few years to keep its pension fund solvent. In Kentucky, where the public pension fund is on the verge of collapse, teachers are demanding a State bailout.

END_OF_DOCUMENT_TOKEN_TO_BE_REPLACED

“Financial Stress” in the Credit Markets v. the 2-Year Yield 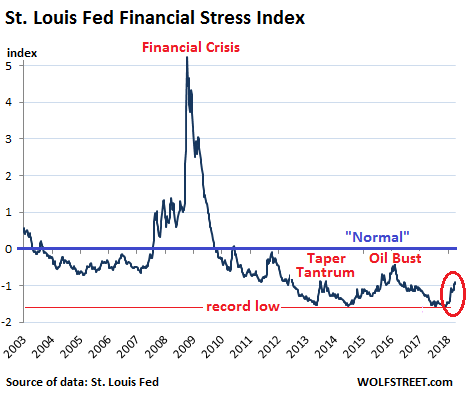 The two-year yield, now surging, is a leading indicator.

The Financial Stress Index, released weekly by the St. Louis Fed, is designed to track financial conditions that companies face in the markets. It reached record lows in November – meaning that there was extraordinarily little “financial stress” in the markets after years of ultra-easy monetary policies. The index then ticked up a little and did a mini-spike in February, but was still far below the historical “normal.” Then it zigzagged higher. Last week it had risen to the highest level since the Oil Bust two years ago, though it remained way below historical “normal.” In the current release, the index backed off again.

END_OF_DOCUMENT_TOKEN_TO_BE_REPLACED

Watch This & Know Something is Going On!

Russia entrusts its gold to no one, has zero bullion in US 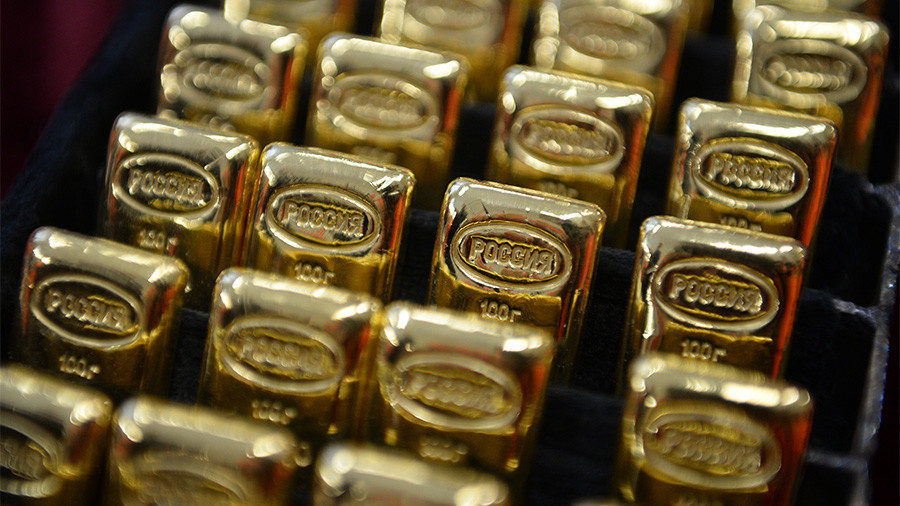 The Central Bank of Russia keeps all its bullion at home, since only in Russia can its gold be completely safe, according to Anatoly Aksakov, the chairman of the State Duma Committee on Financial Markets.

Answering a question about Turkey’s decision to repatriate its gold from the US Federal Reserve, Aksakov said: “We do not have a gold reserve in the US, we have only Forex (foreign exchange) reserves abroad. No one can lay hands on our gold.”

Russia’s reserves consist of foreign currency, Special Drawing Rights (SDR) holdings, reserve position in the IMF and physical gold. The amount of physical gold in Russian reserves has grown by 52.88 tons and reached 1,861.1 tons as of April 1.

END_OF_DOCUMENT_TOKEN_TO_BE_REPLACED 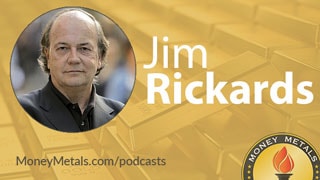 Coming up we’ll hear from Jim Rickards – monetary insider, economist and best-selling author. Jim examines what the next financial crisis will look like and how it will be different from previous panics and also gives us his outlook for gold and what he sees as being the key drivers that will propel the yellow metal higher. Don’t miss this fascinating conversation with Jim Rickards, coming up after this week’s market update.

Gold and silver markets moved closer to major breakout levels this week. On Wednesday, the silver market surged past the $17 level on strong volume. As of this Friday recording, silver prices trade at $17.23 an ounce, 3.3% higher on the week. Silver is finally showing signs of positive momentum, but prices still need to clear $17.70 to make a new high for the year.

END_OF_DOCUMENT_TOKEN_TO_BE_REPLACED

Why Giuliani May Spell the End of the Mueller Probe

The Economy Is Cooked

Of course, those paying attention to the data already knew this. Our politicians and central planers have been peddling to us the fantasy that the global economy is strengthening, finally ready to fire on all cylinders after nearly ten years of dependence on monetary stimulus.

That just ain’t so.

The Federal Reserve of Atlanta’s GDPNow measure, which gives a forecast of Q1 2018’s expected GDP, is currently coming in at 2.0%, down from the much more vigorous 5.4% growth predicted as recently as early February:

END_OF_DOCUMENT_TOKEN_TO_BE_REPLACED

Eric Holder, After Failing to Prosecute Wall Street, May Run for President

Make no mistake about it, the Big Law firms that played a major role in the Wall Street corruption that led to the financial crash of 2008 and have been burying corporate crimes through their crony ties to Washington for decades, are desperate to put their own man in the White House in 2020.

On Tuesday, former Attorney General, Eric Holder, who headed the U.S. Department of Justice in the Obama administration, appeared on the MSNBC program, “All In with Chris Hayes.” Holder told Hayes that he was considering a run for the President of the United States in 2020 but had not made a final decision. (See video below.) Obviously, if Holder ran, it would be as a Democrat, something that is certain to enrage the progressive wing of the party.

END_OF_DOCUMENT_TOKEN_TO_BE_REPLACED

ANOTHER RAID WITH SILVER HOLDING UP RATHER WELL

GOLD DOWN $10.20/SILVER DOWN 11 CENTS/TURKEY WILL REPATRIATE ITS GOLD FROM THE FRBNY; SHOULD BE FUN!/COMEY MEMOS RELEASED AND THE 3 COMMITTEE CHAIRS GO BALLISTIC AS IT WAS A NOTHING BURGER