SHOCKING DATA: IF YOU LISTEN TO ONE SILVER INTERVIEW IN 2020, IT SHOULD BE THIS ONE!

WE ARE AT WAR: America’s Bolshevik Revolution — Wayne Jett 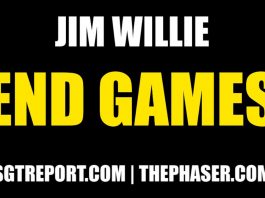 Q: THOSE WHO KNOW CANNOT SLEEP

412anon, Grand Torino and Dragon return to SGTreport to discuss the very latest news from the great awakening, Q and President Trump VS. the deep state and pedophile cover-upper mockingbird media. And Dragon makes a bold prediction.

Eric Gajewski, the founder of TradCatKnight joins me to discuss the Vatican NWO agenda, and Pope Francis’ pedophile coverup as he absolves more than 2,000 pedo Priests of their heinous crimes. We also cover prophecy, the plan for a one world religion, the role of Israel and the emergence of an anti-Christ figure in the near future.

Alt-media and Q analyst Lionel meets President Trump in the Oval office, the Mockingbird mainstream media continues to LIE about the fake dossier and cover up for crooked Hillary, and the Deep State, personified by former CIA Director and traitor John Brennan, roils. Thanks for joining us for this important REAL news update.

Bill Holter from JSmineset is back to discuss the blatant manipulation of the price of silver through billions of paper ounces sold into the market by criminal banks. We also discuss the deep state enemies of the people which are no longer hidden from view, and we are reminded of Q’s prediction that one day, these people will not be safe walking down the street. Thanks for tuning in.

THE HAMMER IS ABOUT TO DROP — Liz Crokin

Investigative journalist Liz Crokin joins me to discuss the latest breaking news including the accusation that Bill Clinton raped a young boy who is now 26-years old, and the investigator who broke the story is now dead. Liz firmly believes that all of the pieces of the puzzle are falling into place so that Hillary Clinton will be arrested before November 11th of this year.

Q: Something HISTORIC and GLOBAL is Happening

Something historic and GLOBAL is happening RIGHT NOW, and it’s called the great awakening. The mainstream “news” media has lost all credibility across all platforms and now even former hardcore liberals are beginning to wake up. And #Q, which the mainstream media calls “a bizarre pro-Trump conspiracy theory” is at the center of it all. Join me and my guests 412 Anon, Grand Torino and Dragon as we discuss all of the latest.

WE ARE THE LAST DEFENSE AGAINST GLOBAL GOVERNMENT – Brandon Smith

Is the debt and death paradigm in its own death throes as people wake up to the crimes of the NWO? Or does the international banking cabal still retain full spectrum dominance? Brandon Smith from Alt-Market.com says one thing is certain, WE the people are the last line of defense against a global government.

Posting this video to my backup channel since You Tube’s opaque ‘community guidelines are impossible to adhere to because they are selectively enforced. Adam Green from Know More News You Tube channel joins me to discuss #Q, President Trump and Zionism. Thanks for tuning in!

PEDOGATE: THEY ARE TERRIFIED BECAUSE IT’S ALL BEING REVEALED

The #Pedogate arrests are ramping up and reaching all the way to some elite names now. Today, Clare Bronfman the heir to the Seagram’s liquor fortune was arrested for what is likely to be revealed as her role in the NXIVM human trafficking operation. Meanwhile, a small time Hollywood actor is naming big names as specifically being pedophiles.

The Best Way To SILENCE DISSENT is to TERMINATE IT #YouTubeBigBrother

If you are watching this video, you have found my backup channel. My main You Tube channel was terminated today without cause or explanation. And along with it more than 1,000 videos and interviews were deleted from the pages of history, along with 345,000 subscribers and 8 years of work. This overt fascism against the people, against the Constitution and the Bill of Rights cannot stand. Please TWEET a message saying just that to @TeamYouTube. Harley Schlanger joined me this morning to discuss my channel’s termination pretty much as it happened.

Thanks for tuning in. Thanks for standing with me. And thanks for your continued prayers and support. God Bless.

The Deep State Criminals Just Went ALL IN — THIS IS WAR.

Watch this video which You Tube TERMINATED via Dtube:

Time to catch up on Q, the great awakening and the deep state WAR against our lawfully elected President with anons from Patriot’s Soapbox. John Brennan, James Clapper, Robert Mueller and James Comey are deep state agents rivaled only in their treachery by Hillary Clinton, Barack Obama, John Podesa and Debbie Wasserman Schultz. Brennan and the mockingbird mainstream media’s hysteria over Trump’s meeting with Putin illustrates that the deep state is now engaged in all out war against the President, the Constitution and the American people. Joins us as we discuss the latest.

Former CIA Director John Brennan helped wage economic war against Russia from 1998 to 2001 when the CIA and deep state laundered all of the gold with 9/11 as a cover, says author and former CIA officer Robert David Steele. Steels says, “For John Brennan to call President Trump a traitor or to say anything negative about Russia is absolute treason. The common enemy of Russia AND the United States of America is the deep state and the shadow government.”