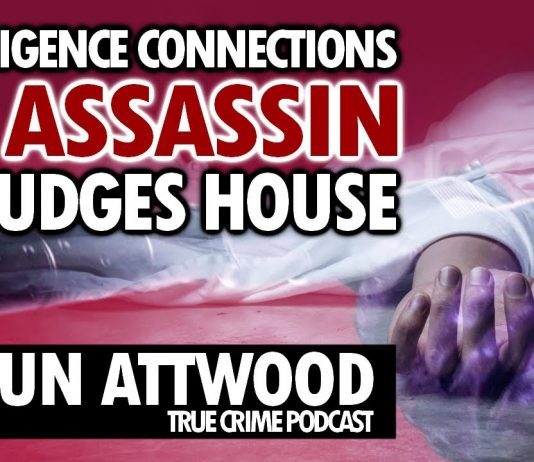 DB-Epstein lawyer shooting suspect worked for ‘CIA of Wall Street,’ did ‘men’s-rights activism,’ and had no clear personal motive

Earlier this week I blogged about two articles that seemed to imply a kind of “connection” for my normal daily dose of high octane speculation. And today is no different, as Mr. C.S., Mr. S.D. and Mr. S.D.D. (two different people) shared two different articles, and once again, my suspicion meter is in the red zone. First, Mr. S.D.D. shared this one about a strange new malady appearing in infants around the country:

US Doctors Baffled As Rare Spinal Disease Spreads Across 22 States

US doctors baffled as rare spinal disease spreads across 22 states

END_OF_DOCUMENT_TOKEN_TO_BE_REPLACED

Finally, nearly three weeks after what most of the world suspected to be a foul murder, the Saudi regime has officially admitted that Jamal Khashoggi was killed in its consulate in Istanbul, Turkey. No sooner had the Saudis issued their latest lie to cover up previous lies, US President Trump was lending White House prestige to the travesty.

Trump said the belated Saudi version of what happened was “credible”. He also welcomed as “good first steps” the Saudi arrest of 18 individuals and sacking of several top officials.

The Saudi “explanation” of Khashoggi’s death stretches credulity to snapping point. They are saying he was killed after a fist-fight broke out in the consulate. The Saudis are also claiming the de facto ruler of the kingdom, Crown Prince Mohammed bin Salman (MbS), did not know anything about the murder, its planning or aftermath. Recall that MbS asserted in an interview with Bloomberg on October 5 that Khashoggi had walked out of the consulate the same day he arrived.

END_OF_DOCUMENT_TOKEN_TO_BE_REPLACED

Crown Prince Mohammad bin Salman achieved a symbolic victory in his struggle to survive the diplomatic fallout from murder of Saudi citizen and dissident journalist Jamal Khashoggi: He met with members of Khashoggi’s family, including his young son, who is not allowed to leave Saudi Arabia, and even managed to take advantage of a photo-op with Khashoggi’s young son, who has been barred from leaving the country, per Reuters.

Meanwhile, the 18 men arrested by the Saudi government for their alleged involvement in Khashoggi’s killing, which the Saudi public prosecutor said over the weekend resulted from a “botched interrogation”. While 5 senior intelligence officials have also been dismissed, it appears that these 18 men will suffer the consequences for Khashoggi’s murder. Sources within the kingdom have confirmed that the 15 men identified by Turkish investigators were among the 18 who were arrested. US officials last month said they would revoke the visas of 21 men suspected of involvement in the killing.

END_OF_DOCUMENT_TOKEN_TO_BE_REPLACED

Saudi Crown Prince Spoke To Khashoggi By Phone Moments Before He Was Killed: Report

In the latest bombshell report involving the Khashoggi murder, Saudi Crown Prince Mohammed bin Salman reportedly spoke on the phone with journalist Jamal Khashoggi moments before he was murdered in the Saudi consulate in Istanbul. Turkish pro-government daily Yeni Safak disclosed the new alleged details of the case in a report on Sunday, contradicting claims by Saudi authorities that Prince Mohammed played no part in Khashoggi’s murder.

“Khashoggi was detained by the Saudi team inside the consulate building. Then Prince Mohammed contacted Khashoggi by phone and tried to convince him to return to Riyadh,” the report said.

END_OF_DOCUMENT_TOKEN_TO_BE_REPLACED

Hours after Turkish President Erdogan demanded that Saudi Arabia disclose the whereabouts of journalist Jamal Khashoggi’s remains, body parts reportedly belonging to Khashoggi have been found, according to Sky sources, though the exact location wasn’t revealed. According to anonymous sources cited by Sky News, the writer had been “cut up” and his face “disfigured.”

One source suggested that Khashoggi’s remains had been discovered in the garden of the Saudi consul general’s home. “Why has the body of someone who was officially said to be killed not been found yet?” Erdogan asked during his speech at Turkey’s parliament on Tuesday.

END_OF_DOCUMENT_TOKEN_TO_BE_REPLACED

The Saudis Keep Changing Their Story on the Murder of Khashoggi. What Should We Do?

The Saudi version of the disappearance and murder of journalist Jamal Khashoggi seems to change every day or so. The latest is the Saudi government claim that the opposition journalist was killed in a “botched interrogation” at the Saudi consulate in Istanbul. Or was it a fist-fight? What is laughable is that the Saudi king has placed Crown Prince Mohammad bin Salman, a prime suspect, in charge of the investigation of Khashoggi’s murder!

Though the official story keeps changing, what is unlikely to change is Washington’s continued relationship with Saudi Arabia. It is a partnership that is in no way beneficial to Americans or the US national interest.

END_OF_DOCUMENT_TOKEN_TO_BE_REPLACED

Finally, nearly three weeks after what most of the world suspected to be a foul murder, the Saudi regime has officially admitted that Jamal Khashoggi was killed in its consulate in Istanbul, Turkey. No sooner had the Saudis issued their latest lie to cover up previous lies, US President Trump was lending White House prestige to the travesty.

Trump said the belated Saudi version of what happened was “credible”. He also welcomed as “good first steps” the Saudi arrest of 18 individuals and sacking of several top officials.

END_OF_DOCUMENT_TOKEN_TO_BE_REPLACED

Oh yeah, we’re supposed to believe that there were rogue actors — in a Consulate?

We’re also suppose to believe those “rogue actors” were present and did their thing while in the presence of people known to be connected at a high level to MbS?  Because, you see, there were such people there.

I’m sure the nice private plane bringing some of them in — and then back out — was just a coincidence too. Tail numbers aren’t exactly secret, nor where they go.

Or the latest horsecrap run late yesterday — that he was “accidentally” killed in a “fight”?

END_OF_DOCUMENT_TOKEN_TO_BE_REPLACED

The Missing, Presumed Dead International Figure You Aren’t Hearing About

As the media focus on Jamal Khashoggi, Osama bin Laden’s old friend who writes for the Washington Post so that makes him a hero, another international figure has gone missing and may now be dead, according to his own wife.

Earlier this month the Daily Wire reported on the disappearance of then-Interpol President Meng Hongwei. He reportedly went to China to visit family, sent his wife a text with the “knife emoji” and a message saying “Wait for my call,” and then went silent. French police opened an investigation (Interpol headquarters is located in France) and asked the Chinese government for information. A day later, Interpol received a resignation letter from Meng, and China claimed he was being investigated for bribery.

END_OF_DOCUMENT_TOKEN_TO_BE_REPLACED

Why Did An American Hit Squad Kill Politicians In Yemen?

Skripal and Khashoggi: West Manufactures Absurd Fantasy to Pin on Russia, Lets Saudi Get Away With Chopping up WaPo Journalist Alive

by Finian Cunningham, via Russia Insider:

When former Russian spy Sergei Skripal went missing in England earlier this year, there was almost immediate punitive action by the British government and its NATO allies against Moscow. By contrast, Western governments are straining with restraint towards Saudi Arabia over the more shocking and provable case of murdered journalist Jamal Khashoggi.

END_OF_DOCUMENT_TOKEN_TO_BE_REPLACED

A 31-year-old lieutenant in the Saudi Royal Air Force said to have participated in the killing of Saudi writer Jamal Khashoggi died in a “suspicious car accident” in Riyadh, according to Turkish media.

Mashal Saad al-Bostani was reportedly on a 15-man hit squad dispatched to Saudi Arabia’s Istanbul Consulate in Turkey on October 2 during Khashoggi’s visit, before the team quickly left the country, according to daily Yeni Şafak.

Albostani entered Turkey at 1:45 a.m. local time (2245GMT). He stayed at the Wyndham Grand Hotel and left the country at 9:46 p.m. local time (1846GMT) on a private jet which belonged to the Sky Prime Aviation company. –Yeni Şafak