The use of short thread on LRAD/DEW Directed Energy Weapons against peaceful Australian protestors likely violates the Geneva Convention and could therefore constitute a war crime since it is prohibited to use weapons which cause excessive suffering against civilians.

A spokesman for ACT Policing has confirmed that LRADs were deployed during the anti-vaccine protests.

Last weekend in Canberra the Australian Federal Police Commissioner Reece Kershaw complained that the grassroots movement against forced jabs were a “challenge” for law enforcement. Videos from the march show huge crowds rising up against their government’s dictates which is why pro-mandate government officials retaliated.

END_OF_DOCUMENT_TOKEN_TO_BE_REPLACED

In case you’ve been under a rock, you’ve likely seen the conflict escalating between Russia, Ukraine, the United States and other NATO allies. This conflict is not new and has been increasing since the Obama administration breathed fire into a coup d’état and helped to overthrow then Ukrainian president Viktor Yanukovych.

When anger mounted against Yanukovych’s heavy handed behavior and corruption, the US went to Kiev to show solidarity with the Euromaidan activists. Leaked phone calls would later reveal that in 2013, Victoria Nuland, the assistant secretary of state for European and Eurasian Affairs, and U.S. ambassador to Ukraine Geoffey Pyatt discussed in detail their preferences for specific personnel in a post‐​Yanukovych government. The U.S‑favored candidates included Arseniy Yatsenyuk, the man who became prime minister once Yanukovych was ousted from power.

END_OF_DOCUMENT_TOKEN_TO_BE_REPLACED 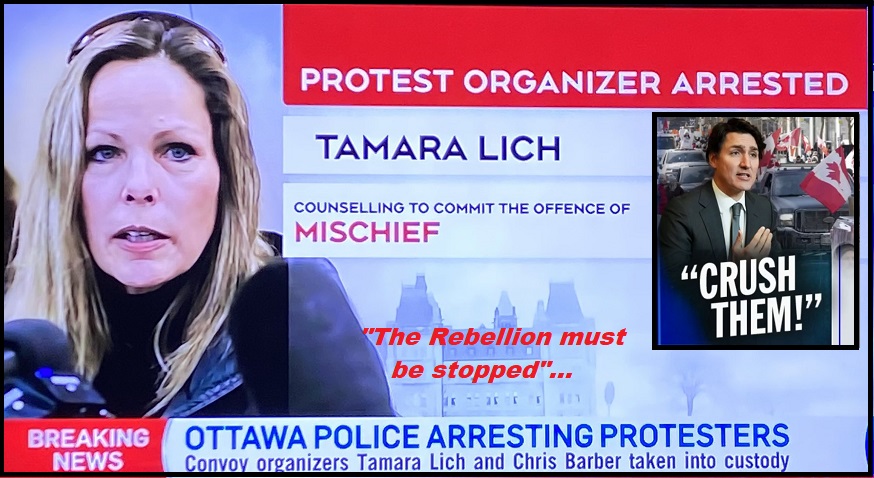 And so it begins… An Ottawa Judge has denied bail for convoy organizer Tamara Lich citing the severe threat she poses to the Canadian government and the destabilization of democracy in Canada.

From the 30,000-ft level, the timed delay of the judicial determination appears connected to last night’s parliamentary approval of the Emergency War Measures Act. The Crown stalled the judicial appearance until Parliament affirmed authorization of the EA.  The Act provides increased legal measures for the Crown to keep Lich in the bowels of the dungeon as punishment for her high crimes and heinous mischief.

END_OF_DOCUMENT_TOKEN_TO_BE_REPLACED

THIS CLOWN WILL BE TRIED FOR TREASON — CHRISTOPHER JAMES

Christopher James returns to SGT Report to explain how the service corporation masquerading as the Canadian ‘government’ will be brought to heel, and the face of the New World Order Justin Castro Trudeau will be tried for his treason. 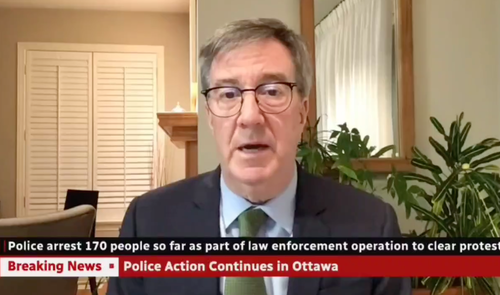 Ottawa police put an end to the “Freedom Convoy” protest in the downtown district that lasted for three weeks. On Friday and Saturday, officers arrested demonstrators and seized their vehicles. Now Ottawa Mayor Jim Watson wants to sell those seized trucks and campers to recoup millions of dollars the city lost during the three weeks of gridlock.

On Sunday, Watson told Canadian Broadcasting Corporation (CBC) that trucks, campers, and other vehicles seized from the convoy should be sold off, claiming Prime Minister Justin Trudeau’s emergency powers could give him authority to do so.

END_OF_DOCUMENT_TOKEN_TO_BE_REPLACED

PICS: ‘We Told You to Leave’ – Heavily Armed Police Descend on Canadian Truckers 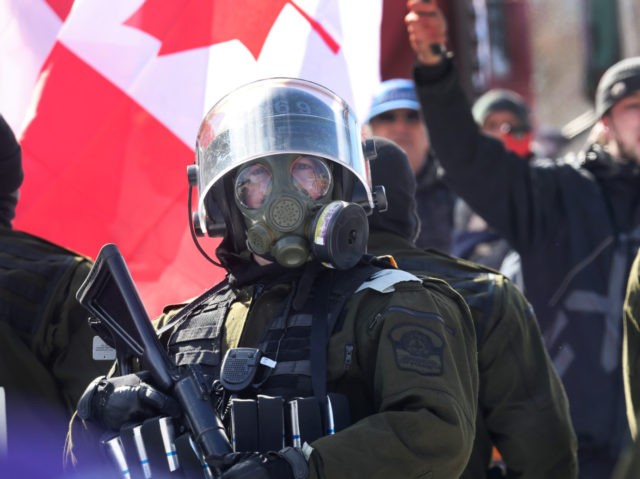 OTTAWA, Ontario (AP) – Police aggressively pushed back protesters, took control of some trucks and advanced toward Parliament on Saturday after arresting more than 100 people and towing away vehicles in Canada’s besieged capital. Scores of trucks left under the increasing pressure, raising authorities’ hopes for an end to the three-week protest against the country’s COVID-19 restrictions.

Police in tactical gear quickly gained ground Saturday on the second full day of one of the biggest police enforcement actions in Canada’s history, with officers drawn from around the country. Overnight, authorities towed trucks from areas where they had taken control in Ottawa’s downtown core.

END_OF_DOCUMENT_TOKEN_TO_BE_REPLACED

The End Is Near For Prime Minister Justin Trudeau 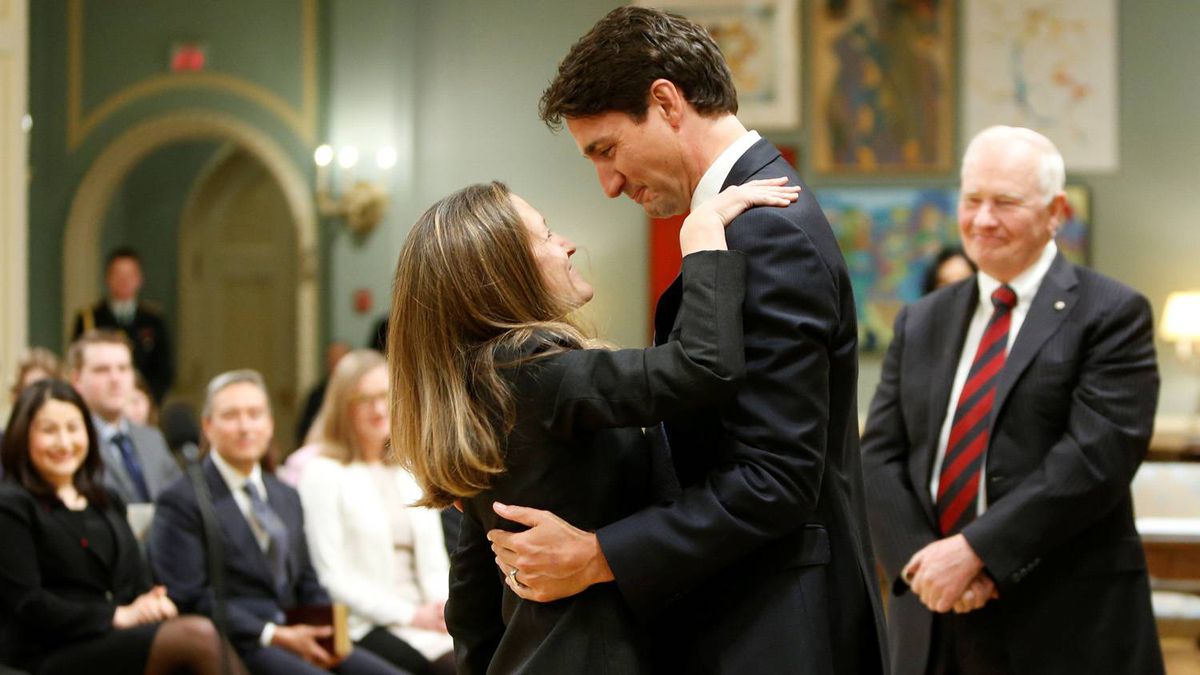 That Trudeau and Freeland must go—NOW!
Truly, it’s never been more urgent for the people of Canada to wake up to the following stark reality.

The multifarious machinations of the tyrannical Trudeau administration, in the aggregate, represent the stealthy New World Order blueprint for the entire world community of nations. In other words, as Canada is overtly taken over by the NWO perpetrators, so, too, will all countries be vulnerable to the same national sovereignty-destroying plots.

END_OF_DOCUMENT_TOKEN_TO_BE_REPLACED

Police in tactical gear quickly gained ground Saturday on the second full day of one of the biggest police enforcement actions in Canada’s history, with officers drawn from around the country. Overnight, authorities towed trucks from areas where they had taken control in Ottawa’s downtown core. Scores of trucks left under the increasing pressure, raising authorities’ hopes for an end to the three-week protest against the country’s COVID-19 restrictions. Authorities advanced to the front of Parliament Hill which has been occupied by trucks and protesters since late last month. Ottawa police addressed the protesters in a tweet: “We told you to leave. We gave you time to leave. We were slow and methodical, yet you were assaultive and aggressive with officers and the horses. Based on your behaviour, we are responding by including helmets and batons for our safety.”
END_OF_DOCUMENT_TOKEN_TO_BE_REPLACED 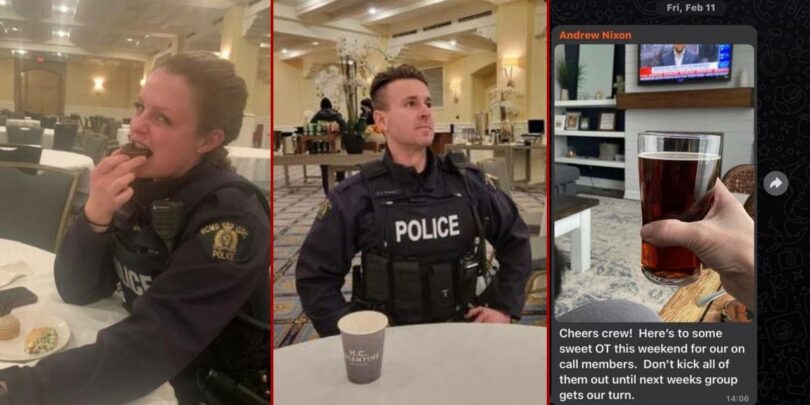 Leaked Ottawa Police and Royal Canadian Mounted Police messages show the depths of callousness and cruelty that have infected the Canadian police forces.

END_OF_DOCUMENT_TOKEN_TO_BE_REPLACED

Canada Police Prove they Are Like Nazis – Just Following Orders

The Canadian police have shown the entire world that they are no different from the Nazis of Germany whose excuse was the same – just following orders. It is a shame that they are defending Trudeau against all odds and world opinion. It was hard to win a race against Biden to the most unpopular world leader by Trudeau has achieved that amazing feat and he has singlehandedly destroyed the image of Canada on the worldwide stage of a free society which has taken a very dark road into authoritarianism.

END_OF_DOCUMENT_TOKEN_TO_BE_REPLACED 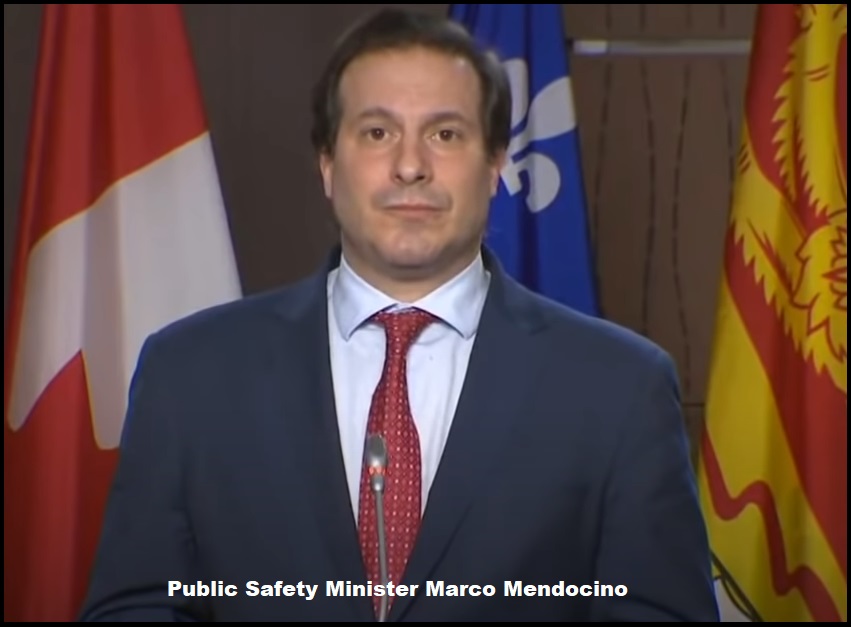 Worth watching this entire diatribe from start to finish.  In his public statements today, Trudeau’s Public Safety Minister, Marco Mendicino, definitively says the people charged by federal RCMP officials are tied to far-right extremist groups who are funded by international terrorist organizations with an intent to overthrow the government.

According to the statements, the Canadian government is under attack from thousands of highly organized terrorists within the country.  Their goal is to overthrow the government and install an entirely new form of national assembly.  This is what he is claiming.

END_OF_DOCUMENT_TOKEN_TO_BE_REPLACED Police are quickly escalating the situation in Ottawa as Trudeau’s crackdown on the trucker convoy continues.

What was once an overwhelmingly peaceful protest, chalked with street hockey and bouncy castles, has become a horror show of tyranny, with police mercilessly beating people and dragging them away for refusing to leave the area.

END_OF_DOCUMENT_TOKEN_TO_BE_REPLACED

As we’ve seen time and time again, history repeats itself. By understanding these patterns, you can predict the future and prepare accordingly. And based on what’s happening in Canada right now, we need to prepare for the American Freedom Convoy because fallout is almost guaranteed.

Here’s an example of what I mean by predictability. Back when the Covid outbreak was just beginning to gain a foothold, I wrote articles about the patterns demonstrated in other countries that were ahead of us in infections, particularly China and Italy. Now, obviously, we never have all the information so I was only able to use what was made public. Still, a very distinct pattern emerged and I predicted with reasonable accuracy when the lockdown of the US would begin and how long it was likely to last. Many people scoffed and that’s absolutely fine – it’s part of thinking critically. However, by identifying the patterns of what was happening elsewhere, it wasn’t difficult to guess how things would go down here.

END_OF_DOCUMENT_TOKEN_TO_BE_REPLACED 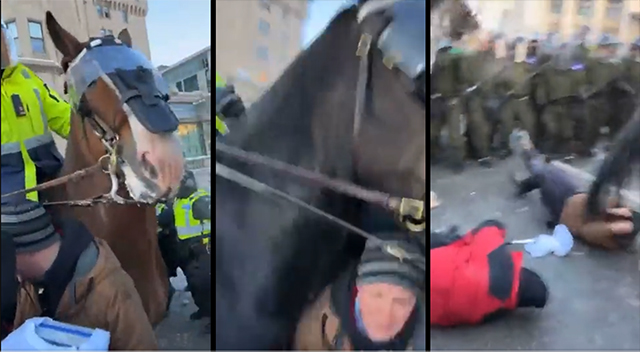 Disturbing video out of Ottawa on Friday shows police on horseback trampling a man and a woman with a walker.

Canada’s ‘Freedom convoy’ protests have continued to rage on amid extremist opposition by actors in the government. Moves by Justin Trudeau to criminalize the demonstrators overnight via emergency powers have remained highly controversial; so much so that even the allegedly left-leaning Canadian Civil Liberties Association publicly condemned the Canadian prime minister for the unprecedented move.