Risk has been Abolished, According to Institutional Investors

“Covenant-lite” loans – risky instruments issued by junk-rated borrowers, with few protections for creditors – set an all-time record at the end of the second quarter.

They’re part of the risky universe of “leveraged loans,” and they’re secured by some collateral, but they don’t come with the protections and restrictive maintenance requirements in their covenants that traditional leveraged loans offer creditors.

Even leveraged loans with more restrictive covenants are so risky that banks just arrange them and then try to off-load them to institutional investors, such as pension funds or loan funds. Or they slice and dice them and package them into Collateralized Loan Obligations (CLOs) and sell them to institutional investors. Leveraged loans trade like securities. But the SEC, which regulates securities, considers them loans and doesn’t regulate them. No one regulates them. 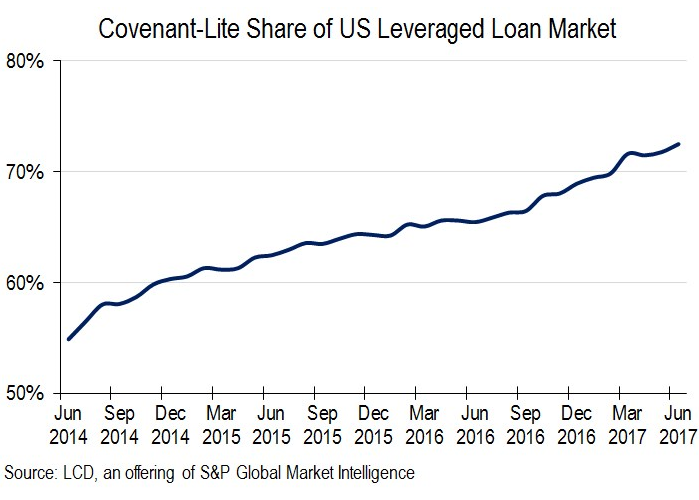 So what’s the big deal? When there is no default, there is no difference. And since there is apparently no longer any risk of default, it’s, well, no big deal. That’s what investors are thinking.

But when defaults do occur – as they have a nasty tendency to do – or before they even occur, investors have less recourse and fewer protections, and losses can be much higher.

The Fed and the OCC have been jawboning banks into backing off with leveraged loans for three years. Banks can get stuck with leveraged loans. They did during the Financial Crisis, which helped sink the banks. That’s when investors found out that leveraged loans are not exactly, as they say, as good as gold. But back then, the proportion of covenant lite loans was much smaller. So next time, the ride will be wilder.

Why do investors do this? They’re chasing yield, little else matters, and companies take advantage of that. LCD about the covenant lite loans:

For obvious reasons, they are more attractive to issuers, and have gained steady acceptance from loan arrangers [banks] and investors, particularly since 2012, when the US leveraged loan market found a higher gear after the financial crisis of 2007-08.

Then again, as naysayers are fond of pointing out, they’ve never comprised this much of the market before, so they will be under scrutiny once the current credit cycle turns.

Why Are The Elites Evacuating The United States And Europe?

BREAKING: Mr. President, Investigate this Immediately, It Blows Up the Entire Coup Against You!

We seldom interrupt our regular intelligence flow on this website. We are doing this now because the extraordinary memorandum produced by the Veteran Intelligence Professionals for Sanity (VIPS) yesterday conclusively demonstrates that the so-called Russian hacks of the Democratic National Committee were not hacks at all, but leaks by someone with physical access to DNC computers. The data was then doctored to incriminate Russia. You can read the entire explosive VIPS Memorandum here.

The VIPS, who include former NSA Technical Director William Binney, back the independent forensic analysis performed by a group including Skip Folden, retired IBM Program Manager for Information Technology U.S. No such forensic analysis was performed in any of the Obama intelligence community’s so-called “assessments.” The VIPS state that there were two inside leaks from the DNC. The first was in June of 2016, sometime before Julian Assange’s June 12th announcement that he had DNC documents and planned to publish them. The second leak was on July 5, 2016 to pre-emptively taint anything Wikileaks might publish by “showing it came from a Russian hack.” As is well-known, Wikileaks did publish its DNC trove showing that Hillary Clinton and the DNC conspired to rig the Democratic Presidential primary process against Bernie Sanders.

END_OF_DOCUMENT_TOKEN_TO_BE_REPLACED

‘Russian Hacking’ Exposed as Inside Job 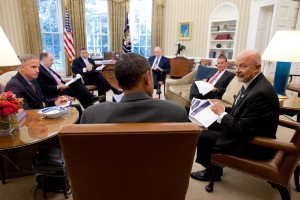 In a memo to President Trump, a group of former U.S. intelligence officers, including NSA specialists, cite new forensic studies to challenge the claim of the key Jan. 6 “assessment” that Russia “hacked” Democratic emails last year.

MEMORANDUM FOR: The President

SUBJECT: Was the “Russian Hack” an Inside Job?

Forensic studies of “Russian hacking” into Democratic National Committee computers last year reveal that on July 5, 2016, data was leaked (not hacked) by a person with physical access to DNC computers, and then doctored to incriminate Russia.

END_OF_DOCUMENT_TOKEN_TO_BE_REPLACED

MARK OF THE BEAST: DELTA AIRLINES ROLLING OUT FINGERPRINT SCANNING IN LIEU OF BOARDING PASSES.

A Wisconsin company is about to become the first in the U.S. to offer microchip implants to its employees.

“It’s the next thing that’s inevitably going to happen, and we want to be a part of it,” Three Square Market Chief Executive Officer Todd Westby said.

The company designs software for break room markets that are commonly found in office complexes.

Just as people are able to purchase items at the market using phones, Westby wants to do the same thing using a microchip implanted inside a person’s hand.

END_OF_DOCUMENT_TOKEN_TO_BE_REPLACED

Jim’s been sick for weeks, but starting to feel better.

Why is the MSM constantly talking about exchange rates?

A lot of movement different currencies, and the dollar collapse.

The Euro is on the rise, all seems well in central Europe, but Jim says it’s not.

The dollar is in deep trouble due to the petrodollar system collapse.

Banks Are Scheming to Dominate a Future Cashless Society

by Shaun Bradley, The Anti Media:

Visa recently announced its new Cashless Challenge program, which offers $10,000 to restaurants willing to transition into accepting only digital payments. As the largest credit card processor in the U.S., it’s no surprise Visa is spearheading this campaign. Under the guise of increasing transparency and efficiency, they’ve partnered with governments around the world to help convert financial systems into cashless models, but their real incentive is the billions of dollars in extra transaction fees it would generate.

“We are declaring war on cash,” Visa spokesman Andy Gerlt proudly proclaimed after the program was announced.

END_OF_DOCUMENT_TOKEN_TO_BE_REPLACED

It was the Clintons Who Colluded with Russia!

Even though media outlets have admitted the entire Russian collusion by the Trump administration is fake news, the Democrats continue to push the narrative that it is true and there is evidence to support it. What they will not do is acknowledge that their presidential candidate Hillary Clinton, and her husband Bill, actually colluded with Russia.

In a short 2:19 video, the evidence speaks for itself the the Clintons were the ones colluding with Russia for the sake of profit.

END_OF_DOCUMENT_TOKEN_TO_BE_REPLACED

Chilling! Congressman Warns Of Plan To Take Out Trump ‘Suddenly’

END_OF_DOCUMENT_TOKEN_TO_BE_REPLACED

James Alefantis, the owner of Comet Pizza, Comet Ping Pong, Transformer Museum and Pegasus Museum became a man of high interest to the truther community after the leak of the Podesta emails. His suspicious behavior, disturbing taste in art,reputation as being one of the most powerful men in Washington DC, and his controversial instagram posts to add fuel to the PizzaGate theory fire. Is there a sinister side to Alefantis, is he linked to child trafficking and money laundering… or is he innocent?