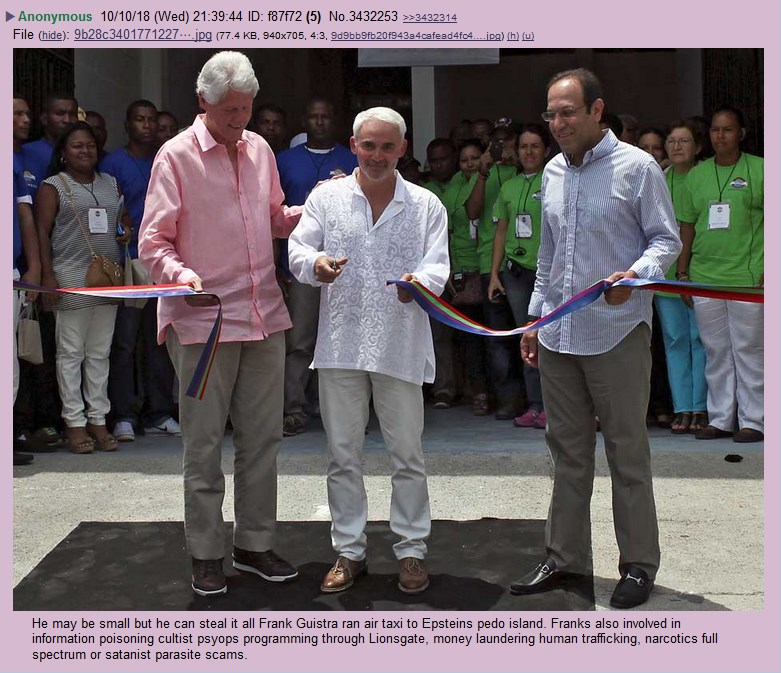 First up, if you missed my #BlackListAnon article, be sure to catch up with that first, because we’re gonna be exposing another Hollywood Fraud today: I was very pleased with the response this article got, because initially, I wasn’t sure if anyone would really care about the things I was seeing. After all, Franklin Leonard …

END_OF_DOCUMENT_TOKEN_TO_BE_REPLACED

This week, John Vibes and Matt Savoy are joined by Derrick Broze. Derrick is an author and journalist who just finished a US tour where he gave a presentation on “the pyramid of power” and hosted group discussions about solutions to the problems we face. In today’s conversation, we dive deep with Derrick into his new documentary on Jeffrey Epstein, and learn some new details about a child snatching cult with connections to the CIA. We also talk about the state of the anti war movement, and break down the top mainstream story of the past week with our own analysis of what they missed.

END_OF_DOCUMENT_TOKEN_TO_BE_REPLACED

Questions About the Mail Bomber

The Crown Prince of Saudi Arabia during the Obama administration provided intelligence that Osama bin Laden and his son were running the al-Qaeda terror cartel out of Iran, White House correspondences with former CIA Director John Brennan show, according to explosive revelations in a new book from intelligence insiders and highly secret government documents.

Brennan, who was working under Obama at the time in the White House, did nothing to pursue the information and try to shut bin Laden down or pursue the wanted terror leader after 9/11, high ranking officials confirmed as detailed in the upcoming book PAINE: How We Dismantled the FBI In Our Pajamas.

White House communication between Brennan and royal Saudis also confirmed the two countries — Saudi Arabia and Iran — had struck an official security pact where the two governments would cooperate with each other and had promised a cease-fire on terror attacks in Saudi Arabia. Months later, with the help of the Saudis in 2001 after the 9/11 attacks, intelligence officials said the Saudis helped broker a deal for bin Laden’s safe keeping in Iran. This included top al-Qaeda leaders as well.

END_OF_DOCUMENT_TOKEN_TO_BE_REPLACED

The Democrats Are Now Resorting to Absolute Fear Tactics

Does the aroma of desperation and gunpowder really mix?

I don’t believe this “bomb in the mail” nonsense for a minute, not a second, not a nanosecond. Using the media, again, as a weapon against the people.

Paint the Republicans as terrorist just prior to the midterms – great strategy if anyone believes these lies. No one cared that a “bomb was found” in Soros mailbox – now the story must be kicked up a notch. It’s in the mail to the clinton crime family!!!!

END_OF_DOCUMENT_TOKEN_TO_BE_REPLACED

This is completely ridiculous.

A suspected explosive device mailed to CNN’s New York City headquarters and addressed to former CIA Director John Brennan reportedly contained an image parody of the ISIS flag, along with a popular catchphrase made famous by comedian Larry the Cable Guy.

It’s now been admitted (roughly 12 hours ago) that the device was not mailed.  It has been reported that this one was hand-delivered by a courier, which explains how it managed to get to CNN without the stamps being canceled.

But that fact presents a second problem because couriers don’t operate without knowing who they’re delivering for and commercial buildings are bristling with security cameras.  In addition exactly what jackwad in said building allowed an apparent mail piece to be put into the building’s mail stream by a courier with stamps on it?

But, of course, Fox Snooz is still saying mailed.

END_OF_DOCUMENT_TOKEN_TO_BE_REPLACED A privacy expert tasked with protecting personal data within a Google-backed smart city project has resigned as her pro-privacy guidelines would largely be ignored by participants.

“I imagined us creating a Smart City of Privacy, as opposed to a Smart City of Surveillance,” Ann Cavoukian, the former privacy commissioner of Ontario, wrote in a resignation letter to Google sister company Sidewalk Labs.

“I felt I had no choice because I had been told by Sidewalk Labs that all of the data collected will be de-identified at source,” she added.

END_OF_DOCUMENT_TOKEN_TO_BE_REPLACED

We need to value honesty above optimism. Once we can speak honestly, there is a foundation for optimism.

Beneath the rah-rah statistics of “the greatest economy ever,” the social depression is accelerating. The mainstream is reluctantly waking up to the future of the American Dream: downward mobility for all but the top 10% of households. A 2015 Atlantic article fleshed out the zeitgeist with survey data that suggests the Great Middle Class/Nouveau Proletariat is also waking up to a future of downward mobility: The Downsizing of the American Dream: People used to believe they would someday move on up in the world. Now they’re more concerned with just holding on to what they have.

END_OF_DOCUMENT_TOKEN_TO_BE_REPLACED Only 13 days to the mid-term elections. The Brett Kavanaugh hearings were a disaster for the Soros led left wing lunatics. The blue wave was turning into the blue puddle. Trump’s poll ratings were the highest of his presidency. The dimocrats had been a shoe in to take back the House by flipping 30 or 40 seats. But, you could sense by the tone of the left wing propaganda media, things had changed. Trump’s legions were motivated. Moderates were leaning right due to the hysterics of the left wingers in trying to stop Kavanaugh. Even blacks are moving toward Trump.

END_OF_DOCUMENT_TOKEN_TO_BE_REPLACED

US Fueling Terrorism in China The West’s human rights racket has once again mobilized – this time supposedly in support of China’s Uyghur minority centered primarily in the nation’s northwestern region of Xinjiang, China.

Headlines and reports have been published claiming that up to a million mostly Uyghurs have been detained in what the West is claiming are “internment camps.” As others have pointed out, it is impossible to independently verify these claims as no evidence is provided and organizations like Human Rights Watch, Amnesty International, and Uyghur-specific organizations like the World Uyghur Congress lack all credibility and have been repeatedly exposed leveraging rights advocacy to advance the agenda of Western special interests.

END_OF_DOCUMENT_TOKEN_TO_BE_REPLACED

Hillary would argue that she was correct to delete these emails because they were personal business. This story makes us wonder what other items of interest might be found in the emails that her minions were instructed to destroy. These emails are being released in tranches, the last one occurring on October 4th. We’ll stay tuned.

Hillary Clinton is good to her friends. But what’s $47 million to her when it doesn’t come out of her own pocket?

END_OF_DOCUMENT_TOKEN_TO_BE_REPLACED

“I’m going to go ahead and state that there is a 0% chance that these “suspicious packages” were sent out by conservatives,” she tweeted.

“The only thing “suspicious” about these packages, is their timing. Caravans, fake bomb threats—these leftists are going ALL OUT for midterms,” Owens added.

END_OF_DOCUMENT_TOKEN_TO_BE_REPLACED

As the U.S. threatens to withdraw from the INF Treaty that was signed decades ago, the New Cold War has taken a darker and more dangerous turn.

As the U.S. threatens to withdraw from the INF Treaty that was signed decades ago, the New Cold War has taken a darker and more dangerous turn.

If you’ve been listening to these podcasts over the years, then you know that a history lesson is one of their foremost benefits…Professor Cohen specializes in Russian History, after all. And with news this week that the U.S. is considering a withdrawal from the INF Treaty signed by Reagan and Gorbachev in the 1980s, John and Steve are here to give you a full historical background and perspective on this dangerous new development.

END_OF_DOCUMENT_TOKEN_TO_BE_REPLACED

I, For One, Welcome Our New Robot Overlords… #PropagandaWatch