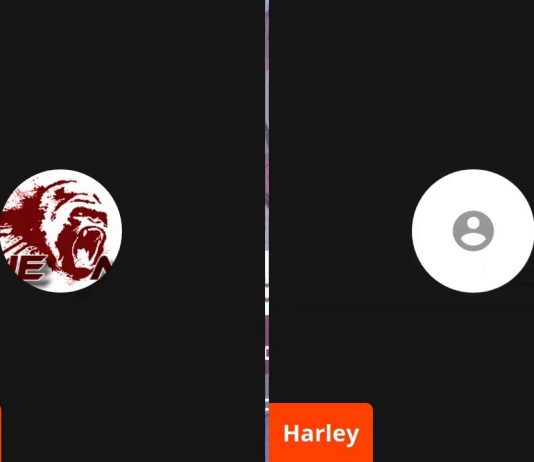 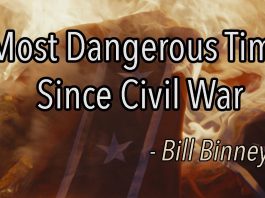 The Heart of the Matter in the South China Sea 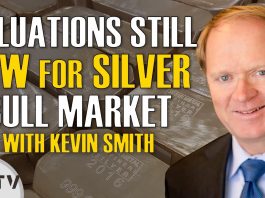 Iranian Foreign Minister Mohammed Javad Zarif said on Sunday that a new Iran Action Group in the US State Department aimed to overthrow the Islamic Republic would fail.

He was speaking on the 65th anniversary of a US-backed coup that overthrew a democratically elected Iranian prime minister, an occasion when anti-American sentiment runs particularly high in the Islamic Republic.

END_OF_DOCUMENT_TOKEN_TO_BE_REPLACED

Venezuela’s Great Bolivar Scam, Nothing but a Face Lift 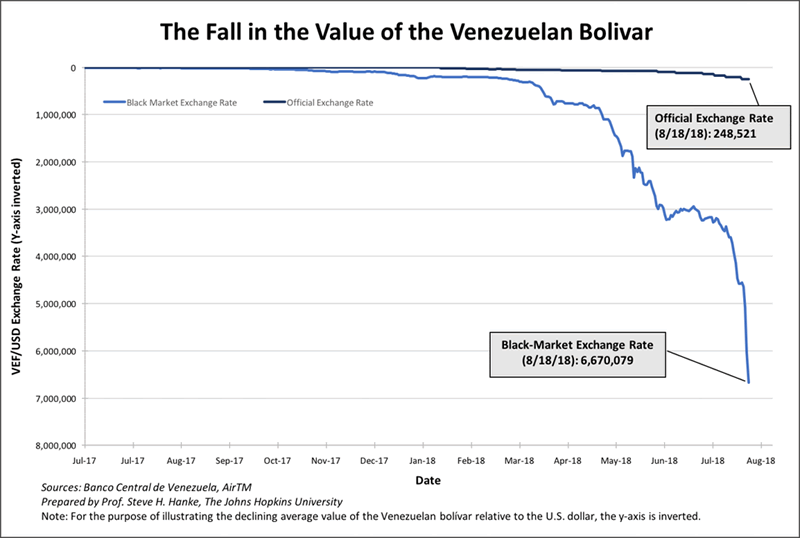 In the days leading up to Venezuela’s currency reform, which is set for August 20th, the bolivar has taken yet another deep dive. The chart below shows the bolivar’s free fall and the massive gap between the official exchange rate of 248,521 VEF/USD and the black-market (read: free-market) exchange rate of 6,670,079 VEF/USD. That gap results in a whopping black market premium of 2,584%. It also produces huge profits for Maduro’s cronies who have access to the official rate. They can purchase greenbacks for peanuts and sell them on the black market for an instantaneous profit of 2,584%.

END_OF_DOCUMENT_TOKEN_TO_BE_REPLACED

“FORGET YOUR SON”: BRAZIL IS FORCIBLY TAKING INDIGENOUS CHILDREN AND PUTTING THEM UP FOR ADOPTION

by Tatiane Klein, The Intercept:

I PRACTICED MY greetings in Guarani several times before approaching Élida Oliveira. Élida, who doesn’t speak Portuguese, had arrived that morning in the town of Amambai, in the state of Mato Grosso do Sul, deep in Brazil’s agricultural heartland and less than an hour’s drive from Paraguay. She was accompanied by officials from Funai, the federal agency responsible for indigenous affairs in Brazil. Élida had traveled there to explain how, three years earlier, local health agents and representatives of the municipal Guardianship Council in the city of Dourados, where she lives, had arrived to remove her newborn child from her custody.

END_OF_DOCUMENT_TOKEN_TO_BE_REPLACED

Australia Home Prices Falling as Sydney Drops 7%! Australians In Most Debt EVER IN HISTORY!

More proof has emerged confirming that China has erected expansive ‘re-education centers’ for up to a million or more ethnic Uighurs in what a recent United Nations statement said resembles a “massive internment camp that is shrouded in secrecy”.

The minority Turkic speaking ethno-religious group concentrated in the western Chinese province of Xinjiang has found itself under increased persecution and oversight by Chinese authorities of late as their mostly Sunni Islamic identity and separatist politics have resulted in historic tensions with the Communist government.

A U.N. panel examining human rights inside China wrapped up last week and included a Chinese delegation of about 50 officials which formally denied that prisons have been set up for the Uighur population.

END_OF_DOCUMENT_TOKEN_TO_BE_REPLACED

Ron Paul Liberty Report host Ron Paul is joined by his son, Sen. Ron Paul (R-KY), to discuss the Senator’s recent trip to Russia. What was discussed? Where is this new dialogue going? Will Sen. Paul’s efforts pay off and result in better relations? Or will the neocons, Democrats, and deep state continue to collude to invent a new Cold War? Join today’s Liberty Report:

END_OF_DOCUMENT_TOKEN_TO_BE_REPLACED

Adding fuel to the fire was last week’s warning by African National Congress chairman Gwede Mantashe that “you shouldn’t own more than 25,000 acres of land and if you own more, it should be taken without compensation.”

A record number of white South African farmers have already put their land on sale as the country’s ruling African National Congress (ANC) party considers altering the country’s constitution to allow land to be expropriated without compensation, according to The Sunday Express.

END_OF_DOCUMENT_TOKEN_TO_BE_REPLACED

How I Found My Brainwashed Daughter in the Sex Cult NXIVM

from The Daily Beast:

In this excerpt from ‘Captive,’ Catherine Oxenberg tells how she found out her daughter India was in the clutches of the predatory cult NXIVM
CATHERINE OXENBERG
08.17.18 10:09 PM ET
Bonnie and I reunited at a dimly lit bar in Beverly Hills. It had been four years since I’d seen her, and she looked exactly the same—except for the haunted look in her eyes.

We hugged, but she was so jittery, she could barely stand still for it. Before we sat down, she scanned the room to see if she’d been followed or if anyone was watching her.

END_OF_DOCUMENT_TOKEN_TO_BE_REPLACED

In the second half, Max interviews Max Blumenthal, senior editor of the GrayzoneProject.com, about the role of a NATO and Gulf monarchy funded ‘think tank’ acting as censor for Facebook.

Chaos and confusion erupted across Venezuela, and most stores were shuttered on Saturday, after president Nicolas Maduro announced that the government would enact a massive currency devaluation, implement a new minimum wage, hike taxes, and also raise gasoline prices for most citizens even as the country struggles with the greatest hyperinflation on record, surpassing even that of the Weimar Republic.

As a result of the enacted actions, the new version of the bolivar will be pegged to the value of the state cryptocurrency, the etro, which according to Bloomberg amounts to a 95% devaluation of the official rate, and will trade in line with where the black market was; the government will also raise the minimum wage more than 3,000 percent,  which works out to about $30 a month.

END_OF_DOCUMENT_TOKEN_TO_BE_REPLACED

The CIA Owns the US and European Media

William Blum shares with us his correspondence with Washington Post presstitute Michael Birnbaum. As you can tell from Birnbaum’s replies, he comes across as either very stupid or as a CIA asset.

When I received my briefing as staff associate, House Defense Appropriations Subcommittee, which required top secret clearance, I was told by senior members of the staff that the Washington Post was a CIA asset. Watching the Washington Post’s takedown of President Richard Nixon with the orchestrated Watergate story, that became obvious. President Nixon had made too many overtures to the Soviets and too many arms limitations agreements, and he opened to China. Watching President Nixon’s peace initiatives water down the threat level from the Soviet Union and Maoist China, the military/security complex saw a threat to its budget and power and decided that Nixon had to go. The assassination of President John F. Kennedy had resulted in far too much skepticism about the Warren Commission Report, so the CIA decided to use the Washington Post to get rid of Nixon. To keep the clueless American left hating Nixon, the CIA used its assets in the leftwing to keep Nixon blamed for the Vietnam war, a war that Nixon inherited and did not want.

END_OF_DOCUMENT_TOKEN_TO_BE_REPLACED

“As America weakens, Russia, Turkey, Iran and all the other countries that have been steamrolled by Washington will likely seek revenge.”

There has been a dramatic shift in how the United States government carries out its business internationally. Admittedly, Washington has had a tendency to employ force to get what it has wanted ever since 9/11, but it also sometimes recognized that other countries had legitimate interests and accepted there was a place for diplomacy to resolve issues short of armed conflict.

END_OF_DOCUMENT_TOKEN_TO_BE_REPLACED

SELCO: My Experience with Precious Metals During a Collapse

Last week, I read with interest the explanation for preppers about gold and silver. It was very informative and brought back some memories of my experience with precious metals, which I thought I would share with you.

I am aware that with this article, I might kill (or at least threaten) a few “sacred cows” but from time to time I do write similar articles about this topic. There are a lot of misconceptions about the usage of precious metals after a collapse.

END_OF_DOCUMENT_TOKEN_TO_BE_REPLACED

Some Hard Truth on Browder and Other Putin Enemies We are coming down to the moment when anybody who’s a hero in Washington will be an automatic supervillain in the world. America and her western allies have let criminals run amok for far too long. There are no better examples of this than the enshrinement of dastardly businessmen Bill Browder and Mikhail Khodorkovsky. Here’s a story where “birds of a feather” really do flock together.

The New Yorker wants privateer investor Bill Browder to be seen wearing a red cape and blue tights. And New America Foundation fellow Joshua Yaffa, he wants to be his Lois Lane. Yaffa’s latest anti-Putin rant entitled “How Bill Browder Became Russia’s Most Wanted Man” attempts to portray Vladimir Putin as Lex Luther and Browder as Superman. Reading the piece again as I write this I feel the hatred from Yaffa; it’s a kind of desperate avarice he must feel against Russia’s leader.