The Syria connection to Iran, Afghanistan and China 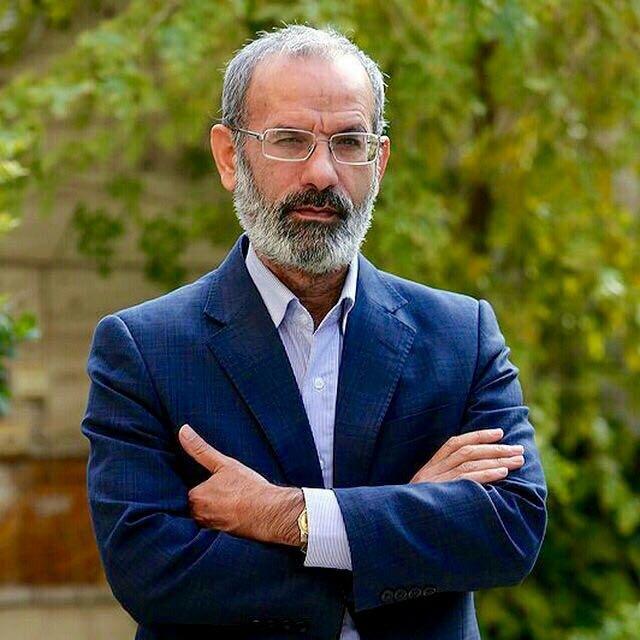 Iranian academic spells out Iran’s position in the Middle East and questions US policy toward the region; amid reports that the Qods force is unlikely to disband, and that Daesh (ISIS) is being moved the Afghanistan-Pakistan border

A crucial question has been consuming policymakers in Iran, Iraq, Syria and Lebanon: Does the Trump administration have a strategic plan for the Middle East or not?

Few are more apt to answer than Saadallah Zarei, dean of the Institute of Strategic Studies Andishe Sazan-e Noor in Tehran. Zarei, a soft-spoken, extremely discreet man I met in Mashhad a few days ago, happens to be not only one of Iran’s top strategic analysts but also a key brain behind the Islamic Revolutionary Guard Corps’ Qods Force commander Gen. Qasem Soleimani – the ultimate bête noire outside the Beltway.

END_OF_DOCUMENT_TOKEN_TO_BE_REPLACED

by Lee Fang, The Intercept: FOLLOWING THE REVELATION in March that Google had secretly signed an agreement with the Pentagon to provide cutting edge artificial intelligence technology for drone warfare, the company faced an internal revolt. About a dozen Google employees have resigned in protest and thousands have signed a petition calling for an end to the contract. The endeavor, code-named Project Maven by the military, is designed to help drone operators recognize images captured on the battlefield.

END_OF_DOCUMENT_TOKEN_TO_BE_REPLACED

The Global Economic System Is Being Setup To Crash

The US should learn the lesson of Iraq, President Bashar al-Assad said on Thursday, threatening to expel American troops from Syria and retake areas from its Kurdish allies. In the interview with RT, the Russian state’s international broadcaster, Assad raised the prospect of conflict with US forces if they do not leave Syria.

Assad’s Call for the Americans to Leave Syria Was Not an Imminent Threat of Action Against U.S. Forces, But a Reminder Regarding Their Costly Occupation of Iraq

END_OF_DOCUMENT_TOKEN_TO_BE_REPLACED As of this writing, the U.S. media has its knickers in a complete knot because of “Spygate,” the scandal evolving from the President of the United States exercising his constitutional powers to declassify secret intelligence documents bearing on the completely illegal investigation of his 2016 presidential campaign by the Obama White House, Obama’s intelligence chiefs, and their masters in the City of London.

In the view of the Anglo-American establishment, Trump is once again being insubordinate, refusing to be told what to do, unlike every American President since the death of FDR, with the exception of John F. Kennedy. So-called “experts” have been trotted out to sniff about “unsubstantiated,” “baseless” and “wild,” accusations, and “conspiracy theories,” propagated by the “unhinged” President of the United States. He aims, they say, to undermine the “rule of law,” which, according to them, emanates solely from the personage of Special Counsel Robert Mueller. These experts are taking their cues from former DNI James Clapper and Obama’s CIA Chief John Brennan and include numerous former staffers for Special Counsel Robert Mueller when he was at the FBI, who have become official commentators on CNN and other cable ventures. As we shall show you below, this amounts to letting the future inmates run the institution. They warn how dangerous and illegal the President is being in demanding that the “independent” Justice Department submit to oversight by the Congress and how dictatorial he has become by asserting that the President of the United States can declassify documents about a coup being run against his presidency. Turning Abe Lincoln on his head, they seem to think they can fool all the people, all the time.

END_OF_DOCUMENT_TOKEN_TO_BE_REPLACED

Flashback – Tommy Robinson: “If They Murdered Me… It Would Solve So Many Other Issues” 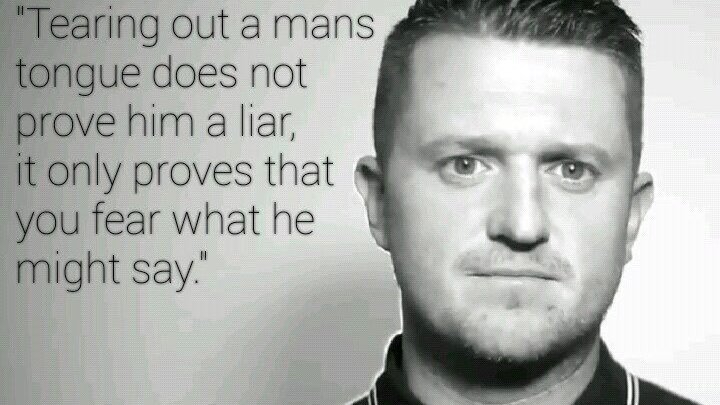 Look for reports to come out that Robinson will be beaten or possibly even murdered in prison. He’s already been denied due process and the press has been gagged in reporting the truth.

As Tommy Robinson has been arrested in the UK for basic free speech, you may recall that he once predicted how the corrupt Sharia-compliant leaders in his country might attempt to take him out of this world. In an older interview with The Glasov Gang, Robinson told what would happen if they murdered him.

END_OF_DOCUMENT_TOKEN_TO_BE_REPLACED

Italy is financially disintegrating. The banking world would not care except for one small detail: If Italy defaults in its debt obligations, it will set off a daisy-chain of OTC derivative credit default swap defaults resembling a financial nuclear holocaust. This chart of Deutsche Bank’s stock price reflects the growing risk of this event:

END_OF_DOCUMENT_TOKEN_TO_BE_REPLACED

The old question: When will she buckle?
Shares of Deutsche Bank fell 7.2% today in Frankfurt to €9.16, the lowest since they started trading on the Xetra exchange in 1992. They’re now lower than they’d been during its last crisis in 2016. And they’re down 71% from April 2015.

This came after leaked double-whammy revelations the morning: One reported by the Financial Times, that the FDIC had put Deutsche Bank’s US operations on its infamous “Problem Bank List”; and the other one, reported by the Wall Street Journal, that the Fed, as main bank regulator, had walloped the bank last year with a “troubled condition” designation, one of the lowest rankings on its five-level scoring system.

END_OF_DOCUMENT_TOKEN_TO_BE_REPLACED

They Had to Use a Wiretap- An overlooked text

Federal investigators from the D.C. U.S. Attorney’s office recently interviewed former FBI director James Comey as part of an ongoing probe into whether former FBI #2 Andrew McCabe broke the law when he lied to federal agents, reports the Washington Post.

nvestigators from the D.C. U.S. Attorney’s Office recently interviewed former FBI director James B. Comey as part of a probe into whether his deputy, Andrew McCabe, broke the law by lying to federal agents — an indication the office is seriously considering whether McCabe should be charged with a crime, a person familiar with the matter said. -Washington Post

END_OF_DOCUMENT_TOKEN_TO_BE_REPLACED

Jamie Dimon Goes Way Out of Town for Shareholders’ Meetings: For Good Reason 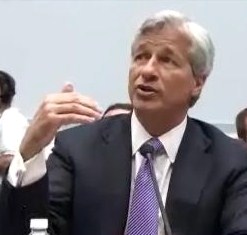 JPMorgan Chase likes to hold its annual shareholders’ meetings far away from the media glare of New York City’s pesky press corps. Jamie Dimon, Chairman and CEO of JPMorgan Chase, has good reason to want to dodge Manhattan’s investigative reporters – who might start to see a pattern of fraudulent behavior.

At the 2011 shareholders’ meeting in Columbus, Ohio more than 1,000 protesters descended on the event to protest the bank’s unsavory foreclosure practices. JPMorgan Chase’s 2013 shareholders’ meeting in Tampa – 1100 miles from New York City — came less than two months after the U.S. Senate’s Permanent Subcommittee on Investigations issued a 300-page report on how JPMorgan Chase had used its bank depositors’ money to gamble in risky derivatives in London, eventually losing $6.2 billion of that money. The 2014 shareholders’ meeting, also in Tampa, came four months after the bank pleaded guilty to two felony counts for its role in the Bernie Madoff Ponzi scheme (the bank failed to report to U.S. regulators the highly suspicious activity it knew Madoff was conducting in his business account at the bank). The bank had to pay $2.7 billion of its shareholders’ money to the government in fines and restitution in the Madoff matter.

END_OF_DOCUMENT_TOKEN_TO_BE_REPLACED

Have you noticed, fellow truth-seekers, how the information we are pursuing seems to be coming at us in fits and starts these days? How some investigations begin, are stalled, and others long forgotten return to the public eye? As we attempt to decipher and interpret revelations about behind-the-scenes sexual abuse and pedophelia among the powerful elite in our society, we might do well to imagine a larger, more coherent process taking place that adheres to the well-worn phrase: timing is everything.

Let us take, for example, the FBI’s recent release of documents from an investigation into billionaire hedge fund manager and convicted pedophile Jeffrey Epstein.

END_OF_DOCUMENT_TOKEN_TO_BE_REPLACED

An Oil Storm Is Coming, and Russia, the Saudis and Iran Hold All the Cards 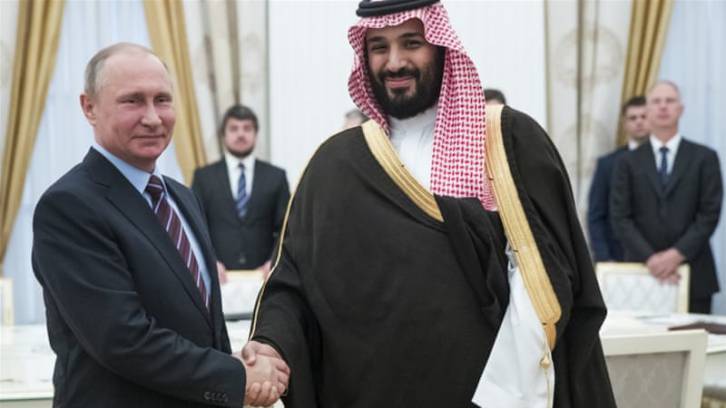 Russia and the Saudis are now in a position to decide whether oil price comes down or continues its rise, meanwhile Iran if attacked by the US-Saudi-Israeli axis can plunge the world’s oil supply into chaos and its financial markets with it

Russia and Saudi Arabia are in deep debate on whether to raise OPEC and non-OPEC oil production by 1 million barrels a day to offset the drastic plunge in Venezuela’s production plus possible shortfalls when new US sanctions on Iran kick in in November.