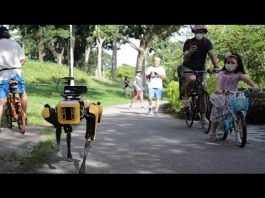 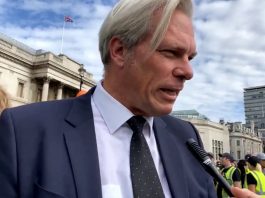 German Doctor Arrested In London For Telling The Truth

WATCH: Cop Holds Down Handcuffed Teen as Fellow Cop Kicks His Face In

A community is outraged after cellphone footage surfaced this week of an Ohio police officer holding down a handcuffed teenager while his fellow cop kicked him in the face.

Franklin Township, OH — Dramatic video has surfaced which will undoubtedly end up with taxpayers shelling out hundreds of thousands of dollars to an 18-year-old kid who ran from police. In spite of teen being handcuffed, face-down on the ground, with another officer on top of him, a Franklin Township police officer is seen punting his face like a football.

The suspect—turned victim, Anthony Foster Junior, allegedly made the terrible and dangerous decision to run from police earlier this week. According to police, Foster rammed a police car, drove 90 miles per hour through residential neighborhoods, and tried to make police officers crash.

END_OF_DOCUMENT_TOKEN_TO_BE_REPLACED The squabbling between self-identified progressives and conservatives continues as social media transforms itself into a news, information, and opinion gatekeeper.

All information that contradicts the establishment narrative will either be downgraded into obscurity of excluded outright on social media.

Take for instance ThinkProgress, the Soros-financed news website, a project of the Center for American Progress Action Fund welded to the infrastructure of the Democrat party. On May 2, it complained that a bias study at Facebook will be run by conservatives, that is to say establishment Republicans, notably former Arizona Congress critter Jon Kyl.

END_OF_DOCUMENT_TOKEN_TO_BE_REPLACED

IN JANUARY 2017, FACEBOOK BEGAN MAKING ALGORITHM CHANGES TO MAKE SURE CONSERVATIVE AND CHRISTIAN NEWS WAS NO LONGER SO INFLUENTIAL. NOW THE END BEGINS FACEBOOK TRAFFIC HAS CONSISTENTLY DECREASED WITH EACH ALGORITHM CHANGE.

“The instruments also of the churl are evil: he deviseth wicked devices to destroy the poor with lying words, even when the needy speaketh right. But the liberal deviseth liberal things; and by liberal things shall he stand.” Isaiah 32:7,8 (KJV)

EDITOR’S NOTE: In Nazi Germany, when Hitler wanted to “rank” the Jews, he made them all wear a yellow star as they were placed into ghettos. Now Facebook founder and CEO Mark Zuckerberg wants to do the same thing to Conservative and Christian voices on his social media site. His ‘yellow star’ is a new ranking algorithm which will separate out Conservative and Christian posts, identify them as ‘fake news’ no matter the actual content, and then assign them their place in the Facebook ‘ghetto’ where very few if anyone will ever actually read them. Zuckerberg says that this will “restore trust” to Facebook in much the same way that Hitler told the Jews that going in to the shower would refresh them. What he didn’t tell them that the showers were actually gas chambers. Before the purge began in early 2017, NOW THE END BEGINS had an average of 2 million views per month. Now we average around 500,000 which has resulted in a 75% drop in revenue from ad placement. That’s why we started the fundraiser last year. Eventually, Conservatives and Christian voices will be eliminated altogether from platforms like Facebook, but until we are, we will continue to expose the darkness of the times in which we live.

END_OF_DOCUMENT_TOKEN_TO_BE_REPLACED

As US Congresswoman Calls For Kanye West To Get Back To The Plantation, Vile Left Calls For ‘Crips’ To F**k Him Up’ 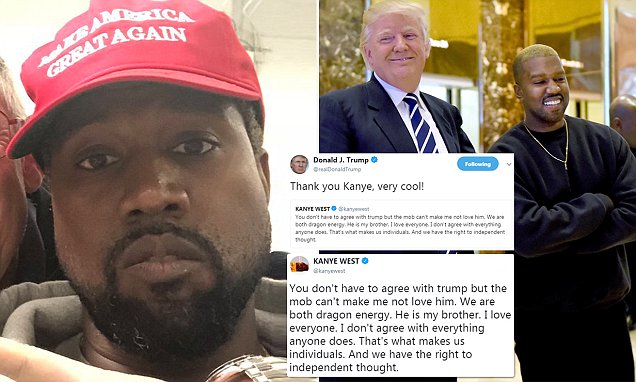 Let me begin by making a couple of things clear at the outset. I am not a fan of Rap music, therefore I never paid much attention to Rap stars or celebrities. I am more a classic Rock fan, so sue me! Secondly, just because Kanye West is awakening a whole generation to the thought that they don’t have to “belong” to one party or the other, they are not “victims” just because they were born a certain race, does not make him a conservative. He is not.

On the flip side, his recent foray into politics by announcing he was free to “think” for himself, thank you very much, and everyone else should be just as free, and the massive attacks against him by celebrities, other black musicians, liberals, and now a direct attack by Democratic politician Maxine Waters, shows pretty conclusively that he is not a full-fledged liberal either, he is more like an Independent, speaking up and out about issues, rather than allowing any party to force him to follow the party line.

With all that said, kudos must be given to Kanye for opening up a national discussion, in a huge way, ever since he uttered the “seven words that broke the Internet,” when he he praised conservative Director of TPUSA Candace Owens, by saying “I love the way Candace Owens thinks.”

END_OF_DOCUMENT_TOKEN_TO_BE_REPLACED

WATCH: Cops Arrest Grieving Mother, Keep Her from Seeing Her Dying Son in the Hospital

When a mother rushed to the hospital after she heard that her son was shot, staff refused to allow her to see him, and then police arrested her for “causing a disturbance.”

When a mother received the call that her teenage son had been shot and rushed to the hospital, she dropped everything and went to see him. When she arrived, hospital personnel refused to let her see her dying son and when she begged in protest, she was arrested and taken away by police.

Nylik Moore was just 18 years old when he was shot in the back and the arm, causing injuries that took his life. When his father called his mother, Cheirha Rankins, and told her the news, she rushed to York Hospital, just a few blocks from their home.

END_OF_DOCUMENT_TOKEN_TO_BE_REPLACED

Why The Chinese Big Brother Orwellian State Got Worse And Is Already Here In U.S

Facebook Is Now Ranking News Organizations Based on ‘Trustworthiness’ 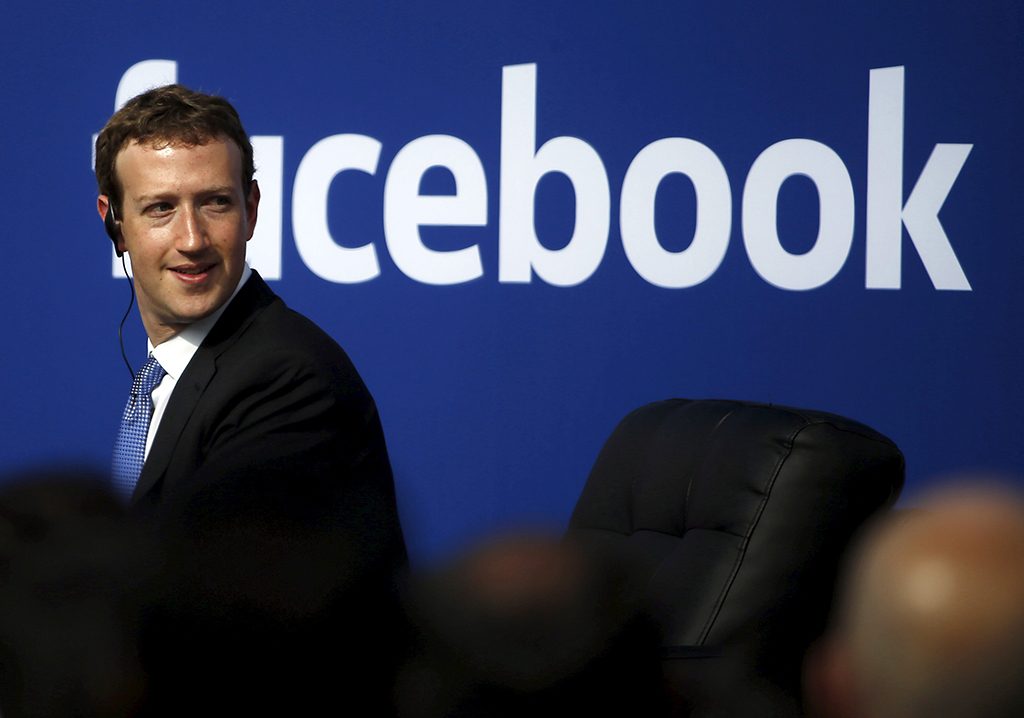 “We put [that data] into the system, and it is acting as a boost or a suppression, and we’re going to dial up the intensity of that over time,” declared Zuckerberg during a speech at the Rosewood Sand Hill hotel, with media executives in the audience on Tuesday. “We feel like we have a responsibility to further [break] down polarization and find common ground.”

END_OF_DOCUMENT_TOKEN_TO_BE_REPLACED

POLICE CADETS EXPOSE DEPT. FOR TRAINING COPS TO VIEW PUBLIC AS ‘COCKROACHES’ THEY ARE AT WAR WITH

According to a group of 10 former Austin Police Department recruits who wanted to become peace officers, just like the military, the Austin PD is training “warriors” instead of “guardians.” Although this should hardly come as a surprise because the Supreme Court has already declared that cops don’t have to protect or “guard” you at all. They are to follow orders, extort (and sometimes flat out steal) money for their department, and enforce laws that are often tyrannical and the very definition of a human rights violation.

END_OF_DOCUMENT_TOKEN_TO_BE_REPLACED It’s a trend that is quickly becoming accepted reality – biometric identification at U.S. airports. However, until now, it has been marketed either as an elective measure for preferred travelers who wish to expedite clearance or for inbound international travelers.

As I previously reported, U.S. Customs and Border Protection has a mandate that’s been 15 years in the making to integrate government databases for ID verification. Private companies have been enlisted to ensure that there is a “quick and easy roll out across U.S. airports,” according to Jim Peters, chief technology officer for SITA, one of the information technology companies working with airlines.

END_OF_DOCUMENT_TOKEN_TO_BE_REPLACED

“Big Brother does not watch us, by his choice. We watch him, by ours. There is no need for wardens or gates or Ministries of Truth. When a population becomes distracted by trivia, when cultural life is redefined as a perpetual round of entertainments, when serious public conversation becomes a form of baby-talk, when, in short, a people become an audience and their public business a vaudeville act, then a nation finds itself at risk; a culture-death is a clear possibility.” — Professor Neil Postman, Amusing Ourselves to Death: Discourse in the Age of Show Business

What characterizes American government today is not so much dysfunctional politics as it is ruthlessly contrived governance carried out behind the entertaining, distracting and disingenuous curtain of political theater. And what political theater it is, diabolically Shakespearean at times, full of sound and fury, yet in the end, signifying nothing.

END_OF_DOCUMENT_TOKEN_TO_BE_REPLACED 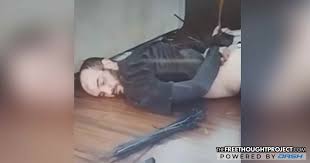 When police refused to investigate a man who was harassing a young girl, her parents tracked him down and arrested him—now they are the only ones facing charges.

Port Alberni, CA — The parents of a 13-year-old girl, who was being harassed by an older man, are now facing criminal charges after they decided to take matters into their own hands after the police refused to help them track down the predator.

According to a report from CTV News, the parents begged the Port Alberni Royal Canadian Mounted Police (RCMP) to determine the identity of the man who was texting their daughter. After weeks of apparent frustration, the determined couple then lured the man to their home, all the while pretending to be the daughter desiring to have sex with him.

END_OF_DOCUMENT_TOKEN_TO_BE_REPLACED

Google: No ads that “refer to Jesus and/or the Bible” | Ben Davies