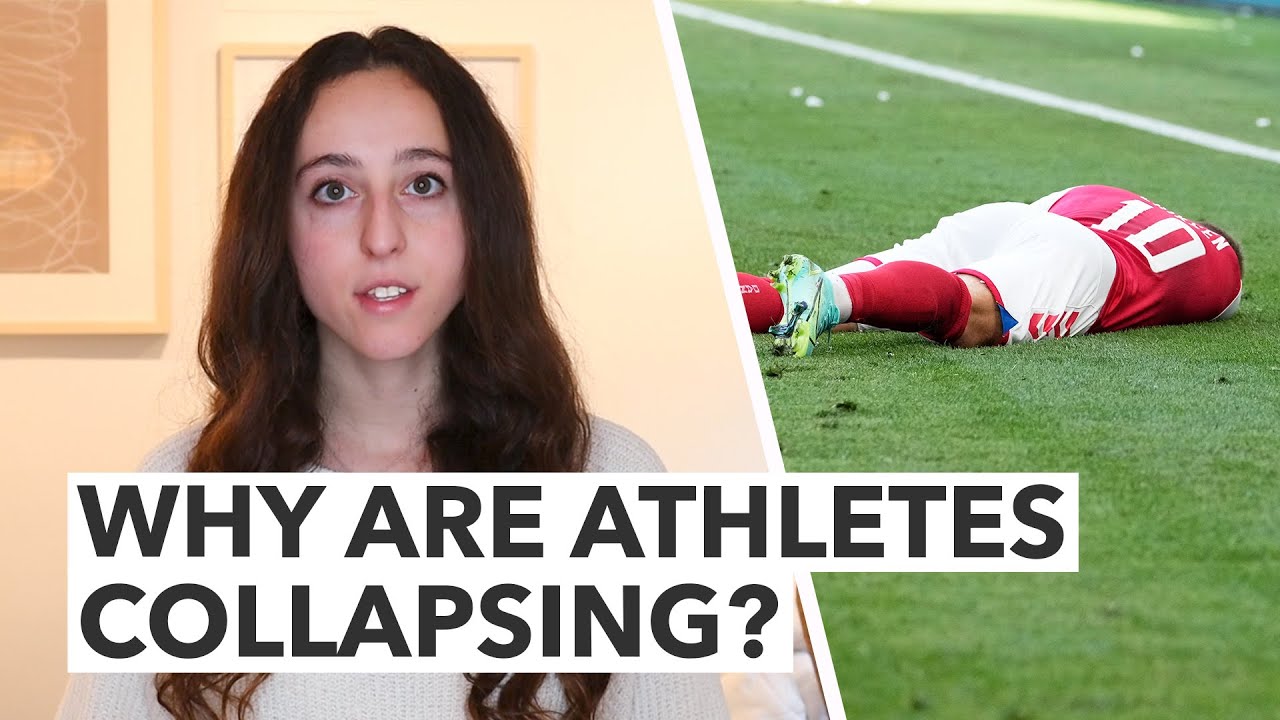 With every passing day, the list of people suffering tragic consequences from the COVID mRNA shots grows longer. As of December 23, 2022, the U.S. Vaccine Adverse Events Reporting System (VAERS) had received 33,334 reports of post-jab deaths, 26,045 cases of myocarditis and 15,970 heart attacks.1

Many of these people and their stories have remained hidden from public view as social media have universally censored these stories. As a result, people who only read mainstream media are largely unaware of the damage being done. However, there is a population of people whose injuries and deaths have been far more public.

Over the past two years (2021 through 2022), more than 1,6502,3,4,5,6,7 professional and amateur athletes have collapsed due to cardiac events and 1,1488 of them proved fatal. In his book “Cause Unknown: The Epidemic of Sudden Deaths in 2021 and 2022,”9 Edward Dowd writes extensively about the anomalous number of deaths now occurring among athletes, which, despite “fact checkers” best efforts to dismiss it as “normal,”10,11 is anything but.

What Happened to Damar Hamlin?

More than likely, you’ve heard that Damar Hamlin, a 24-year-old Buffalo Bills football player went into cardiac arrest on live television after making a tackle during a January 2, 2023, game against the Cincinnati Bengals.12,13 Team trainers and emergency medical staff performed CPR for more than nine minutes, which saved his life. After initially being placed in a medically-induced coma, Hamlin was reportedly on the mend within a week.14

Whether the COVID jab played a role in what happened to Hamlin is impossible to know for sure. Looking at the replays, it’s clear he took a very severe hit right to the chest right before his collapse, and this certainly could have caused the heart attack. At bare minimum, it’s not unheard of. Former Pittsburgh Steelers linebacker had a similar incident in 2017, as did hockey legend Chris Pronger in 1998.15

On the other hand, it’s also not inconceivable that the COVID jab — if Hamlin was in fact “vaxxed” — could have affected his heart, thereby playing a contributing role. We now know the COVID shot is associated with a significantly elevated risk of myocarditis, which in turn raises the risk of sudden cardiac death in contact sports.16

While the NFL enforced strict COVID jab rules for employees who have contact with players, the players and coaches were not subject to mandates.17,18 That said, 95% of players did get the shot, according to the NFL league.19

In a January 4, 2023, Children’s Health Defense interview, Dr. Peter McCullough, a cardiologist and internist, reviewed what could have happened in Hamlin’s case. As noted by McCullough, a condition called commotio cordis (Latin for “agitation of the heart”) is known to occur in baseball when a player is hit hard on the breastbone, thereby causing cardiac arrest. There are approximately 20 to 30 such cases each year.

However, no such case has ever occurred in 100 years of pro football. Football players have padding that protects the breastbone, so in McCullough’s view, commotio cordis can likely be ruled out. The more likely cause for Hamlin’s cardiac arrest, he believes, is hypertrophic cardiomyopathy (HCM), or abnormal thickening of the heart muscle, which is the primary cause for athletes suffering cardiac arrest.

The reason why HCM is the No. 1 cause of cardiac arrest in professional athletes is because it causes few if any symptoms and often goes undiagnosed. Professional athletes undergo extensive medical evaluation and cardiovascular screening20 before being given the green-light to play, and they also constitute the healthiest segment of society in general,21 so most heart problems are ruled out before they ever enter the field.

“The elephant in the room,” however, according to McCullough, is the COVID jab. Before these shots were rolled out, the average number of cardiac arrests in all European soccer and football leagues combined was 29 per year. Since the advent of the COVID shots, 1,598 European pro athletes have suffered cardiac arrest, giving us a comparative annual tally of nearly 800. Of those 1,598 cardiac arrests, 1,101 were fatal.

McCullough detailed these and other stats in a December 17, 2022, letter to the editor of the Journal of Scandinavian Immunology. The paper was co-authored by Panagis Polykretis, Ph.D., a researcher at the Institute of Applied Physics, which is part of the Italian National Research Council.22 McCullough and Polykretis have been, and still are, calling for a proper investigation of these deaths.

McCullough and Polykretis suspect COVID jab-induced myocarditis is the explanation for this otherwise inconceivable increase in cardiac arrests among athletes, and McCullough believes it also tops the list of potential reasons for Hamlin’s cardiac arrest, considering 95% of NFL players had received the jab as of March 2022.23

McCullough cites research showing about 2.5% of COVID jab recipients sustain heart damage, 90% of them being men. And, in about half of all jab-related myocarditis cases, there are no symptoms to alert you there might be a problem. As explained by McCullough, myocarditis causes scarring on the heart, and it is this scarring that causes an abnormal electrical rhythm (ventricular tachycardia) and sudden adult death syndrome.

There are now more than 200 scientific papers on jab-related myocarditis. A January 2023 study24 in the European Journal of Pediatrics found high levels of circulating spike protein in 16 male high school students hospitalized with myocarditis induced by the shots, which again suggests the spike protein your body produces is a key pathogenic factor.

McCullough explains in greater detail how the shot may have triggered Hamlin’s cardiac arrest: During play, adrenaline is pumping, and when the heart is damaged this adrenaline rush is what triggers the cardiac arrest.

This helps explain not only the death of athletes on the field, or people dying while jogging, but also why so many are dying in their sleep, because adrenaline is released between 3 a.m. and 6 a.m., as your body readies to wake up.

1,696% Increase in Sudden Death Among Athletes

Whatever caused Hamlin’s cardiac arrest — and hopefully a careful medical investigation after his recovery will clarify what happened — there’s no doubt that athletes in general are dying in far greater numbers now than ever before. 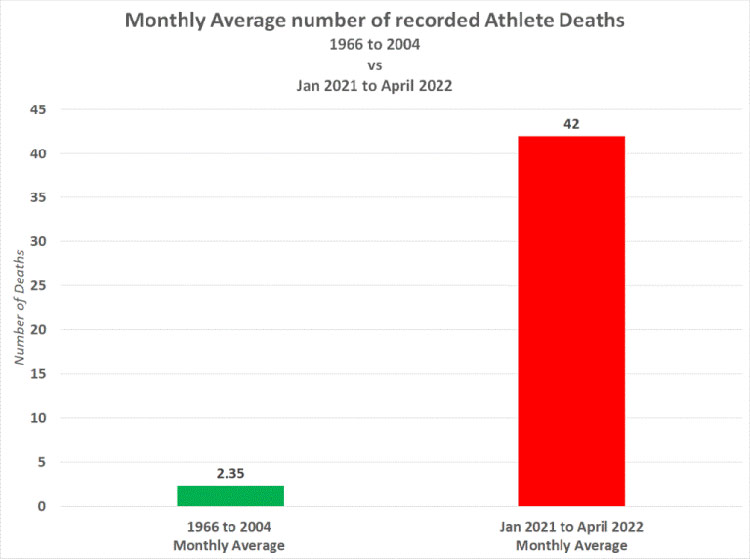 The following graph illustrates the rise in recorded athlete collapses and deaths between January 2021, the month the COVID shots started to roll out, and April 2022. 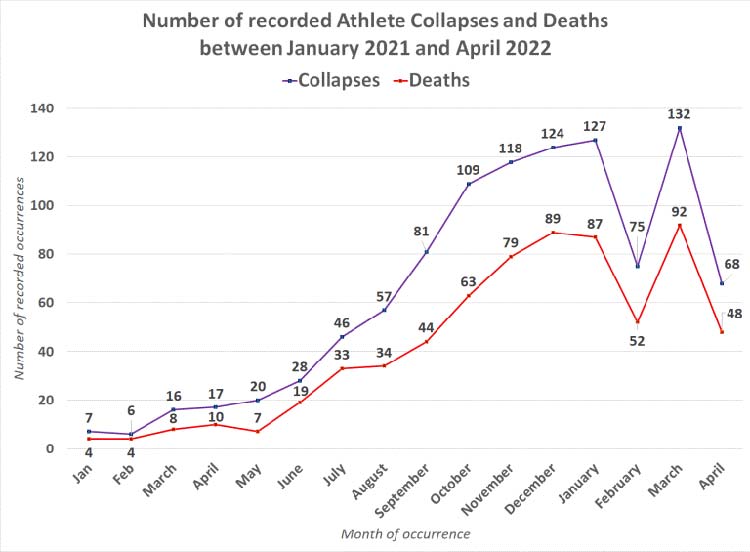 As noted by The Exposé:27 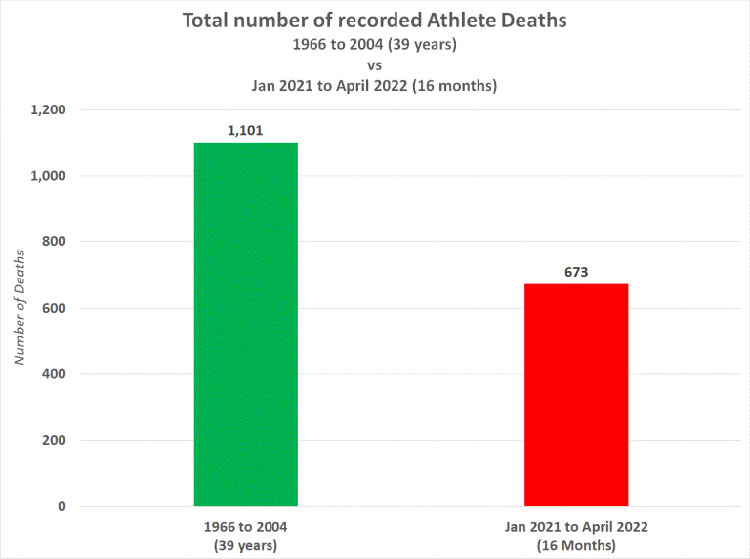 The yearly average number of deaths between 1966 and 2004 equates to 28. January 2022 saw three times as many athlete deaths than this previous annual average, as did March 2022. So this is obviously highly indicative of a problem.

However, if we divide the 66 to 04 annual average by 3 to make it equivalent to the first four months’ worth of deaths in 2022, we get 9.3 deaths. So in effect, by April 2022, deaths among athletes were 10x higher than the expected rate …

A nearly 1,700% increase in sudden cardiac-related death among athletes is inexplicable unless you take the experimental COVID jabs into account. Research28 published in November 2021 found inflammatory markers — signs of cardiovascular damage — rose dramatically after the second COVID shot, and the risk of heart attacks and other heart-related problems more than doubled in the months following these injections.