We’re going to look at two different data sets released today that show from different perspectives how tight the labor market still is, how much power has shifted from employers to workers, how much job-hopping and churn is still going on, and that the tech layoffs are still not large compared to the gigantic overall labor force, and that most of the laid-off people are getting quickly absorbed by other companies, including by non-tech companies that employ armies of tech workers, such as automakers, industrial companies, oil and gas companies, etc. These companies have gotten outcompeted for tech talent by the lavish compensation packages offered by tech companies. And those non-tech companies are now hoping for better access to the tech labor pool.

The reason for the still huge amount of job-hopping and churn is the promise of the greener grass on the other side of the fence, despite large pay increases for people who stayed.

And the grass is still greener, a sign of aggressive recruiting by employers. The median annual pay of workers who changed jobs increased by 15.1% in November; while for workers who stayed in their jobs, it increased by 7.6%, according to the ADP National Employment Report today. But this huge pay increase for job hoppers was down by about 1 percentage point from the 16%-plus range earlier this year – a sign that perhaps a little more caution has entered into the hiring equation. 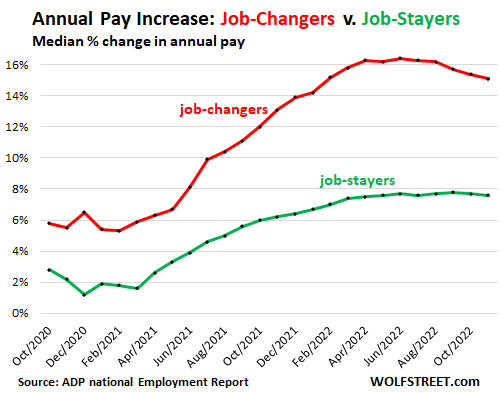 Fed Chair Jerome Powell in his speech today dedicated considerable time describing the issues of the still far too tight labor market – including the still huge number of job openings and just how little cooling was actually visible.

While they remain in the astronomical zone, they have come down by about 1.5 million from the peak in March 2022 – and this includes a portion in the tech sector where the layoffs have been, as we’ll see in a moment. 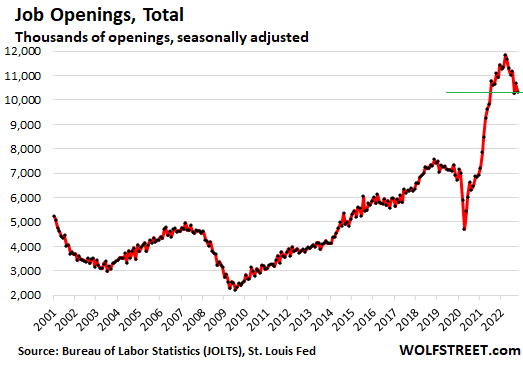 Layoffs & discharges rose by 58,000 in October, after having fallen more than that in September, and were still lower than in August. Employers reported that they laid off and discharged for whatever reasons 1.39 million employees, and while that sounds like a lot, it is historically low in the huge work force in the US, and down by 23% from October 2019, which had already been a tight labor market: 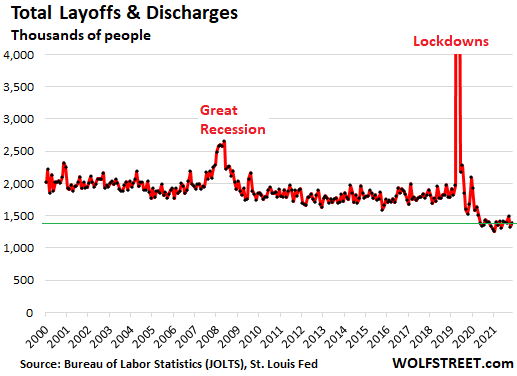 Most people that were laid off found new jobs quickly in this sea of job openings, and we see this everywhere, including in the actual number of people who filed for unemployment insurance with their state unemployment offices.

The number of initial claims for unemployment insurance, at 240,000 last Thursday, was up from prior weeks, but was still below where it had been in August and July, and was in the same low range where it has been all year, and historically low.

In other words, most of the people who were laid off found a job so quickly or already had a new job lined up that they didn’t file for unemployment compensation.

When looking back at the past decades, we can see that the number of initial unemployment claims would have to rise well above the 300,000-mark before the labor market begins to soften meaningfully: 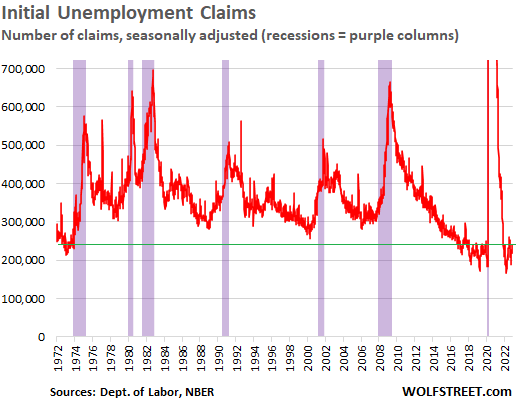 Voluntary “quits” dipped for the second month in a row, to 4.03 million, the lowest since May 2021, a sign that employees are getting a little more cautious about riding the job-hopping train, and perhaps a sign that some job openings to hop into have vanished.

But the number of quits is still historically high, up by 18% from three years ago, and still far higher than at any time begore 2021, a sign that workers are still arbitraging the labor market in large numbers to increase their pay – and they did increase their pay as the ADP data above for job changers shows: