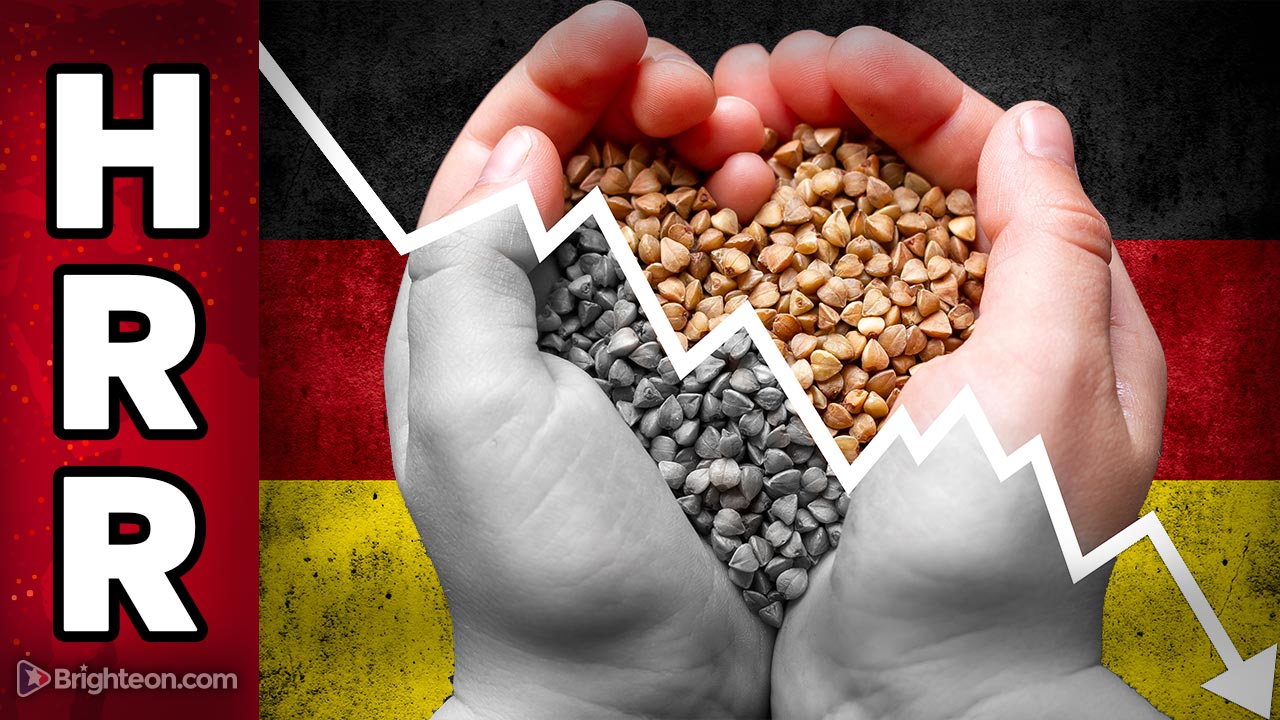 Over the last year, the green tyranny bureaucracy of the EU has managed to nearly destroy Western Europe’s energy relationship with Russia, leaving the continent desperate for energy inputs to keep its power grid functioning. Now, the food supply of Europe is under direct assault via multiple schemes that seem designed to end affordable food at the same time electricity is becoming unaffordable for businesses and residential households alike.

“Germany bans farmers from properly fertilising land to serve EU green agenda,” declares Breitbart.com. “As of Thursday, the use of nitrate fertilisers has been greatly restricted for large swathes of farmland in North Rhine-Westphalia,” the site reports, referring to one of the most abundant food production areas in Germany.

Green tyrants are at war with the Table of Elements, and they really despise Nitrogen and Carbon

The ban originates with EU bureaucrats waging war on nitrogen, the essential element that makes up nearly 80% of Earth’s atmosphere and is critical for crop production. After having declared war on carbon — the building block of biological life — globalists are now targeting nitrogen as a means to deliberately engineer widespread famine and mass death (depopulation).

Nitrogen-based fertilizers produce the food that feeds around 4 billion people on planet Earth (source: OurWorldInData.org, see table below). Without nitrogen fertilizers, literally half the world’s existing population would starve to death. Germany’s farmers have so far been ordered to cut nitrogen use by 20 percent, but this is just the first stage. As with all such programs, soon the government will demand more cuts, and it won’t be long before nitrogen fertilizers are nearly banned across EU countries thanks to the “climate cult” that’s now in charge of policy. 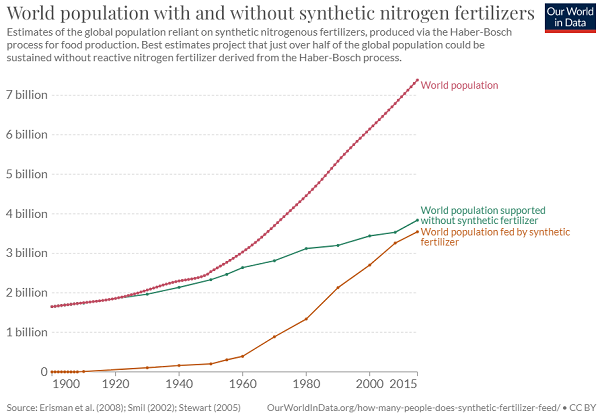 The nation of Sri Lanka recently tried to outlaw the importation of nitrogen-based fertilizers, and that police move let to a catastrophic collapse of the nation’s economy, government, transportation, finances and rule of law. Mass uprisings, were widespread while food from farms rotted in the fields due to lack of fuel supplies and a functioning means of transportation. Even the trains were taken offline.

Via NaturalNews.com, Sri Lanka is ground zero for the UN’s war on fertilizer – they want to starve the entire planet:

UNEP’s acting director in 2019 declared that the reason food production needs to be drastically cut is because of mankind’s “long-term interference with the Earth’s nitrogen balance.” Humans, in other words, have to die in order to save the planet.

One month after that meeting, Sri Lankan voters elected the H.E. Gotabaya Rajapaksa as president. An anti-fertilizer president, Rajapaksa declared, without any evidence, that synthetic fertilizers are causing kidney diseases. Two years later in April 2021, he banned all imports of fertilizer.

Rajapaksa once again declared that all “chemical fertilizers … lead to adverse health and environmental impacts,” a claim that would quickly be exported as a new policy for The Netherlands and other countries aiming to go “green.”

“Rice production fell 20%, prices rose 50 percent, and the nation had to import $450 million worth of the grain. In Rajanganaya, where farmers operate on just a hectare (2.5 acres), of land on average, families reported producing half their normal crop harvest.”

The hardest hit area of Sri Lanka’s food economy is tea, which before the ban generated $1.3 billion in exports and provided 71 percent of the nation’s food imports.

“After the fertilizer ban, tea production crashed 18%, reaching its lowest level in 23 years,” Shellenberger adds. “The government’s devastating ban on fertilizer thus destroyed the ability of Sri Lanka to pay for food, fuel, and service its debt.”

EU bureaucrats were obviously aware of this, yet they somehow concluded it was the perfect model for what they plan to do to Europe: Engineered famine followed by societal collapse. And unless they change course, this is exactly the outcome they’re going to achieve. From Breitbart.com:

“What this shows you is that the will of the people means nothing to our government,” political commentator Eva Vlaardingerbroek told Breitbart. “Despite all of the protest and (inter)national backlash, they’re pushing through with what I think are criminal policies.”

“Our government doesn’t cater to the wishes of its own citizens, it caters to globalist institutions whose interest it is to control the food supply, so they can control us,” she continued. “It’s the great reset in full force.”

The food and energy scarcity is reaching alarming tipping points, especially among the poor. As WinePressNews.com now reports, people in Wales are literally eating pet food and heating such meals with candles, since they can’t afford proper food or electric heat:

British families are becoming so strapped for cash and desperate for food, some have begun to eat pet food instead and heated up by candle light.

Wales Online wrote, ‘Mr. Seed describes an “arc of poverty” from the east to the west of Cardiff where residents still really struggle financially despite the rest of the city’s success. He said his customers were “working every hour they can” just to afford the essentials, but the rising cost of living makes this difficult.’

This so-called arc of poverty is expanding, of course, as food inflation worsens and electricity prices continue to climb due to engineered energy scarcity. Importantly, the higher price of food and energy has all been achieved by design as part of the new globalist depopulation scheme to rid the world of (most) humans. Food scarcity has been weaponized by genocidal globalists, and thousands of farms are being forced to close across the EU, including in The Netherlands where the same nitrogen excuse is being used to shutter productive farming operations. Via PeterSweden’s substack:

The Dutch state has announced that they plan to seize some 3,000 privately owned farms by forcing them to sell their land to the state and then just shut them down. Farmers and the government have been in dispute for months over the new climate goals that will force thousands of farmers to sell their land to the state. …The government has estimated that in total, some 11,200 farms will have to close in order to meet the new climate goals, and another 17,600 farms will have to significantly reduce their livestock numbers.

Climate cultists have now declared war on farming and food

At first, climate cultists claimed CO2 was the primary threat to planet Earth, but now they claim food is destroying the planet. That’s why the means of food production are being systematically targeted and shut down. It’s all being done on purpose, and the planned goal is, of course, mass famine and collapse.

It’s not yet clear where climate cultists think their food will come from after farming operations are deliberately shuttered, but these bureaucrats are not known for anticipating the ramifications of their actions in the first place. In essence, the climate cult is a suicide cult. Their goal is the near-total extermination of the human race on planet Earth, and nitrogen is the element they’re now targeting to try to justify their genocide in the name of “climate science.”

As PeterSweden reports via his outstanding Substack page, the government is using violence to try to stop farmers from peacefully protesting:

The farmers have not been reacting all too gladly to this news, with farmers taking to the streets to protest, using their tractors to blockade. The police have already used heavy machinery to tip over tractors with farmers inside. When farmers stood peacefully to protest, police swept in and threw them in black vans.

Many of the farms in the Netherlands are family run and have been handed down for generations. They survived the German occupation only now to be seized by their own government under the excuse of climate change.

This is tyranny. The last time something like this happened under Mao and Stalin, millions of people died from starvation.

I have said this before and I will say it again. This is Climate Communism.

Get the full analysis in today’s Situation Update podcast

In today’s podcast, I cover this and many other topics in more detail:

– German government forcing farmers to slash nitrogen fertilizer usage on farms
– This is FORCED FAMINE, right out in the open
– People in Wales now EATING PET FOOD because that’s all they can afford
– Some are HEATING food with candles because they have no power
– What pet food would you eat if that were your last remaining option?
– Mathew Crawford explains how “Chaos Agents” are infiltrating health freedom movement
– Scientific study reveals no difference between N95 masks and high-end medical masks
– Cloth masks revealed as essentially useless
– Sen. Rand Paul exposes Fauci for complicity in mass murder of 7 million human beings
– Planned Pedo Parenthood sex-ed director claims children are BORN as “sexual” from day one
– Elon Musk’s “neuralink” tech caused monkeys to chew their fingers off
– Switzerland to BAN electric vehicles when power grid is strained
– Interview with James Roguski