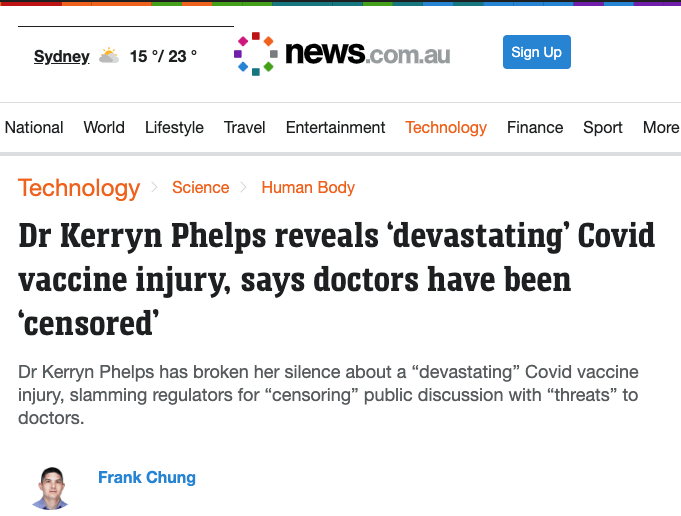 SOTN Editor’s Note: The most promising aspect about this “EARTHSHAKING COVD VAX DEVELOPMENT” now taking place in Australia is this: It’s got legs! Not only that—it’s got millions upon millions of legs. But how so? Listen carefully! The countless political leftists, liberals, socialists, communists, bolsheviks, anarchists and democrats who were used by the Khazarian Cabal to tyrannically impose the Covid Super Vaccination Agenda on one nation after another, one state after another and one city after another, are all full of paralyzing fear. The same extreme fear that compelled them to take an extremely risky and experimental COVID-19 ‘vaccine’ is now being flipped against the exceedingly dangerous and often deadly Covid injections (see article posted below).

Similarly, the overwhelming panic, which the same leaders experienced that motivated their ordering of mandates to unlawfully foist the EUA vaccinations on the general public, is now morphing into dread. Why dread? Because as they themselves suffer from the panoply of new medical ailments and health conditions, strange diseases and scary syndromes, debilitating symptoms and exotic illnesses, which only occurred after their Covid shots and boosters, they know that the citizenry is undergoing the same terrible fate. Which is why these apparatchiks are now slowly turning against their Khazarian overlords. For the time has finally come when those political hacks and henchmen will become much more afraid of righteously ferocious people power right next door than they are of a distant New World Order globalist power across the pond. Hence, the entire planetary civilization is about to witness an unparalleled sea change which will ultimately produce a tsunami of citizen rebellion and populist revolt—EVERYWHERE! For example, the totalitarian American Healthcare System is quite likely soon to be demolished by the U.S. citizenry as the Medical Mafia is hunted down in all 50 states … … … if the Khazarian Cabal does not first execute a controlled demolition of the Global Economic & Financial System … or trigger a full-scale World War III between the East and the West, the Global South and Industrialized North, the BRICS Alliance and the Zio-Anglo-American Axis, Russia and NATO, etc. That’s right, folks, we are all staring into a future that looks like Armageddon or the Apocalypse or the Great Tribulation … unless the collective consciousness of all of humanity sufficiently awakens so that the world community of nations forever banishes the Khazarian Cabal to an off-planet waterless region for a few eternities. And, “NO!”, we are NOT joking.

N.B. It ought to be evident, from the MSM article posted below, that the former president of the Australian Medical Association is scared out of her wits. The clear and present danger that Dr. Kerryn Phelps now poses to the Australian Federal Government, Big Pharma, World Economic Forum and various UN bodies such as the World Health Organization is really quite extraordinary. And, she would only cut such a fearsome public profile if she truly believed there was no other way out of her very precarious predicament.

Former federal MP Dr. Kerryn Phelps has revealed she and her wife both suffered serious and ongoing injures from Covid vaccines, while suggesting the true rate of adverse events is far higher than acknowledged due to underreporting and “threats” from medical regulators.

In an explosive submission to Parliament’s Long Covid inquiry, the former Australian Medical Association (AMA) president has broken her silence about the “devastating” experience — emerging as the most prominent public health figure in the country to speak up about the taboo subject.

“This is an issue that I have witnessed first-hand with my wife who suffered a severe neurological reaction to her first Pfizer vaccine within minutes, including burning face and gums, paraesethesiae, and numb hands and feet, while under observation by myself, another doctor and a registered nurse at the time of immunisation,” the 65-year-old said.

“I continue to observe the devastating effects a year-and-a-half later with the addition of fatigue and additional neurological symptoms including nerve pains, altered sense of smell, visual disturbance and musculoskeletal inflammation. The diagnosis and causation has been confirmed by several specialists who have told me that they have seen ‘a lot’ of patients in a similar situation.”