by Jack Gleason, All News Pipeline:

“The LIMITS OF TYRANTS are prescribed by the ENDURANCE of those whom they oppress.”

Our country may be nearing the conclusion of the most dangerous game of political “chicken” in history.

We have just experienced the second great election steal in two years. Will the Uni-Party of Democrats and RINOs succeed in evaporating the Red Wave?

RINO politicians and media are complaining that the conservatives were too lazy to vote in November, but Republicans, Independents and even Democrats turned out in such huge numbers that the cheating had to be so blatant that it is now impossible to overlook. The “big four” shows on FOX, normally famous for exposing Democrat stupidity and corruption, could have focused on the fraud in a different city or state for each segment since the election, but instead have prattled on about every shiny object EXCEPT 2022 fraud.

Will corrupt legislators, governors and politicians succeed in quashing the protests and legal challenges?

We are seeing a very disturbing trend where corrupt governments are using the tool of freezing bank accounts in order to punish protests. Canada did this with their truckers’ strike, Brazil is freezing assets of businessmen who supported protesters of their recent election which seems to have been stolen. Will protesters in the United States have their bank accounts seized?

But all is not lost. A series of developments is providing hope that the entire web of deceit, manipulation and corruption may soon be unraveled. People all over the world are figuring out what is going on with tainted elections and are protesting. 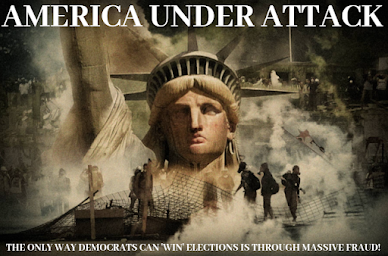 In Brazil, fraud using the exact same techniques, including unsecured voting machines, has been discovered in their recent presidential election, where the socialist candidate, who had been charged with illegalities, was exonerated by Brazil’s corrupt Supreme Court and allowed to run for office. There have been massive protests and strikes throughout the country.

The news about the fraud in the November 8th elections continues to leak out on a few fearless websites including video evidence on Rumble.com and BitChute.com. Thousands have reported voting irregularities that have yielded results that are mathematically impossible without rampant cheating. Democrats themselves have stated repeatedly that our voting machines are easily hacked and manipulated.

The wheels on the bus may be coming off – four Arizona counties delayed their election certifications, which means Arizona can’t certify the election until their issues are resolved and voting machines are inspected.

In Pennsylvania’s Delaware County, election “officials took a detour on election night with the county’s ballots and v-drives into a closed building for six hours. Poll watchers were prevented from entering the building at the time.” Legal complaints have been filed.

In California, the non-partisan Election Integrity Project has been granted “standing” to file their lawsuit alleging that years of election law changes in the state have led to voter disenfranchisement.

But the tilting of the scales against conservative candidates isn’t limited to just the Democrats. The RNC is accused of distributing a flawed database to volunteers in Wisconsin and other states with information that was so out of date it was worse than useless.

The GOP Senate and Congressional campaign committees are supposed to remain strictly neutral in primaries, but Anthony Sabatini writes in “Chronicles,” “To the surprise of few, it was recently revealed that Senate Minority Leader Mitch McConnell spent a considerable portion of his $180 million war chest to help establishment Republicans defeat America First candidates in the GOP primary elections.”

When his candidates lost, McConnell withheld funding for the winners.