The social media giant Twitter has reinstated Project Veritas, and Veritas founder James O’Keefe is promising that a massive bombshell will be dropped on the platform next week.

O’Keefe said in the first Project Veritas video following the organization’s reinstatement on Twitter that a federal whistleblower’s has come forward with revelations about child trafficking at the U.S. border and how the government looks the other way.

“Project Veritas officially reinstated back on Twitter. 647 days after the Project Veritas Twitter account was wrongfully disabled because we filmed a lamp post outside of a Facebook executive’s house. Elon Musk getting us back on Twitter. The corrupt Twitter bird is upside down no longer, and not only are we back but we are coming back with a vengeance!” O’Keefe said.

“One week from Tuesday, we are going to launch, on the Project Veritas Twitter page exclusively, a new federal whistleblower showing how unaccompanied children at the border are being exploited by the United States government,” he added.

The Project Veritas video can be seen here:

Thank you @ElonMusk for reinstating the Project Veritas Twitter account and for standing up for real investigative journalism ⁰⁰Stay tuned for an exclusive on this account 11/29 – A brave whistleblower inside the federal government is going on the record about child trafficking pic.twitter.com/wJotKQBiKM

Big League Politics reported on how Project Veritas was banned from Twitter back in early 2021:

“Project Veritas was blocked on Twitter on Thursday after they posted a video of a confrontation between an investigative journalist and Facebook VP of Integrity Guy Rosen.

Veritas journalist Christian Hartsock approached Rosen outside of his home where he asked him about recent comments Rosen made during a Facebook internal meeting about the tech giant’s Orwellian capability to choke off content with the aim of securing certain electoral outcomes.

“We have a system that is able to freeze commenting on threads in cases where our systems are detecting that there may be a thread that has hate speech or violence…these are all things we’ve built over the past three-four years as part of our investments into the integrity space our efforts to protect the election,” Rosen said in the leaked video.

After being approached by the Veritas journalist, Rosen looked alarmed and quickly walked inside of his home.

“How do you define hate speech? Is it just speech that you hate? Are you freezing your own comments now?” Hartsock asked Rosen outside of his home. Rosen refused to respond to the questions.

“The VP of Integrity at Facebook showing how much integrity he really has,” Hartsock added to conclude the video.” 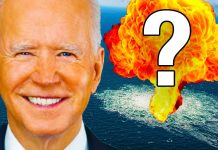 America — NOT Russia — is Europe’s enemy.