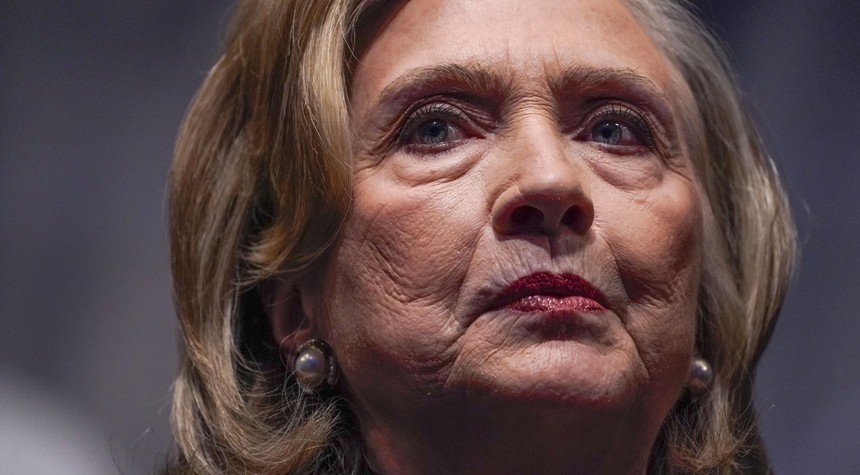 The Russian collusion hoax has been definitively discredited, but Hillary Clinton clings to it nonetheless, apparently hoping that the anti-Russian sentiment that the invasion of Ukraine has stirred up will help propel her into the White House in 2024. But the Left’s war with reality is leading Hillary, along with many other prominent Leftists, into increasing absurdities, and clinging to the Russia hoax only compounds the problem, making Hillary seem increasingly like Gloria Swanson in Sunset Boulevard, the aging onetime film star who hasn’t realized that the glory has departed and that there will be no triumphant return to the bright lights.

At a symposium of sycophants at Georgetown University on Thursday, Hillary advanced the fanciful notion that everyone’s favorite bête noire, Vladimir Putin, was rubbing his hands in glee and waiting for Donald Trump’s reelection in 2020 to implement his plan to invade Ukraine. “He got his dreams fulfilled when Trump was elected” in 2016, said Hillary for what must be the twenty-thousandth time. “He, you know, decided that he didn’t want to face me as president,” she added. “So he did all the things we now know he did that are well cataloged.” Well refuted, also.

But as if aware that we have heard that song before, Hillary was also ready with some new material, too. “And I believe that if Trump had been reelected, Putin would have waited for Trump to do what he said he was intending to do, which was to pull us out of NATO.” That would have played right into Putin’s fiendish plans, you see. Hillary continued: “And that would have created such a vacuum that invading Ukraine, which he thought was going to be easy anyway, would be a fait accompli.”

Here’s where Hillary reveals herself fully to be someone whose balloon never lands. You see, in her view, Putin knew he had a compliant puppet in Trump, one whom he himself had installed. So the wily Russian knew that Trump would pull the U.S. out of NATO, and that would give him a free hand to invade Ukraine. But instead, Old Joe Biden became president, and so the dastardly Putin was stopped in his tracks, and Ukraine was never invaded. Of course, Putin did invade Ukraine while Biden was president, so that can’t be right; perhaps Hillary means that if she had been elected in 2020, rather than Biden or Trump, Putin, scared to death of Mrs. Bill Clinton, would never have dared invade Ukraine.

Whatever Hillary may mean, the facts are undeniable: during the Obama administration, Putin moved against Ukraine, seizing Crimea. During the Trump administration, Putin did not move against Ukraine. During the Biden administration, Putin launched his all-out invasion of Ukraine. Yet Hillary Clinton would have us believe that the invasion would have been even worse if Trump had been president last February when the invasion began. Or something. Just as all the vaccinated people who get COVID-19 have assured us of how much worse it would have been if they hadn’t been multiply jabbed. (In that analogy, the Biden presidency becomes a COVID jab: ineffective for what it was supposed to do, and possibly lethal. How very fitting.)

Reality is, as always, different. On Feb. 22, Trump said that while he was president, he gave Putin an ultimatum. “If you move against Ukraine while I’m president, I will hit Moscow.” To this, Putin responded, “No way,” whereupon Trump responded, “All those beautiful golden turrets will be blown up.”

Trump’s claim was met with skepticism, but it’s worth noting that Trump’s threat to Putin was based on his personality as it had come to be publicly known. Putin couldn’t be sure that Trump, so often described as brash, impulsive, erratic, and the like, wouldn’t behave in exactly that fashion. Trump added: “The Russian invasion of Ukraine is a terrible atrocity that should never have been allowed to happen or would have never happened. I know I speak for everyone here tonight when I say we are praying for the proud people of Ukraine. They are going through hell. Make no mistake, however, that Russia would not have dared to annex one inch of territory if I was in the White House. In fact, they never did it when I was there.”