The Fed, which is trying to slow demand to tamp down on consumer price inflation, gnashes its teeth.

In many ways, this is still the most overstimulated economy ever, and it’s not wanting to come down because there is still all this cash from the Fed’s and the government’s stimulus floating around. So here is an example.

California has so much cash right now it doesn’t know what to do with it. So it’s throwing money around left and right, including directly at consumers. The state will start sending out stimulus checks, I mean inflation checks, in October for up to $1,050 per household. In total, about $10 billion are expected to be sent to consumers just in time for shopping season, and folks are going to spend this extra $10 billion.

Other states – and cities– too are flush with money, and they’re spending it in a million different ways either directly or by subsidizing one thing or another. And Congress just passed massive give-away legislation that douses corporations and consumers in all kinds of incentives, cash, rebates, and what not.

And this kind of stuff just keeps on keeping on – because states and cities are flush with pandemic cash, and cash from tax revenues, and they’re going to throw this money at their businesses and consumers. And Congress is still living in an era where money was free, and it acts like it.

This comes when the Fed is trying to slow demand by hiking interest rates to slow purchases by businesses and consumers, to take pressure off prices and allow for the raging inflation to cool. All this stimulus still going on from the other side of the equation is counteracting what the Fed is trying to accomplish. And the Fed is gnashing its teeth.

So is it any surprise that consumers spent with abandon in August, even outspent the renewed flareup of raging inflation? Nope, it’s not a surprise. 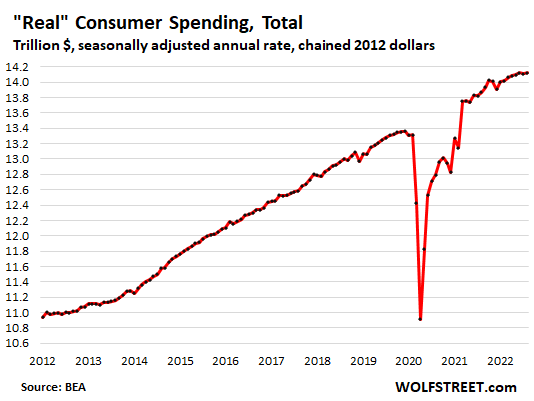 Spending on services, adjusted for inflation, ticked up 0.2% for the month, and rose by 3.0% from a year ago. Services include healthcare, housing, education, travel, sports events, haircuts, repairs, subscriptions, streaming, etc.

Services accounted for 62% of total consumer spending in August, the highest since pre-pandemic times, but was still below the share of around 64% during normal times as spending on services still runs below pre-pandemic trend; but spending on durable goods, as we’ll see in a moment, still hasn’t come off the stimulus bubble. 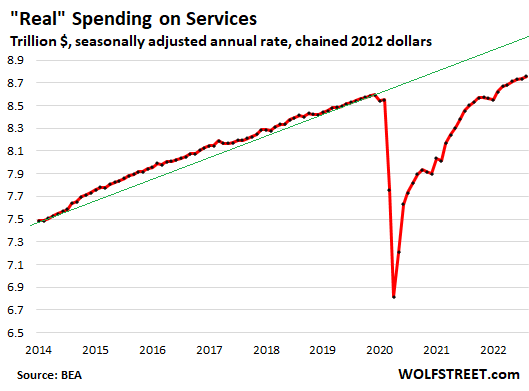 Spending on durable goods, adjusted for inflation, continues to run substantially above pre-pandemic trend. This is where the most overstimulated economy ever manifested itself in an explosion of spending in 2020 and 2021, that is now slowly and reluctantly reverting to trend.

Inflation-adjusted spending on vehicles, appliances, electronics, furniture, and other durable goods fell by 0.4% in August, but it didn’t even undo the jump in the prior month. Compared to the stimulus-driven durable-goods spending last year, August was up by 2.9%. Compared to August 2019, spending (adjusted for inflation) was up by a still astounding 25%!