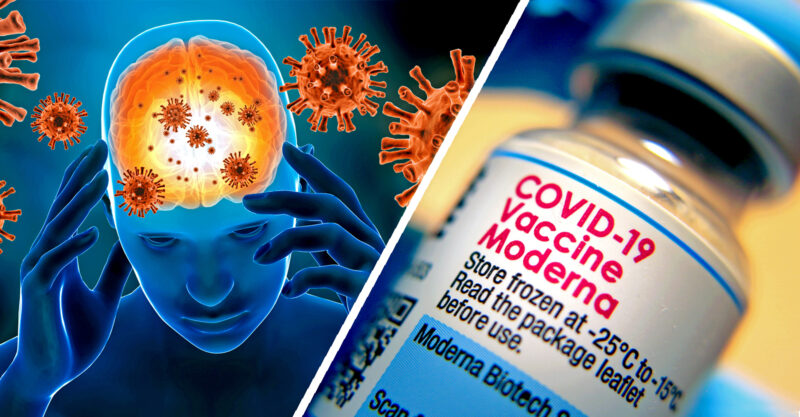 A healthy 35-year-old woman who experienced a seizure two days after her second dose of Moderna’s COVID-19 vaccine was diagnosed with limbic encephalitis, a rare form of brain inflammation, which the authors of a case report said was caused by the vaccine.

A healthy 35-year-old woman who experienced a seizure two days after her second dose of Moderna’s COVID-19 vaccine was diagnosed with limbic encephalitis, a rare form of brain inflammation.

The authors of a recent case study on the patient stated:

“We believe that this episode of limbic encephalitis, which occurred quickly after COVID-19 vaccination, is an uncommon side effect of the [Moderna] vaccine.”

Limbic encephalitis is an acute condition of noninfectious inflammation of the brain that affects the limbic system.

The limbic system is a group of structures involved in processing emotion and memory. It includes the hippocampus, medial temporal lobe, cingulate cortex and frontonasal cortex.

The symptoms of limbic encephalitis include amnesia (memory loss), behavioral changes, psychiatric symptoms, seizures and a disturbed level of consciousness.

The pathophysiology (functional changes that accompany a particular syndrome or disease) of limbic encephalitis is known to be mediated (indirectly caused) by an antigen that stimulates an antibody-mediated host immune response that inadvertently targets cells in the limbic area.

There are two causes of limbic encephalitis: paraneoplastic and autoimmune.

The patient was screened for tumors, and cancer was ruled out as the cause in this patient’s case.

According to the case report, when the woman arrived at the hospital she had a fever, followed by generalized tonic-clonic seizures (formerly known as grand mal seizures) that lasted for approximately five minutes and a postictal (post-seizure) phase of confusion that lasted approximately 30 minutes.

During her stay in the emergency department, she had two more generalized seizures, which were controlled with medication, each one lasting less than two minutes after intervention.

The patient, who did not have any other neurological symptoms and was stable, was admitted to the hospital.

The authors wrote, “Apart from looking tired, she was oriented to time, place and person. Her neck was supported, and she had full power and sensation with normal higher functions. Cranial nerves were intact.”

The patient had a full basic blood workup, which was normal. Her COVID-19 PCR test was negative. There was nothing unusual about her contrast MRI, performed upon her admission.

A lumbar puncture was performed, and her cerebrospinal fluid did have significant lymphocytosis — an abnormal increase in the number of lymphocytes (white blood cells), usually resulting from infection or inflammation.

During her hospital stay, the woman developed anisocoria, a condition in which the pupil of one eye differs in size from the pupil of the other eye. An urgent CT scan of the head showed possible temporal lobe hypodensities (darker areas on the CT scan).

After discussion with the radiologist, the patient agreed to repeat the head MRI, which this time showed features suggestive of limbic encephalitis. A subsequent electroencephalogram showed severe post-seizure encephalitic changes.