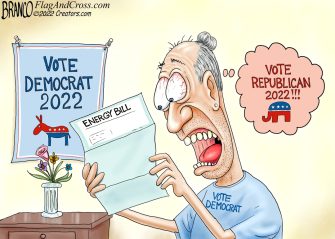 President Trump is openly warning about the possibility of nuclear war with Russia over Ukraine.  Trump has offered to negotiate a peace deal, but no one is taking him up on his offer.  Instead, the U.S. Congress has approved a fresh $12 billion to keep it all going.  There are zero peace talks going on now, and Biden and NATO do not want them.  They want war, and it’s only a matter of time with the latest blowing up of the Nord Stream Pipelines that carry natural gas  from Russia to Germany.

Hurricane Ian has landed in Southwest Florida, and it has caused severe damage.  Governor Ron DeSantis said it brought a 500-year flood to some parts of the Sunshine State.  Estimates are up to $40 billion in damages that were caused by the hurricane.  The mayor of Fort Myers Beach says the city is 90% gone, and there is nothing to come home to.

The vax keeps killing and maiming people, and they keep injecting this bioweapon into unsuspecting people.  The latest death was a one-month only baby that needed a routine blood infusion and got vaxed blood.  It killed the child, according to his mother.  Now, we find out the American Red Cross is not separating vaxed blood from unvaxed blood.  Could this be as deadly and damaging as the injections?  To the mother of the one-month old given vaxed blood, the answer is sadly, yes.  The vax is still finding a way to kill even if it is not injected.