Siegel appeared on CNBC yesterday and scolded Powell to “offer the American people an apology” for his poor monetary policy over the years. In a Tweet, Summers effectively told the Fed Chairman to shut up, lecturing him on not talking so much at his press conferences. (See Tweets below.)

In his CNBC interview, Siegel cited “home prices declining, commodity prices declining, freight rates declining,” as examples of easing inflationary pressures that warrant the Fed taking a less aggressive stance on raising rates. He also cited the sharp rise in the U.S. dollar, saying “the dollar is showing how tight the Fed actually is.”

Summers has taken to his Twitter page to troll Powell on an ongoing basis to get tougher on inflation. Summers also gave an interview to Fortune’s Shawn Tully which was published last Friday. Summers told Tully that “If we’re going to bring down inflation, you likely need a policy more restrictive than the policy that’s contemplated by the markets or the Fed.”

According to the Fortune article, Summers never bought into Powell’s premise that inflation would be “transitory” because of bottlenecks in the supply chain. Summers’ view is that consumers have too much money chasing too few goods. Based on that premise, Summers wants to see the Fed tighten until consumer demand falls sharply. 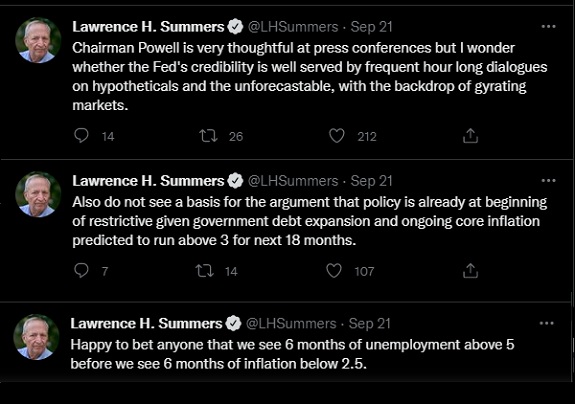 During Powell’s press conference last week, following the announcement that the Fed had raised its benchmark rate by 75 basis points for the third time in a row this year (following a 25-basis point hike in March and a 50-basis point increase in May) Powell was asked a question on trade-offs by Bloomberg correspondent Michael McKee. The exchange went as follows:

McKee: Thank you, Mr. Chairman. In a world of euphemisms that we live in here, with below trend growth and modest increase in unemployment, I’m wondering if I can ask you a couple of direct questions for the American people. Do the odds now favor, given where you are and where you’re going with interest rates, favor a recession? 4.4 percent unemployment is about 1.3 million jobs. Is that acceptable job loss? And then, given that the data you look at is backward looking, and the lags in your policy are forward looking and you don’t know what they are, how will you know, or will you know, if you’ve gone too far?

Powell: So, I don’t know what the odds are. I think that there’s a very high likelihood that we’ll have a period of what I’ve mentioned is below trend growth, by which I mean much lower growth. And we’re seeing that now. So the median forecast now I think this year among my colleagues and me, was 0.2 percent growth. So that’s very slow growth. And then below trend next year. I think the median was 1.2, also well below so that’s a slower, that’s a very slow level of growth and it could give rise to increases in unemployment but I think that’s, so that is something that we think we need to have and we think we need to have softer labor market conditions as well. We’re never going to say there are too many people working, but the real point is this, inflation, what we hear from people when we meet with them, is that they really are suffering from inflation. And if we want to set ourselves up, really light the way to another period of a very strong labor market, we have got to get inflation behind us. I wish there were a painless way to do that, there isn’t. So, what we need to do is get rates up to the point where we’re putting meaningful downward pressure on inflation, and that’s what we’re doing….”