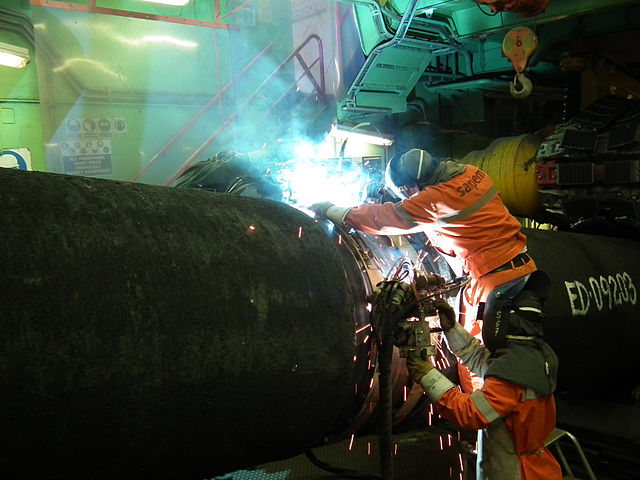 Nord Stream AG, the operator of the Nord Stream 1 undersea gas pipeline from Russia to Germany, said Monday it was looking into causes of a drop in pressure in the pipeline.

“Tonight, dispatchers from the Nord Stream 1 control centre recorded a pressure drop on both branches of the gas pipeline,” it said in a statement. “The reasons are being clarified.”

The odds this was the result of a deliberate attack are going through the roof.

Authorities in Germany are trying to establish what caused a sudden drop in pressure in the defunct Nord Stream 2 gas pipeline, with a spokesperson for its operator saying it could have been a leak.

The pipeline has been one of the flashpoints in an escalating energy war between Europe and Moscow since Russia’s invasion of Ukraine in February that has pummelled western economies and sent gas prices soaring.

The Russian-owned pipeline, which was intended to double the volume of gas flowing from Vyborg, Russia, under the Baltic Sea to Germany, had just been completed and filled with 300m cubic metres of gas when the German chancellor, Olaf Scholz, cancelled it shortly before Russia invaded Ukraine.

European countries have resisted Russian calls to allow Nord Stream 2 to operate and accused Moscow of using energy as a weapon. Russia denies doing so and blames the west for gas shortages.

Russian state media is only reporting an “incident” occurred and a “security zone” is being set up around the perimeter.

From Sputnik, “Security Zone Established in Danish Waters Due to Emergency at Nord Stream 2, Operator Says”:

Monday’s incident on the Nord Stream 2 natural gas pipeline occurred in the Danish waters near the island of Bornholm, with a five-nautical-mile security zone being established at the scene after the emergency, the gas pipeline operator, Nord Stream 2 AG, told Sputnik.

“In cooperation with coastal services, it has been discovered that the incident occurred in the Danish EEZ [exclusive economic zone] southeast of Bornholm. Coastal services have established a security zone with radius of five nautical miles,” the operator said.

There is tremendous pressure on Germany and the EU to fire up Nord Stream 2 with energy prices soaring.