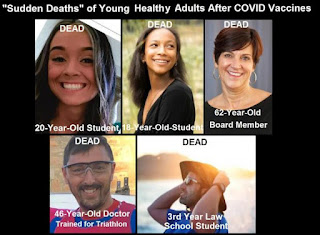 The frolics of summer are done, the day shortens, the sky darkens, the suspense deepens….

Labor Day is in the rearview mirror and the long, sickening slide into we-know-not-what (but it can’t-be-good) commences! Well, there are a few things we know, but only in the shaggy outlines because the folks who are supposed to inform us — the news media, the public health gang — like to keep the real action behind a scrim of unicorns cavorting through a rainbow-lit candyland. Of course, we are not all the idiots they want us to be.

Here’s one thing we sort of know: you-all vaxx-happy Wokesters are about to have a new BA-5 bivalent booster laid on you. The Darwin Award season has been extended at least another six months! You’ll be glad to hear it’s been tested in a trial involving eight lab mice, and quickly approved by our FDA. The bad news is that all eight mice got Covid. The worse news is that the booster was wildly inconsistent in producing antibodies among the eight identical mice, meaning the ultimate effect on their immune systems is a crap-shoot — but, hey, they’re only mice.

Thus, some more good news: humans were so far spared any testing for this new miracle treatment. Pfizer and Moderna didn’t hurt anyone in any cobb-job trials, like they did the first time around (hiding the results). The not-so-good news is: nobody, especially no one in the FDA, has any idea what effect the new booster will have on humans. The best news is that our beneficent government will only make the new vax available to people who are already vaxxed. You have to be “eligible,” in the club, so to speak. Aren’t you special! I never joined that club, so it works for me.

I’d suppose, though, that a lot of people who originally joined the vaxx club will demur from pharma’s latest offering. Actually, most of them. Perhaps they’ve heard that each shot drains more mojo from your immune system. Perhaps they’ve heard about friends and relatives who developed sudden vicious cancers, neurological difficulties, vascular disasters, or lingering, unshakable Covid symptoms. Suppression of news has been epic, of course, but surely you’re aware that Justin Bieber lost the use of half his face six months ago. No world tour for Justin. 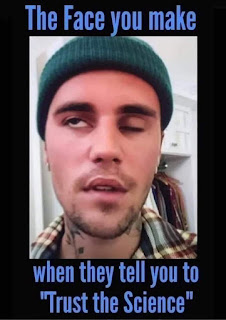 Another thing we know (this one for certain): a new leading cause of death throughout Western Civ in people under 60 is “Cause Unknown.” At least that’s the official designation because the officials running public health and the medical establishment don’t want to know what’s killing people. Or, more precisely, they don’t want you to know, so they pretend not to know.

If they suddenly felt the itch of curiosity, they might discover that the mRNA shots were behind the spread of Sudden Adult Death Syndrome (SADS) — the interchangeable and equally ambiguous tag for this mystifying phenomenon. That might suggest to a Nancy Drew level medical sleuth that mRNA vaccines are not good for you, not “safe and effective,” that is, meaning that the entire two-plus-years of vaxxing up roughly 260,000,000 Americans has been a fraud, which would vacate Moderna’s and Pfizer’s liability shield for these products. Cue, every lawyer born after 1940.

Another thing we know for sure now is that people who are vaccinated are far more likely to catch Covid and also more likely to be hospitalized for it. One in fourteen Brits are currently infected with it, mainly the vaxxed-and-boosted. The media propaganda is full of people bragging that their bout of Covid, or several bouts of Covid — from which they were supposedly immune — “could have been much worse.” Actually, for many of the vaccinated, it is much worse. They don’t hear about it because the news media won’t tell them, and the news media executives do what their commissars in government and pharma tell them to do. “Jump!” (“How high?”)

A federal judge this week ordered the White House, Anthony Fauci, Secretaries Becerra and Mayorkas, and a slew of other US officials to surrender their email correspondence with social and news media companies in the matter of government working to suppress the first amendment and, in the censoring, de-platforming, and defaming of many individual citizens who attempted to present views of the Covid melodrama contrary to the official narratives. This was in a suit brought by state Attorneys General Eric Schmidt (MO) and Jeff Landry (LA). From it, a million more lawsuits for personal injury may bloom. Mark Zuckerberg let the cat out of the bag days ago as to how the FBI leaned right on him.

Prepare for an avalanche of unwelcome news evading the censors as we slide out of summer into the cold-and-flu season, as it’s called. Hundreds of millions throughout the highly-vaxxed nations will be walking around with crippled immune systems. The life insurance companies may require a bail-out, from all those “unknown causes” that killed people. But so will every other institution in Western Civ.