The corrupt political backdrop for today’s unprecedented market quagmire feels like a hyperbolic trailer for a low-budget sci-fi thriller: The former president of the only remaining superpower in the world has been charged with “staggering” frauds against banks – the ones he just deregulated as president. (This same former president was also caught red-handed with Top Secret documents after he left public office — but the super power’s 18 intelligence agencies have no idea what he did, or was planning to do, with these documents.)

On the other side of the globe, the sitting president of a bygone superpower is engaging in nuclear saber-rattling and conscripting 60-year-old men to fight an illegal war while young, able-bodied men flee the country en masse.

The world’s financial markets have gone off the rails in an equally disorienting fashion. The central bankers that had created bubbles in almost every asset class by keeping interest rates at zero for years, are now in competition for how fast they can raise interest rates in order to keep their currencies from collapsing and causing further crippling inflation. The dramatic spike in interest rates around the globe is causing prices to collapse in everything from stocks, bonds, commodities, and risk assets. There is nowhere for investors to hide.

How about hiding out in short-term U.S. Treasury securities? Isn’t that always a safe haven? Not this time. Consider the share price of the Vanguard Short-Term Treasury Exchange Traded Fund (ETF). It sported a $61 share price last December. It closed at $57.79 on Friday. That’s because the Fed has promised to continue the pain (hiking short-term interest rates, which causes losses in existing debt instruments with lower fixed rates) until it gets inflation under control.

The yield on the two-year U.S. Treasury note is the highest in 15 years, closing Friday with a yield of 4.21 percent. 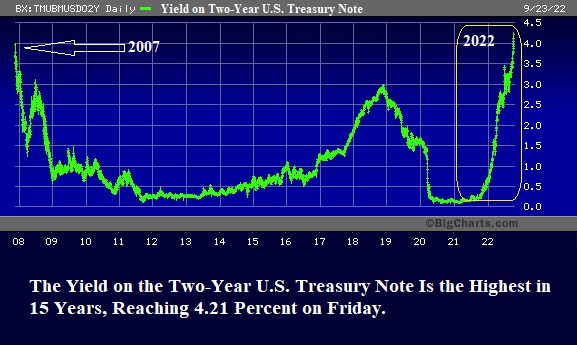 On Wednesday, the Fed raised its Fed Funds rate to 3 – 3.25 percent, hiking by ¾ point (75 basis points) for the third consecutive time this year (in June, July and September). Those hikes followed a ¼ point rate increase in March and a ½ point increase in May. The Fed’s actions effectively tripled short term interest rates in a span of six months – the most aggressive interest rate moves by the Fed in more than four decades.

In addition, according to the projections released by the Fed last Wednesday, it is planning to raise its Fed Funds interest rate (short-term overnight borrowing rate) to as much as 4.6 percent by next year. That would mean that it expects to hike rates by an additional 1.35 percent into next year.

At the end of August, Bespoke Investment Group released a study that found that the combined losses in stocks and bonds for investors was the worst in 50 years, because Wall Street financial advisors typically recommend a portfolio that is 60 percent stocks and 40 percent bonds. Both asset classes are not supposed to suffer sharp losses at the same time; one asset class is supposed to be a hedge against the other.

The 60-40 retiree portfolio is not the only portfolio feeling the pain. Hedge funds, trading houses, asset managers and Wall Street mega banks were not positioned for this type of aggressive monetary action by the Fed. Markets are starting to see large liquidations to stave off more pain.

The share prices of two Wall Street mega banks, that rank number one and number two in terms of the largest derivative exposure, are tanking. Year-over-year, JPMorgan Chase has lost 32 percent of its market value while Citigroup has lost 38 percent. (See chart below.) 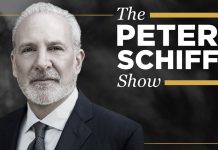