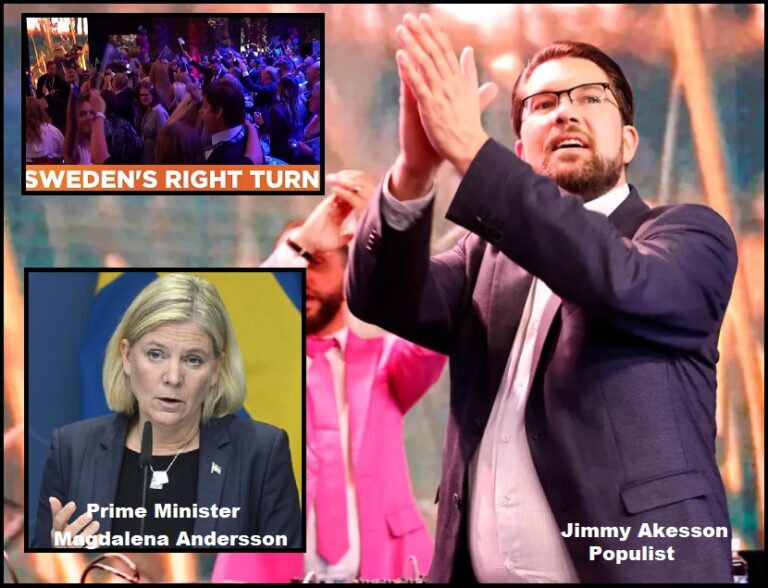 Within the politics of Sweden, the ‘Sweden Democrat‘ party is the equivalent of MAGA Republicans. As a result, the European media call them “far-right.”

As the results of last weekend’s election are finally tabulated, the anti-globalist parties in Sweden have surged to victory.  With all of the consequences from globalist policies creating havoc in the country, the political dynamic in Sweden has now flipped.

Do not let this election outcome slip your geopolitical reference point.  Current Swedish Prime Minister Magdalena Andersson has lost the majority coalition. She has resigned.  European leftists are shocked and big mad.

(Dutsche Welle) – Sweden’s right-wing opposition appears to have won in a razor-thin electoral race. The big winner of the elections are the far-right Sweden Democrats, who could become part of government for the first time.Sweden’s right-wing opposition appears to have won a thin majority in the country’s parliament with nearly all votes counted.

Swedish Prime Minister Magdalena Andersson said that she would resign and that preliminary results were clear enough to draw conclusions. She said that it was important that Sweden gets a new government as soon as possible.

The results were too close to call before postal and overseas votes had been included into the count. So far, the Moderates, Sweden Democrats, Christian Democrats and Liberals hold a two-seat lead over the governing Social Democrats.

Some 99% of votes from all 6,578 voting districts had been counted by late on Wednesday. If results were confirmed, the right-wing opposition would win 176 seats in the 349-seat parliament.

As the current count shows, just 47,000 votes separate the left- and right-wing blocs from each other.

The governing Social Democrats and its coalition would win 173 seats in this instance, the tallies showed.

Never before have the Sweden Democrats, a party who relies on anti-immigration and nationalist rhetoric, been part of a government.  The party has so far won more than 20 percent of ballots, becoming the second-biggest party behind outgoing Prime Minister Magdalena Andersson’s Social Democrats, which have dominated Swedish politics since the 1930s. (more)