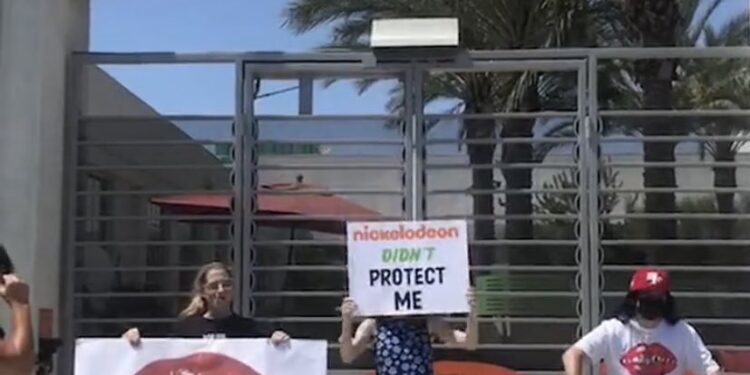 A former child star protested the Hollywood perverts and abuse she and other kids were subjected to while filming TV shows for Nickelodeon in a demonstration she organized outside of the network’s California studios.

Former “Zoey 101” cast member Alexa Nikolas led the demonstration and organized it under her group called “Eat Predators,” lining the sidewalks outside of Nickelodeon’s Burbank, California studios with signs and demonstrators drawing attention to the sick underbelly of the kid’s entertainment channel.

Holding signs asking questions like “How Many NDAs?” and with phrases like “Nickelodeon Failed to Protect Me,” the Eat Predators demonstration drew attention to the rampant child abuse and culture of silence and intimidation that has persisted within the children’s network, apparently for decades.

Nikolas appeared as “Nicole” on Nickelodeon’s “Zoey 101” tv show from 2005 to 2008. The show starred Jamie Lynn Spears, the younger sister of Britney Spears, and dramatized the trials and tribulations of youngsters at a trendy fictional boarding school.

“Zoey 101” and a number of other hit shows of its day were created by notorious Nickelodeon writer and producer Dan Schneider, who has been accused of misconduct, creepiness, and outright pedophilia by a number of former child stars and is said to have a particular fixation on children’s feet, shots of which he regularly included in his television programs.

For years, one of the TV channel’s most recognizable symbols was a gigantic orange footprint with the name Nickelodeon written across it.

Nickelodeon officially cut ties with Schneider in 2018 after allegations made against him started to surface online, despite their best efforts to stifle his underaged accusers with legal documents and cash.

In a memoir recently released by one of Alexa Nikolas’s former Zoey 101 co-stars, Jenette McCurdy, it is detailed that a man named only as “the creator” but widely accepted as being Dan Schneider gave McCurdy alcohol at a young age before pressuring her to accept a “massage” from him. Nickelodeon paid the young girl $300,000 to keep quiet, McCurdy discloses, hence not mentioning the actual name of “the creator” in her memoir.

Watch Video Footage of the “Eat Predators” Demonstration Outside Nickelodeon Headquarters Below: