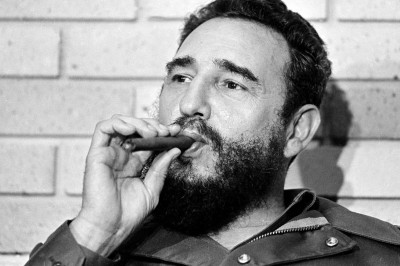 Fidel Castro’s secret service chief once estimated that 634 attempts were made against the Cuban leader’s life.

The presence of a revolutionary government in Cuba, just 90 miles off the coast of Florida, was intolerable for the US government.

What is less well known is that Britain collaborated with Washington’s anti-Castro operations in the early 1960s.

A Foreign Office document, classified for six decades and only recently released at the National Archives, reveals British diplomats discussed the “disappearance” of Castro with the CIA.

In November 1961, Thomas Brimelow, a high-flying British diplomat in Washington, went with his colleague Alan Clark to meet the CIA.

Clark, who was visiting America from his post at the British embassy in Havana, offered US intelligence a window into Cuba – a country the state department had pulled out from.

After opening statements, the CIA men cut to the chase, asking Clark “whether the disappearance of Fidel Castro himself would have serious repercussions” in Cuba.

Brimelow’s minutes of that meeting, marked “secret and personal”, show the British duo did not protest the unsubtle allusion to Castro’s assassination.

Clark responded that “Raoul Castro had been nominated as Fidel’s successor”, and “he might succeed in taking Fidel’s place if adequate time were allowed”.

“If Fidel were to be assassinated, then it was less certain that there would be a smooth takeover. The [state] apparatus, which was apparently strong enough to cope with a gradual changeover, might not cope with a sudden crisis”.

The revelations raise fresh questions about how much Britain knew of Washington’s secret efforts to topple Castro.

The subversive discussion came months after the White House had cut off diplomatic relations with Havana and attempted a failed invasion at Cuba’s Bay of Pigs.

The following year, Clark became first secretary at the British embassy in Washington. Brimelow ultimately went on to run the Foreign Office and receive a life peerage.

While the UK was generally sympathetic to the White House’s goal of removing Castro, British officials were more critical of US strategy – most pointedly during the botched Bay of Pigs invasion.

Diplomatic relations between the US and Britain also soured over the issue of sanctioning Cuba throughout 1962.

Clark was not exclusively dismissive of the Castro government. At the CIA meeting, he argued that

“the revolution had brought some appreciable good to a large number of people”, adding that “the people who had thus benefited did not yet realise the price that they were paying and would have to pay”.

Nonetheless, declassified files show that the British embassy in Havana continued to share intelligence with Washington on the military, political and economic situation in Cuba.

In January 1962, Britain sent a report to the Pentagon on a military parade in Havana, replete with sketches of Cuba’s military apparatus.

It was “largely based on our own direct observations; we had the Ambassador and Head of Chancery on the stands, three members of the staff in the crowds lining the route and two more watching the proceeding on television”, one British cable noted.

The Americans were appreciative. “This is just to say how very grateful the Pentagon are for the excellent reports… about the military parade. They are most impressed by the effort put into it and the detailed results you all obtained”, another telegram shows.

In March 1962, the Pentagon insisted once again “how grateful they are for all the previous information on the military situation in Cuba”.

Months later, the US outlined “priority targets” for Britain in its gathering of military information in Cuba.