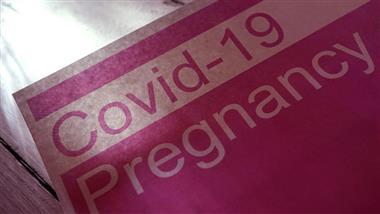 Since the rollout of the experimental COVID shots, U.S. health officials have adamantly claimed the shots are safe for pregnant women, and have been urging all pregnant women to get the jab “to protect themselves and their babies.” To this day, the U.S. Centers for Disease Control and Prevention recommends the COVID shot for:1

“… people who are pregnant, breastfeeding, trying to get pregnant now, or might become pregnant in the future.”

“People who are pregnant should stay up to date with their COVID-19 vaccines, including getting a COVID-19 booster when it’s time to get one.”

“Evidence continues to build showing that:

All the while, they’ve had Pfizer data showing the shots cause shocking rates of miscarriage which, adding insult to injury, have been blatantly miscategorized as a “recovered/resolved” adverse effect.4 Who in their right mind would consider DEATH a resolved side effect unless they had a depopulation agenda in mind all along?

I don’t see how this could be described as anything but a criminal cover-up. The only reason we know any of this is because U.S. District Judge Mark Pittman ordered the U.S. Food and Drug Administration to release Pfizer documents at a rate of 55,000 pages per month. The FDA and Pfizer had asked to release the documents at a pace of 500 pages per month, which meant it would take 75 years to disclose them all.5

Dr. Naomi Wolf recently reported that an analysis of Pfizer data revealed 44% of the women in the trial suffered miscarriages.6 That statistic turns out to have been the result of a miscalculation,7 as Pfizer listed the miscarriages in two separate columns, resulting in them being counted twice.

We’ve repeatedly found Pfizer’s data collection and reporting to be all over the place, and seemingly on purpose, to make hazards more difficult to ascertain. Wolf admitted the error and took down the original report. However, while fact checkers are gloating over the perceived victory, there’s plenty of other evidence in the Pfizer material to demonstrate these shots should be banned for all time.

“… let’s do a dive on just one page of the many thousands. See below, Section 5.3.6, Page 12 of the document called ‘Cumulative Analysis of Post-Authorization Adverse Event Reports.’ 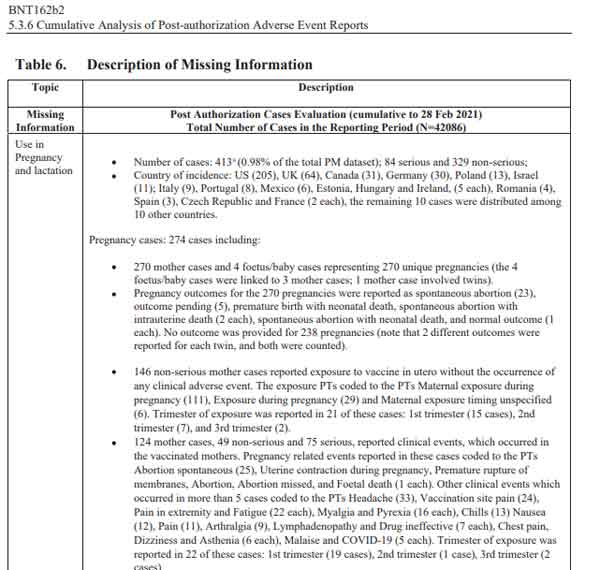 Looking at the first bullet under the header: Pregnancy cases: 274 cases including:

In this paragraph, at first read, it is just a list of adverse events and numbers, detailed in a way that is confusing at best, and obfuscating at worst. I think it is the latter because, if you do some simple arithmetic trying to parse that paragraph, you end up with this:

270 pregnancies were reported in vaccinated women during the first 12 weeks of the vaccine campaign. In 238 of them, ‘no outcome was provided.’ So, they only knew the outcome of 32 pregnancies reported. What happened in those 32 pregnancies they followed up on?

My hands are literally trembling as I write this, but here goes. In these 32 pregnancies, there were:

◦So, 25 of the 32 pregnancies with known outcomes resulted in a miscarriage, a rate of 78%. Note that miscarriage normally occurs in only 12-15% of pregnancies

Note that this only adds up to 29 known outcomes, but then they note that ‘two different outcomes were reported for each twin’ and then they talk about ‘fetus/baby cases as separate from mother cases.’ I have no idea how to interpret this explanation of outcomes, so it may have been one or two less (or more) deaths then.

So, of the 32 pregnancies they knew the outcome of, 87.5% resulted in the death of the fetus or neonate. Burying this data in the way and not alerting the world to what they found, is criminal activity …”

To be perfectly clear, the failure to record and report the outcomes of 238 out of 274 pregnancies during a drug trial is simply unheard of. It’s shockingly unethical. And the fact that both the Food and Drug Administration and the CDC accepted this, and claim there’s “no evidence” of harm to pregnant women and their babies is proof positive of reprehensible maleficence.

There’s no fixing what’s gone wrong at the FDA and CDC. Their credibility with the public is ruined beyond any possible recovery. The CDC can review and reorganize itself all it wants, but it changes nothing. They are, to this day, urging pregnant women to take a shot that they KNOW will cause babies to die. Calling it a dystopia of epic proportions is a profoundly serious understatement.

Need more evidence? How about the fact that the CDC-sponsored study9 published in The New England Journal of Medicine (NEJM) in April 2021 — which was widely used to support the U.S. recommendation for pregnant women to get injected — also obfuscated data to hide a shockingly elevated miscarriage rate.

According to this paper, the miscarriage rate within the first 20 weeks of pregnancy was 12.5%, which is only slightly above the normal average of 10%. (Looking at statistical data, the risk of miscarriage drops from an overall, average risk rate of 21.3% for the duration of the pregnancy as a whole, to just 5% between Weeks 6 and 7, all the way down to 1% between Weeks 14 and 20.10)

However, there’s a distinct problem with this calculation, as highlighted by Drs. Ira Bernstein, Sanja Jovanovic and Deann McLeod, HBSc, of Toronto. In a May 28, 2021, letter to the editor, they pointed out that:11

“In table 4, the authors report a rate of spontaneous abortions <20 weeks (SA) of 12.5% (104 abortions/827 completed pregnancies). However, this rate should be based on the number of women who were at risk of an SA due to vaccine receipt and should exclude the 700 women who were vaccinated in their third-trimester (104/127 = 82%).”

In other words, when you exclude women who got the shot in their third trimester (since the third trimester is after week 20 and therefore should not be counted when determining miscarriage rate among those injected before week 20), the miscarriage rate is 82%. (The errors in that NEJM article were also reviewed in a Science, Public Health Policy and the Law paper12 published in November 2021.)

Of those 104 miscarriages, 96 of them occurred before 13 weeks of gestation, which strongly suggests that getting a COVID shot during the first trimester is an absolute recipe for disaster. So, here was yet another attempt to hide the fact that more than 8 in 10 pregnancies may be terminated as a result of the jab.