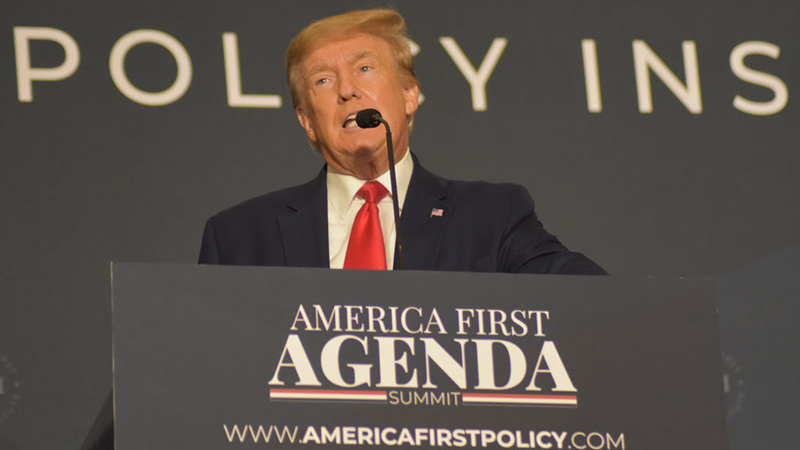 President Trump spent a portion of his speech this week at the America First Agenda Summit calling for a crack down on sexualization of children in schools and society at large.

“Federal, state, and local governments should aggressively enforce existing statutes to stop the perverted sexualization of minor children,” Trump told the crowd, adding “You have the statues.”

“This is a hallmark of cultural and social decay against which we should fight back very hard and very soon,” Trump asserted, further warning that “We don’t have time to wait years to do this.”

He continued, blasting “The sickos who are pushing sexual content in kindergartens, or providing puberty-blockers to young children.”

“They’re not just engaged in acts of depravity. In many cases, they are breaking the law and they should be held fully accountable,” Trump urged.

Trump then turned to the issue of transgenders competing in sports.

“We should not allow men to play in women’s sports. It’s so disrespectful to women. So Crazy,” Trump stated.

He later quipped that he would be “the greatest women’s basketball coach in history” if he could convince LeBron James to be on his team.

“I’d go up to LeBron James… I’d say, ‘LeBron, did you ever have any desire to be a woman?’ Because what I’d love you to do is star on my team that I’m building.”

“I will have the greatest team in history, they’ll never lose. Nobody will come within 70 points of this team,” Trump joked.