Forbearance and pandemic cash run out. But a lot of fun was had by all.

Mortgage balances jumped by 9% in Q2 from a year ago, as prices spiked year-over-year, while people bought far fewer homes – sales of existing homes dropped by 10% from Q2 last year, and sales of new single-family houses plunged by 19% over the same period. 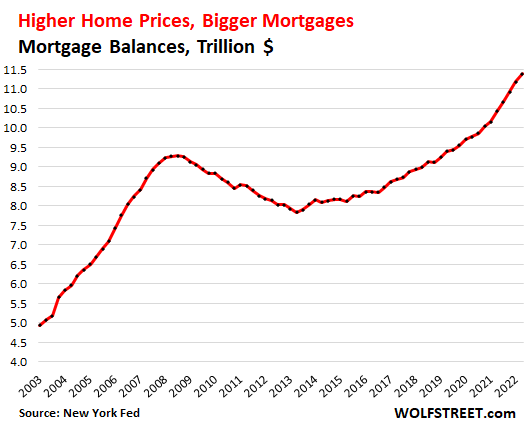 Home Equity Lines of Credit fell out of favor after 2009 and balances declined steadily, unwinding the massive surge of the years before the Financial Crisis. As the Fed’s interest-rate repression and QE pushed down mortgage rates, and as home prices rose, folks began to cash-out-refinance their mortgages to generate cash, rather than drawing on HELOCs.

But now the decline has ended. HELOC balances ticked up in Q2 to $319 billion, from the low in the prior quarter. This has occurred as mortgage rates have spiked, and as cash-out refis have plunged.

There is now a new dynamic in place: Much higher mortgage rates: It would be stupid to refinance a 3% mortgage with a 5% mortgage in order to draw $100,000 in cash out of the home. It’s better to leave the 3% mortgage alone, and get a $100,000 HELOC that charges 5% on the outstanding balance, if any. So I expect HELOC balances to rise further going forward because the cash-out refi game has changed. 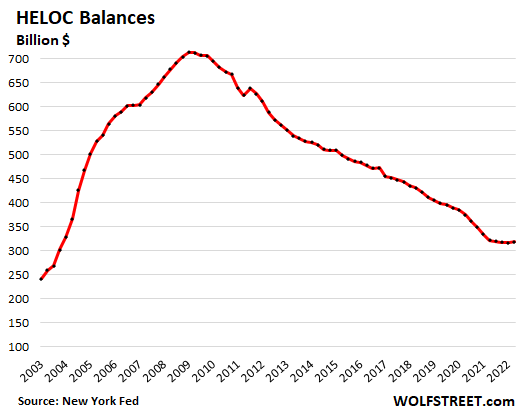 Mortgages are by far the biggest part of consumer debt, bigger than ever.

Nothing comes even close. Consumer debt balances in Q2:

Mortgages is where the big systemic risks used to be due to the sheer size of the market and the high leverage.

But most mortgages are now securitized into mortgage-backed securities. MBS fall into two categories:

Delinquencies start trip back to reality. A lot of fun was had by all.

The spike in home prices since spring 2020 allowed homeowners, when it came time to exit the forbearance program, to either sell the home and pay off the mortgage and walk away with extra cash; or work out a deal with the lender, such as a modified mortgage with a longer term, a lower rate, and lower payments. And a lot of fun was had by all.

But with forbearance programs over, mortgage delinquencies started to rise this year from the record lows last year.

Mortgage balances that were 30 days or more delinquent rose to 1.9% of total mortgage balances in Q2, up from 1.7% in Q1. It was the third quarter-to-quarter increase in a row, from the record low in Q2 2021. But it remains below all pre-pandemic low points (red line).