The price of silver hit a peak over $26.50 on March 8. It spent about a month and a half breaking down, and then the bottom fell out. It’s currently down from that peak almost 8 bucks.

However, the opposite has been happening to silver’s scarcity. First, let’s look at a chart of the silver market price and the silver fundamental price. 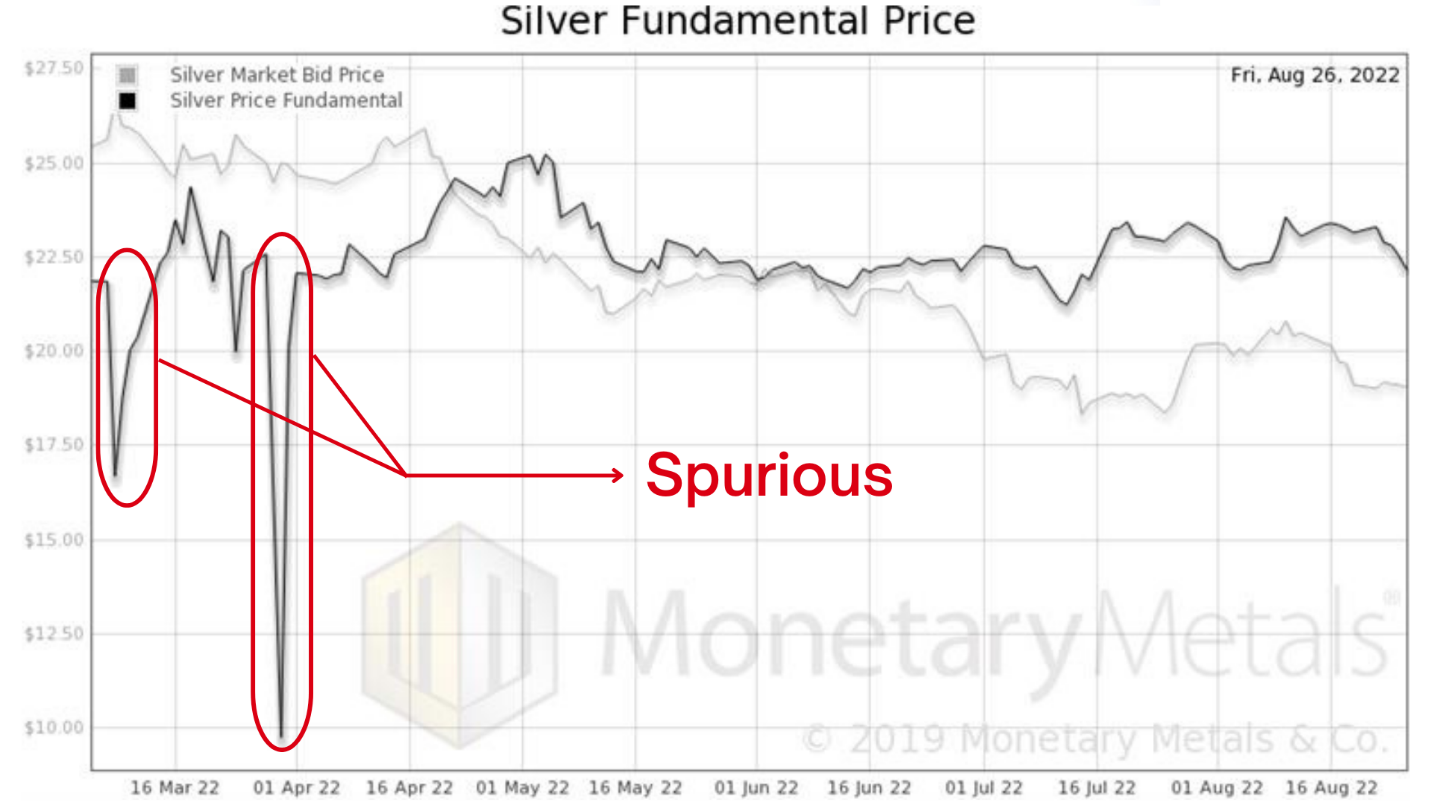 The market price is down a lot since that peak, but the fundamental price has moved sideways (ignoring the two spurious drops) and is now the same as on March 8.

Now let’s look at what the silver basis and silver cobasis are showing. 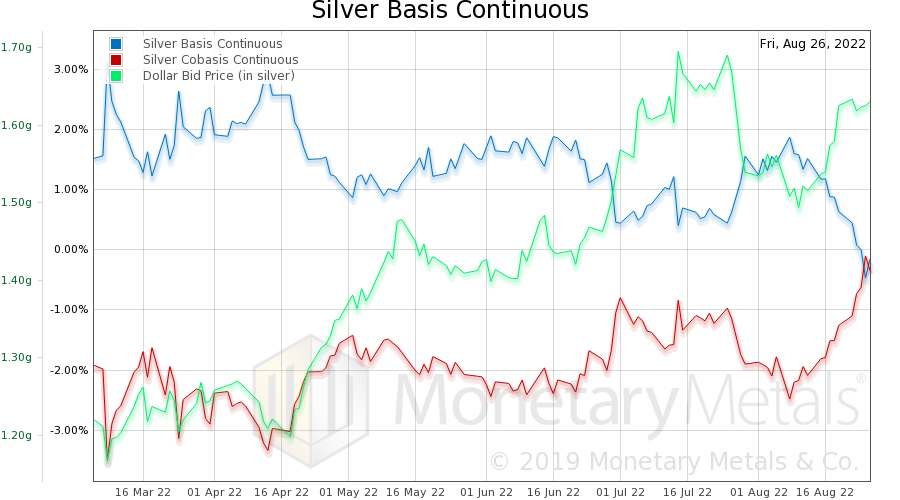 There has been a big run up in the cobasis (i.e. the measure of scarcity), since August 8. It has hit almost zero, which is the line of demarcation of backwardation.

This chart, by the way, shows the continuous basis and cobasis. This is not the near contract (i.e. December, which hit a cobasis near 1% on Thursday). The continuous basis is a smooth 6-month average duration synthetic contract, not subject to the volatility caused by contract expiry, which often manifests as temporary backwardation.

Our remarks? We haven’t seen a cobasis like this, in at least 7 years.

But it’s bigger than that. Much bigger. That’s because the interest rate is higher now, than it has been since November 2008. Now, LIBOR is on a tear. Then, it was collapsing. 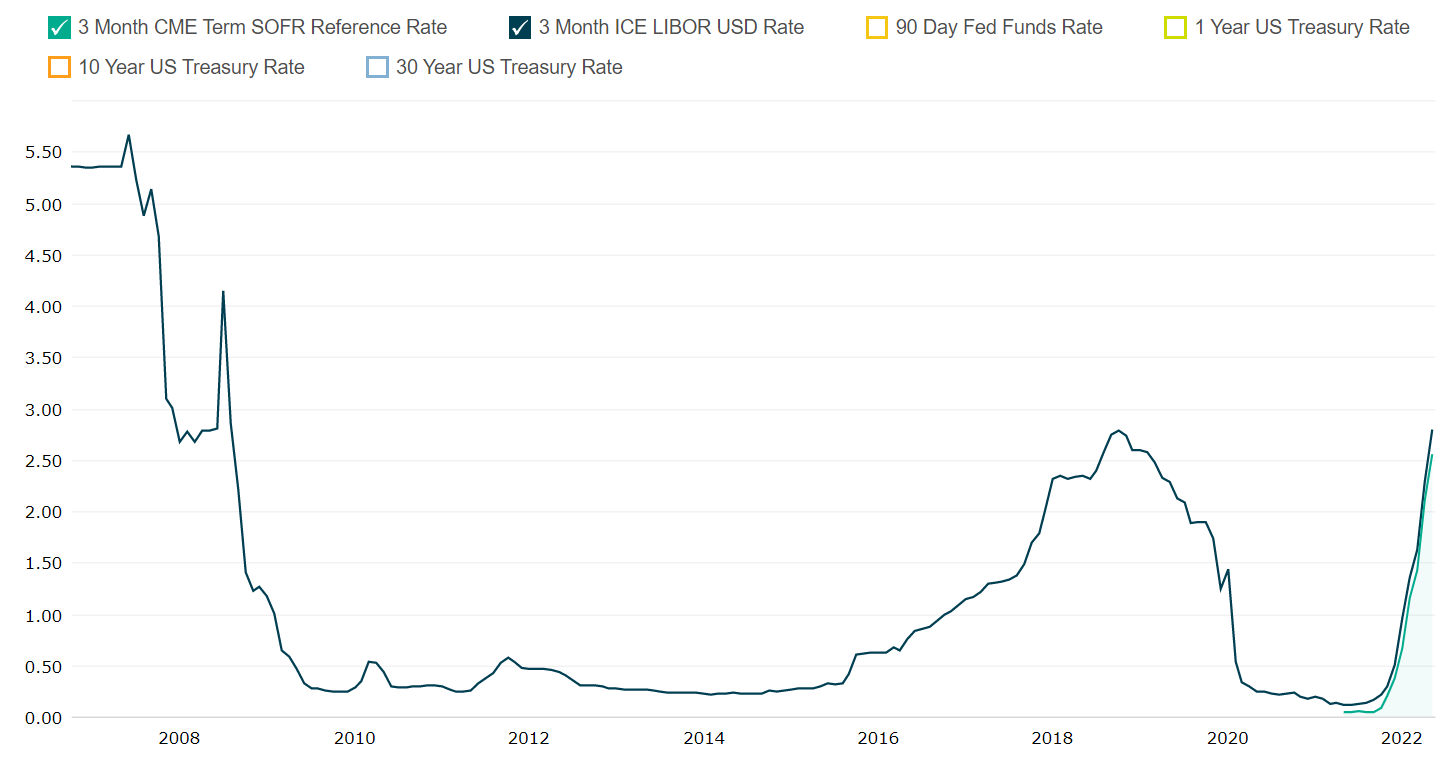 Source: securitybenefit.com (who uses data from the Federal Reserve System)

To carry metal, a bank’s first step is to borrows dollars. Then it buys the metal and sells it forward. So, the basis is closely tied to the interest rate (we are still using LIBOR as an indicative rate).

When the interest rate is moving, we may find it more useful or more revealing to look at a chart which takes interest rates into account. It turns out that we do have such a chart. It is the lease rate*, which is LIBOR – forward rate (forward rate is a different way of looking at the basis). 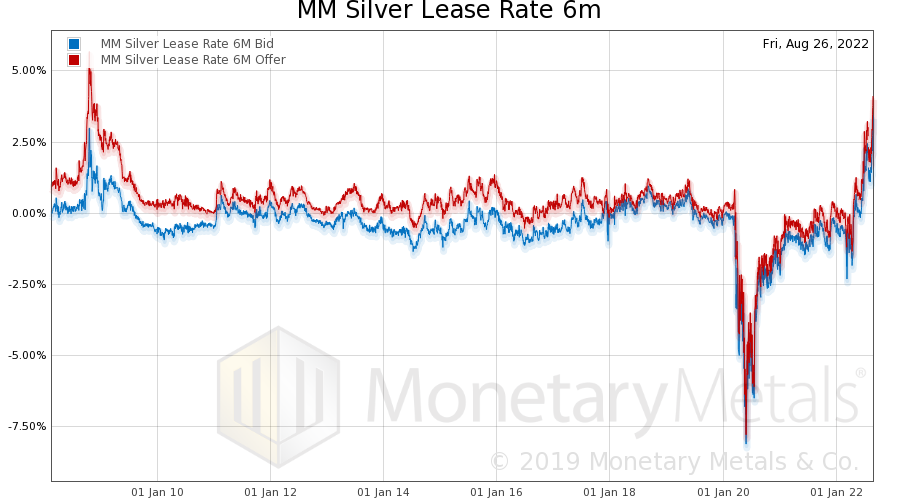 The lease rate, which is another way of looking at scarcity, is higher than at any time since the thick of the global financial crisis, in October 2008.

At that point, silver was trading under $10. And 2 ½ years later, its price quintupled to about $50.

The lease rate, LIBOR – GOFO, is based on arbitrage in the commercial bullion markets, again it has nothing to do with the interest rate Monetary Metals pays silver owners on their silver.

Silver Scarcity and the Future

Will that happen again soon? We don’t know (and neither does anyone else). But we can say with certainty that its scarcity has become serious.

This could be resolved two different ways. One, there could be selling of physical metal combined with a let up in buying. Two, the price could shoot up.

We think this is a good time to place a bet on silver.

Bet or no bet though, you can always earn interest on silver, (and gold) by opening a Monetary Metals account.

We will continue to keep a close eye on silver as the current situation unfolds.