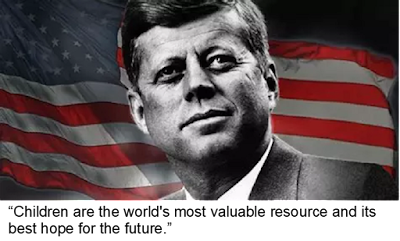 Even the evil communist revolutionary from South Africa Nelson Mandela said “There can be no keener revelation of a society’s soul than the way in which it treats its children.”  That is not just an opinion from one of the most evil men in the world but an absolute truth; there is NO future without our offspring.  Matthew 18:10 (KJV)  “Take heed that ye despise not one of these little ones; for I say unto you, That in heaven their angels do always behold the face of my Father which is in heaven.”  Through His prophets, God as spoken many things of the greatness and preciousness of His little children that are most important for us to know and how He feels about them.

But the evil that is upon this world fights every good thing because it is God that created it and they hate God.  Children are not just some lump in a woman’s body, they are not a part of her alone but a living entity in its own right; rather they are the fruit of a woman’s joint effort, an actual co-Creator with God in giving new life.  Who would do harm to His greatest gift to humanity?  Keep this thought in mind as we explore the devastating assault by the Satanists of this world upon God’s greatest gift to Man.  Leftists please note; Man is used not because it is sexist but because it represents the whole of Humanity.  It includes male and female as in the Human race.  That is the definition used in most of history and is that which is implied in scripture as well; let the modern left and their insane re-definitions be damned.

Before the Roe decision was properly overturned, the American Center for Law and Justice was quoted as saying “”The pro-abortion Left has declared that the Apocalypse is upon us. We’ve long said they worship at the altar of abortion. Now they are displaying a rabid zeal, not only on the streets, but in the media, on social media, and in the halls of Congress” and that is only the smallest part of it all.  They act as if little children yet to be born are not even a life source yet alone a living HUMAN entity when we know that a “healthy human fetus at 34 weeks of gestation can see shapes outside of the womb, according to new research that suggests that such unborn individuals pay special attention to people within view….Taste, touch, smell, balance, and hearing are all active prior to birth,” lead author Vincent Reid of Lancaster University said. “Vision has been the difficult one to assess, until we developed our techniques for our current research….The amount of light that enters the womb is certainly enough that the fetus can see and observe and interact with the world around them,” he added.”  That is not the actions of a simple lump of flesh being removed as if it were just a tumor or the like.  This Rumble video is a short and simple explanation of an abortion, if you can stomach watching it or even just listening to it.   And if the failed abortion allows the child to live, the doctors just leave it to die.

But that evil of the lefts “most vital sacrament” is not their only avenue to murdering and eliminating God’s gift to us as they have many more options that they are pursuing.  The massive infant child murder industry is now pushing a chemical alternative as Abortion News reported at the end of last year that “the Food and Drug Administration has announced it is rolling back restrictions on sending abortion pills through the mail”.  In the National Review reporter Kristan Hawkens said that “They have a deadly back-up plan…. With deft sleight of hand, the abortion lobby has railed against efforts in Texas and fundraised intensely off the Mississippi 15-week limit, all while preparing the big reveal of its new frontier: death by mail. That is, the no-test, online distribution of chemical-abortion pills”.  And how do those pills work?  “RU-486, a two-drug combination of mifepristone and misoprostol that together ends a life. The first drug starves a baby by cutting off progesterone, sometimes called the “pregnancy hormone” that equips the uterus to feed and protect the baby. The second causes horrific contractions, expelling what can be a living infant.”  Worse is that it does not work all that well with up to 8% failure rate to end a pregnancy and “getting rid of health and safety standards for chemical abortion is anti-woman and anti-science. The pills cause four times the complications as surgical abortion, with a risk of death that is ten times higher, according to a National Institute of Health Study” and they noted a much higher risk of the mother bleeding to death and infertility resulting from its use.

So If those pills are so bad, why not a shot to keep women from getting pregnant and if that does not work as well as expected at least it will cause them to auto-abort?  Fear not, they are at least one step ahead of you.  “The confidential Pfizer documents that the FDA have been forced to publish by court order reveal that 82% to 97% of women who were mistakenly exposed to the mRNA Covid-19 injection either suffered a miscarriage or suffered having to witness the death of their newborn child upon giving birth.”  A recent Exposé article also noted that “US Food and Drug Administration (FDA) attempted to delay the release of Pfizer’s COVID-19 vaccine safety data for 75 years” and two different reports suggested that “Pfizer’s confidential data, and the CDC’s manipulated study that show the rate of pregnancy loss following Covid-19 vaccination to be 82%. Just a coincidence?”  Why fight so hard on allowing the murder of pre-born infants when there are easier and more productive methods to do so?