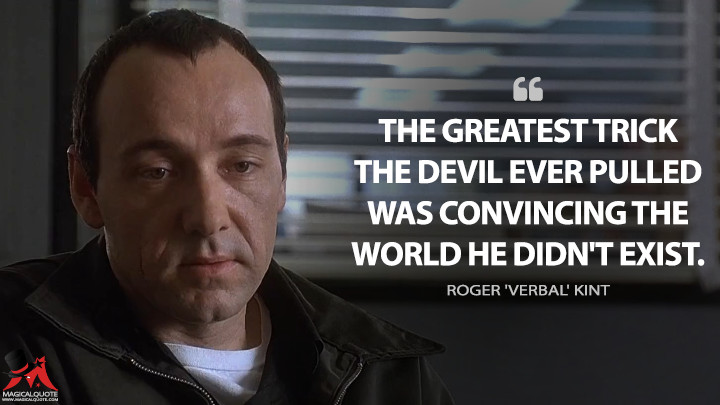 Anger is erupting around the world, and people have much to be angry about. Covid, famine, energy shortages, inflation.

“The greatest trick the devil ever pulled was convincing the world he didn’t exist.” This quote is attributed to the French author, philosopher and poet Charles Baudelaire from an article published in La Figro in 1864. It was a time of upheaval and discontent in France, social unrest, inequality, and a return to an Aristocratic status quo after the failure of the French Revolution.

It was a confused and divisive time. Baudelaire’s article was seen as a metaphor for the evil dark forces that ruled the beleaguered French people at the time. Baudelaire’s Devil didn’t hide, he was open and was there for those with the eyes to see. Nor did he apologise or explain his evil. This Devil, the very personification of all things evil, was protected by the inherent goodness of the majority. The masses who could not comprehend the level of malevolence that dominated and controlled their lives, regardless of how obvious these forces were. The Devil had indeed convinced the people that he didn’t exist. And so the Devil remained in situ. The Franco-Prussian war of 1871, and the two catastrophic world wars were all his work, and yet the people continued to deny his existence. The Devil lives yet today, he is seen to be seen at Davos, the Bilderberg group, The City of London, and on Wall St. The Devil is the International Banking Cartel, this Cabal has initiated and funded both sides of every major conflict for centuries. No country ever wins a war, the cost of any victory is always “Pyrrhic” the loss of blood and treasure can never justify the gains. And yet the bankers always win and profit from conflict, war creates debt, and more debt owed to the bankers means more control. The Devil always gets his due.

As relevant as Baudelaire’s writings may have been in mid-nineteenth century Europe, they are more so today. There is a cognitive dissonance that still exists in the minds of the majority of the Western world. While many are awakening due to Covid and the increasingly obvious Great Reset, there is still a majority who can recognise acts of evil, but not the Devil behind it. This moral relativism is the Faustian bargain Westerners are forced to make about what are acceptable levels of evil.

This phenomena of cognitive dissonance seems to be mainly a Western affliction. The collective postwar West until recently enjoyed high standards of living and comfort relative to the developing world. These lucky generations never suffered the harsh realities of the colonial era in the same way as did the peoples of the “Third World”. The once colonised nations of Asia, Africa and Latin America need little convincing about the existence of evil. It is in their DNA, passed down through the generations of their oppressed forefathers. Westerners had little reason to seriously question the system that ruled them, the colonised conversely, always did.

Similarly with the Germans, those of the West are far less likely to acknowledge the evident evil than those of the former East who witnessed it firsthand after the fall of the Berlin Wall. The bankers’ dictatorship that followed destroyed their societies and stripped the people of their remaining dignities. It is the once prosperous West Germans who are more inclined to trust the system and their government. Those from the once East, know better. Ditto for the Russians who lived through the lost decade of the 90’s when Russia was plundered and humiliated by the predatory forces of Western capitalism. Putin restored the sovereignty and dignity of the Russian people. Putin knew the enemy, which is the reason for the massive support and popularity he enjoys from the Russian people. They understand the enemy he confronts, they have seen the true face of the Devil and they know he exists.

People understand that it is the nature of man to collectivise and pursue common goals. Steel workers, nurses, farmers, et al, all band together to further and protect their collective interests. Also widely accepted is that there is indeed a rich and powerful “elite” that are disproportionally advantaged by their governments, any expectation of fairness is long gone. Yet the suggestion that these same rich and powerful people also get together to promote their interests is regarded as a ridiculous “conspiracy theory”. Westerners have come to accept lies, corruption and incompetence from governments, they have become almost desensitised to it. Yet the existence of a plan, put together by a “Cabal” of the powerful trying to rule the World, is for most in the West, considered a fantasy taken from fiction.

All indications suggest that the cabal now finds itself in a race against time. With economies collapsing across the world, the window to implement their plan is closing as their global influence rapidly wanes. Their system has run its course and they know it, it explains the uncommon haste with which they are trying to push through their demonic Great Reset. Anger is erupting around the world, and people have much to be angry about. Covid, famine, energy shortages, inflation. All are issues that individually are devastating, the compound effect of them all together ushers in a perfect storm, the likes of which the world has never seen. The only thing that will prevent the Great reset is a critical mass of awakened people who refuse to comply. For that to happen it requires that people understand that all the current world problems stated above can be traced to one source. It is the Central Banking Cartel, headquartered in the City of London. It has controlled through proxies the American and global financial system since at least 1913 when it illegally created the Federal Reserve System in America. It has been used as a weapon of war on humanity ever since. This cartel is heavily invested in all the major multi-national industries, especially the defence sector. As it was prior to WW1 when “The Merchants of Deaths”, the weapons manufacturers, were all owned by the same bankers. All wars are bankers’ wars, the Ukraine conflict going on now, is essentially no different.