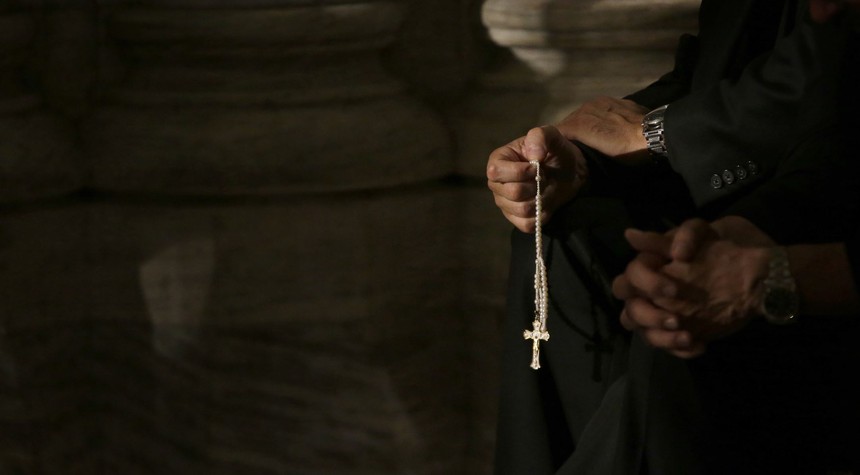 In the Left’s fantasy America, right-wing Trump-supporting Christians, armed to the teeth, are just waiting for their next chance (the first one, in this insane scenario, was on Jan. 6, 2021, kids) to descend upon Washington, overthrow the duly elected and highly respected representatives of “our democracy,” and institute a white supremacist Christian theocracy in which strong, independent women are reduced to baby-making handmaids, LGBTQWERTY types are subjected to psychologically destructive conversion therapy (or just jailed or worse), and “people of color” are forced to hide in the shadows from rogue cops thirsting for their blood. Among those “people of color” are, of course, Muslims (the Left apparently believes that no Muslims are or can be white), whose noble, peaceful religion is constantly sullied by these vicious “Islamophobes.” Given those core beliefs, The Atlantic’s Sunday piece comparing the rosary, a central item in Catholic devotional practice, to assault weapons. To the Left, there’s no difference.

The Atlantic’s Daniel Panneton starts off with a howler, and he’s just getting warmed up: “Just as the AR-15 rifle has become a sacred object for Christian nationalists in general,” he says, linking to a similarly febrile piece about Americans who have the temerity to value the Second Amendment, “the rosary has acquired a militaristic meaning for radical-traditional (or ‘rad trad’) Catholics.” Panneton claims that “on this extremist fringe, rosary beads have been woven into a conspiratorial politics and absolutist gun culture. These armed radical traditionalists have taken up a spiritual notion that the rosary can be a weapon in the fight against evil and turned it into something dangerously literal.”

If you haven’t seen Catholics walking around with a rosary in one hand and a rifle in another, you just haven’t been looking in the right places: “Their social-media pages are saturated with images of rosaries draped over firearms, warriors in prayer, Deus Vult (‘God wills it’) crusader memes, and exhortations for men to rise up and become Church Militants. Influencers on platforms such as Instagram share posts referencing ‘everyday carry’ and ‘gat check’ (gat is slang for ‘firearm’) that include soldiers’ ‘battle beads,’ handguns, and assault rifles. One artist posts illustrations of his favorite Catholic saints, clergy, and influencers toting AR-15-style rifles labeled sanctum rosarium alongside violently homophobic screeds that are celebrated by social-media accounts with thousands of followers.”

There is a glaring absence in Panneton’s story: he doesn’t seem even to have attempted to interview any of these violent, radical, rosary-praying Catholics. It’s obvious why he didn’t do so: their own explanation of what they meant by all this imagery would have differed so widely from the spin that he put on it that it would have immediately brought down the house of cards he was constructing. They would likely have told him about the duty to defend one’s home and family, and about the increasing violence of the Left and authoritarianism of the federal government, couching their possession of firearms in exclusively defensive terms. Panetton, by contrast, would have you believe that they’re ready to descend upon peaceful, unsuspecting gays quietly celebrating Pride Year or whatever this is, and brutally, lustily open fire.

Armed, remorseless Christians ready to impose their will violently on our otherwise beautiful, pluralistic society are central to the Left’s myth. It’s noteworthy that while The Atlantic doesn’t hesitate to publish this garbage, when it published an article in 2015 in which terrorism analyst Graeme Wood said “the Islamic State is Islamic. Very Islamic,” it was inundated with angry criticism from its friends and allies. Wood retreated and began dissembling about the ideological roots of jihad terror, and The Atlantic hastily published another article, this one by a Muslim professor, hitting the “phony Islam” of the Islamic State. Wood’s article had violated a central dogma of the Left, that Islam is a religion of peace that has “nothing whatsoever to do with terrorism,” as Hillary Clinton memorably put it. The Atlantic had strayed off the reservation, and had to get its mind right.