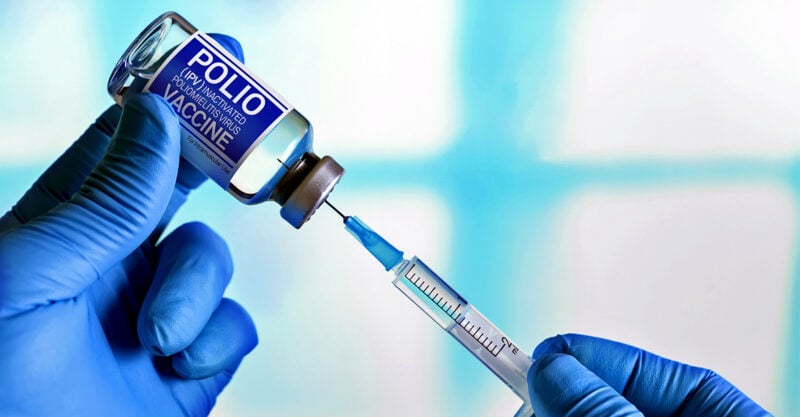 Many people thought that the poliovirus was extinct across the majority of the world, as the World Health Organization (WHO) has declared many continents polio-free.

So this may come as a surprise, but in fact, polio cases have been on the rise globally since 2016, and this resurgent outbreak is related to the use of vaccines.

On July 21, the first polio case in almost one decade was reported by the New York State Department of Health.

And this case was also related to a vaccine-derived poliovirus strain. Poliovirus is non-enveloped. It is an enterovirus composed of a single-stranded RNA and a protein shell.

Roughly 3 in 4 people infected with polio are asymptomatic. Even if there are symptoms, they usually resemble those of the flu.

Yet in 1% of all polio cases, polio causes flaccid paralysis or disability, and it even can lead to death. This is then called paralytic poliomyelitis.

After contracting spinal paralytic poliomyelitis, 25% to 40% of patients will develop varying degrees of sequelae up to 15 to 40 years later, which are also known as “post-polio syndrome.”

This may be because when some patients are young, their immune system is quite strong and able to inhibit the replication of the poliovirus. As they get older, their immunity tends to decline, and the virus within their body may return to wreak havoc.

If the virus affects the neurons or muscles, then it may, in severe cases, lead to temporary or even permanent paralysis or disability, as well as reducing respiratory muscle function and even causing breathing to stop, which then leads to death.

Why is Polio reemerging after being ‘eradicated’?

In the 1950s, polio became a global concern. In 1955, the inactivated polio vaccines (IPV) were developed and in 1962, the oral poliovirus vaccines (OPV) were invented.

In 1988, the WHO, United Nations International Children’s Emergency Fund (UNICEF), and Rotary Foundation launched the “Global Polio Eradication Initiative (GPEI),” with the Bill and Melinda Gates Foundation as the major funding institute.

Primarily through the global distribution of polio vaccines (especially in developing countries) in conjunction with education and prevention campaigns, GPEI hoped to eradicate polio completely.

The WHO has since granted certificates to many countries and regions to prove that they have eradicated polio.

Mainstream media and public health agencies worldwide have unanimously and loudly praised the GEPI and give all the credit for polio eradication to the vaccines and GEPI.

However, realistically speaking, the circulation of poliovirus in the world also has its own patterns, with peaks and declines with or without people’s intervention.

When GEPI started in 1988, there were only several tens of thousands of polio cases globally. Indeed, the extent to which polio vaccines actually worked to control polio outbreaks on a large scale has not been tested in practice.

Furthermore, the WHO’s “polio-free certification” targets only the wild-type strains of the poliovirus. In 2016, the number of polio cases, which dropped to its lowest in decades, saw a sudden increase.

And this time, the poliovirus strains that caused the outbreak were related to the vaccines.

Since the oral poliovirus vaccines were produced with attenuated poliovirus strains, the viruses were not dead in the vaccine. They were just attenuated to lose neurovirulence and had reduced transmissibility.

However, when the OPVs were promoted in many developing countries, the less virulent strains could replicate silently for a long time in people who take the OPV.

On rare occasions, the attenuated poliovirus could revert and replicate efficiently again, or even become virulent again, especially among people who have weak immune systems.

This is because the OPV uses a traditional virology technology to reduce the virulence and productivity of the virus instead of killing it.

When the “weakened” viruses from the OPVs enter the human intestines, it is possible for some to mutate and regain their neurovirulence. These types of viruses are called vaccine-derived polioviruses, or VDPVs.

These vaccine-derived viruses are transmissible among humans. And they can cause the patients to develop symptoms such as paralysis and disability.

The VAPP risk of a newborn is 4.7 cases per million.

According to data from Our World in Data, nearly 80% of 1-year-old infants around the world have received the polio vaccines since 1990.

The most used vaccines were still OPVs at the time. This means that if 100 million children were born, and 80 million received the OPVs, then there could be 376 VAPP cases.