The balance of loans & leases outstanding rose on much higher vehicle prices but much lower sales volume.

In 2020 and 2021, consumers used their stimulus money and extra unemployment benefits and their PPP loans and the cash left over from not having to make rent or mortgage payments, or whatever, to get caught up on their auto loans. And the rate of auto loans that were delinquent 30 days or more dropped from one historic low to the next and finally bottomed out in Q4 2021 at 5.0%.

Since then, this delinquency rate has started to rise from the historic low. In Q2 2022, the delinquency rate rose to 5.6% of total auto loan balances, according to data today from the New York Fed’s Household Debt and Credit Report. It remains below the pre-pandemic low of 6.4%.

The delinquency rate is now normalizing, heading back toward the old normal, which hovered at around 7% during the Good Times: 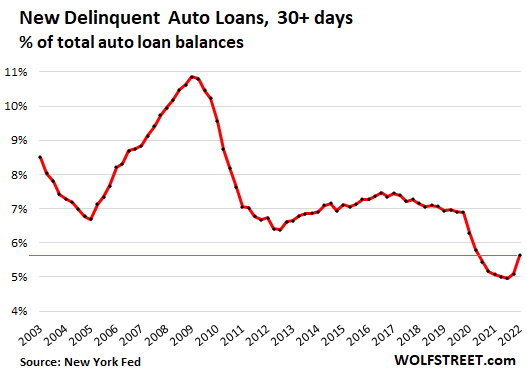 Note how the delinquency rate began rising back in late 2005, in parallel with the Housing Bust, more than two years before the recession, because people under mortgage stress also fell behind on their auto loans. The delinquency rate continued rising as the mortgage crisis triggered the Financial Crisis when Bear Stearns, Lehman, AIG, Fannie Mae, Freddie Mac, and other financial firms collapsed (some got bailed out, others didn’t). Delinquency rates peaked in 2009 at nearly 11%, and then backed off.

The delinquency rates during the Great Recession show what can happen when 10 million people end up unemployed at the peak.

Balances of auto loans and leases rose 6.1% in Q2 year-over-year to $1.50 trillion in Q1, on much higher vehicle prices and much lower sales volume – meaning fewer loans, but with higher balances.

The average transaction price of new vehicles, which accounts for the shifting mix of vehicles, in addition to price increases, spiked by 14% year over year in June, to nearly $46,000, according to J.D. Power data. And these more expensive vehicles needed to get financed, and so the loans got bigger.

So auto loan balances increased by 6.1% in Q2 on this mix of surging prices and falling sales, leading to fewer but bigger loans:

“Car Repos Are Exploding” Not.

A few weeks ago, an article on a major financial news site proclaimed in the headline that “Car Repos Are Exploding.” The article was circulated everywhere, and yet it was devoid of actual data on repos, it had no chart of repos, and was really just clickbait. Most people who spread this thing around the internet never read the article; they just read the clickbait headline, and that was good enough. The internet is a strange place.