Charts of stocks like these – hundreds of them now – are an indictment of the mania in 2020 & 2021. We’ll be shaking our heads for years.

The SPAC Implosion Saga just keeps on giving – this one in the used-car space. San Francisco-based Shift Technologies, a SPAC creature that sells used cars online on its AI-powered platform or whatever, and that lost oodles of money, has entered into a definitive agreement to acquire an even more imploded SPAC creature, CarLotz, an online used-car consignment platform powered by AI or whatever that has lost oodles of money.

In the second quarter through June 30, Shift lost $52.2 million, on $223 million in revenues, selling used cars, which really takes some talent.

Sales rose by 44%, but the cost of sales jumped by 53%. So gross profit plunged, despite the increase in sales. Operating expenses jumped. And the net loss jumped by 65%. Way to go.

It ended the quarter with $88 million in cash and cash equivalent, down by nearly $100 million from six month earlier. So maybe at this rate, two or three quarters left.

In its quarterly filing with the SEC, Shift warned that its “losses and negative cash flows from operations since inception, combined with its current cash and working capital position, raise substantial doubt about the Company’s ability to continue as a going concern.”

Shift shares [SFT] have collapsed by 92% from their high in June 2020 to $1.23. Charts like this – there are now many dozens of them out there from the SPAC and IPO mania – are indictment of the era: 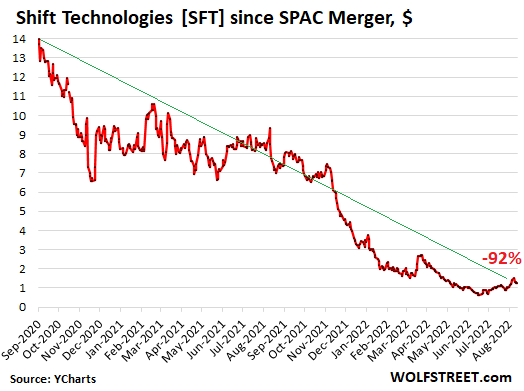 CarLotz, the used-vehicle consignment platform powered by AI or whatever, had a net loss of $34 million in Q2 on $76 million in sales. At the end of June, it had $124 million in cash and marketable securities left to burn.

In May, CEO and chairman Michael Bor was thrown out and replaced by Lev Peker, the former CEO at CarParts.com.

In June, with the new guy in charge, CarLotz announced that it would lay off between 25% and 30% of its workforce and close half of its dealership stores. Another three dealership stores that were scheduled to open will not be opened. All of this to preserve cash and remain in business a while longer.

More layoffs are likely following the “merger of equals” as the company will give up its headquarters in Richmond, VA, and whatever is left over will shack up with Shift in San Francisco. In an employee FAQ, filed with the SEC, the company said:

“I’ll be honest, the most difficult part of a merger is that there will be some duplicative roles that will be reconfigured. And, unfortunately, at this time, I don’t have anything to announce. However, I promise that I will be as transparent as possible and provide updates as soon as I have them.”

And the company pleaded with its employees:

“I know this news may be difficult, but I would ask that we continue to work together to deliver results. We need to continue to operate CarLotz as a stand-alone company until the combination.”

CarLotz shares [LOTZ] have collapsed by 95% from their high and now trade at $0.60. Another chart, like many dozens of others – that serves as an indictment of the SPAC and IPO mania: 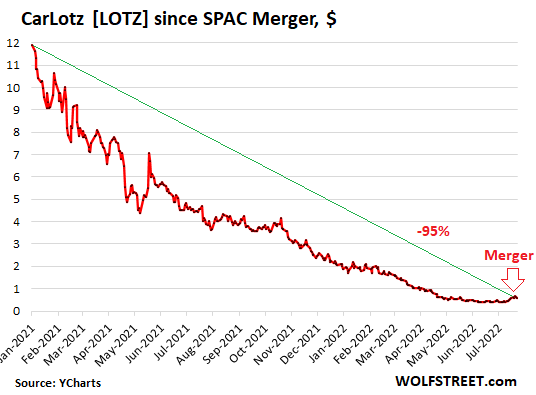 CarLotz shareholders will receive “approximately 0.692158 shares” of Shift common stock for each share of CarLotz common stock. At this morning’s price of Shift shares, this would amount to $0.88. The deal is expected to close in Q4, and hopefully, Shift will make it that far.

After the merger, the brand “CarLotz” will disappear and Carlotz will become a wholly owned subsidiary of Shift.

Shift announced in the same breath that its co-founder and CEO George Arison will step down as CEO effective September 1, to be succeeded by the current President of Shift, Jeff Clementz. Arison will remain Chairman of the Board of Directors, the company said.

Shift, CarLotz, and another online used-vehicle dealer whose shares imploded, Vroom, all went public during the SPAC and IPO mania in 2020 and early 2021, which will go down in history as the most fascinating spectacle of hype-and-hoopla finance driven to ridiculous highs, when everything just flew, no matter what, powered by trillions of dollars of central bank liquidity and pure benighted betting on miracles.