From the Tom Woods Letter:

Every time I turn around, there’s another creepy thing coming out of the World Economic Forum.

Now they’re proposing that governments use artificial intelligence to handle “content moderation” on social media, so that opinions that contradict those of “subject matter experts” (who can still utter that phrase without a snicker?) might be more easily penalized or even removed. 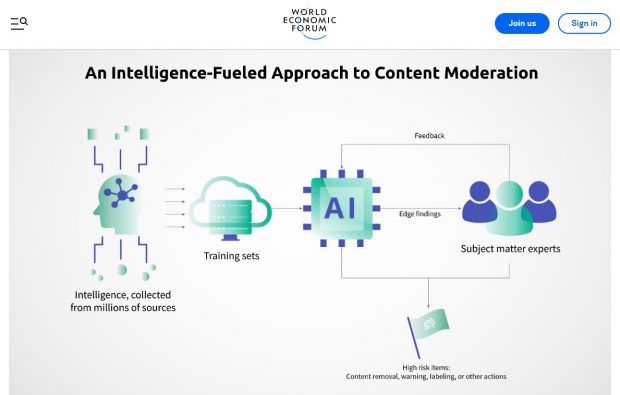 Comedian Dave Chappelle has it right: “The more you say I can’t say something, the more urgent it is for me to say it.”

Not ten years ago we thought you could say just about anything online, and the enforcers of allowable opinion just had to deal with it.

That’s still largely true, but the major platforms — where most people would have heard what you had to say — have been clamping down, as we all know.

I finally had to take the Tom Woods Show Elite off Facebook because I could see the writing on the wall. Post after post kept getting taken down, and eventually Facebook required me to approve each post manually — impossible in a group as energetic and robust as mine.

Screw that, I decided.

So we moved onto a no-censorship platform.

But there’s always a concern: will people really follow me onto a less-trafficked platform? Will the group lose its vibrancy?

Here’s what I didn’t expect:

A whole bunch of people joined specifically because I had left Facebook. “Finally!” they said.

So far I’ve been able to hold off the tentacles of the World Economic Forum and their creepy creeps and lying liars, so I hope you’ll join me in there for no-holds-barred exchanges of ideas, via this link: