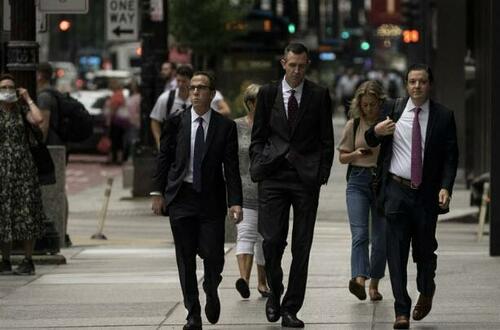 After a three-week trial and more than eight days of deliberations, Michael Nowak and Gregg Smith were found guilty Wednesday by a federal jury, convicted in Chicago on charges they manipulated markets for years.

A third defendant, Jeffrey Ruffo, who was a salesman on the bank’s precious-metals desk, was acquitted of charges he participated in the conspiracy.

“It’s something that’s been on the minds of many people that were involved in the precious-metals markets in that point in time, and I would say this verdict closes a chapter,” said Phil Streible, the chief market strategist at Blue Line Futures.

“This kind of thing had been going on for at least 15 years or more with people waiting for justice, and I never thought it would ever get closed.”

As the trial began we noted that having already paid over $1 billion in fines (in 2020) for ‘spoofing’ markets, JPMorgan is once again making the wrong kind of headlines as more details of the bank’s manipulations come to light in the trial of three senior precious metals traders.

“This was an open strategy on the desk,” said former JPMorgan precious metals trader Christian Trunz, who has pleaded guilty to spoofing charges and is cooperating with prosecutors.

Gregg Smith spoofed almost every day, Michael Nowak did so about once a week, and Jeffrey Ruffo, while not a trader, would sit next to Smith and encourage him to spoof the market to execute client orders at the best possible prices, Trunz said.

As Bloomberg points out, Nowak was once the most powerful person in the gold market. He ran the trading desk for a bank with some of the biggest hedge-fund clients and often dominated order flow in precious-metals futures.

As Bloomberg reports, the case was the biggest yet in a crackdown by the US Justice Department.

Nowak, the managing director in charge of the desk, and Smith, its top trader, were convicted of fraud, spoofing, market manipulation.

The government alleged the precious-metals business at JPMorgan was run as a criminal enterprise, though the jury acquitted all three men of a separate racketeering charge.

“They had the power to move the market, the power to manipulate the worldwide price of gold,” prosecutor Avi Perry said during closing arguments.

US District Court Judge Edmond Chang said Nowak and Smith will be sentenced next year.

Each faces decades in prison, though it may be far less. Two Deutsche Bank AG traders convicted of spoofing in 2020 were each sentenced to a year in prison.