by Riley Waggaman, Off Guardian: 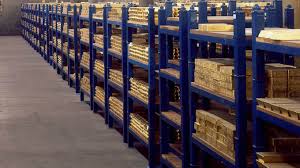 On March 25, the Bank of Russia announced it would buy gold at a fixed price of 5,000 rubles per gram. Less than two weeks later, on April 7, Russia’s central bank canceled its new gold-buying policy, opting instead for a negotiated price (at a discount).

The logic behind this move, according to an excellent report by Interfax, is fairly straightforward: sanctions have made it difficult for commercial banks to export their gold to foreign markets. The Bank of Russia is taking advantage of this conundrum by offering to gobble up their gold—at a reduced price. Yes, it’s a bit stingy, but at least it keeps Russia’s gold miners and merchants in business, and it also ensures Russia’s gold stays inside the country. Everyone wins.

But is the Bank of Russia buying gold?

The short answer is: we have no idea, because this information has been classified since March. Pre-February 24, the Bank of Russia published a monthly spreadsheet disclosing the amount of gold and other assets in its possession. Now we are only told the total value of the central bank’s holdings:

The Bank of Russia stopped reporting its gold holdings (in millions of troy ounces) in March. (source)

In January, the Bank of Russia boasted 74 million troy ounces of gold; in February, 73.9. After that? It’s a mystery.

Okay, but this isn’t necessarily a bad sign. Maybe the Bank of Russia is feverishly and covertly scooping up all the gold it can get its hands on, in order to prepare for the introduction of the “gold-pegged ruble,” which still does not exist?

Maybe, but not according to Tsargrad:

There is no exact information about the Central Bank’s gold operations, since it is classified. We can only build our own guesses based on certain signs. Indirectly, it can be assumed that if purchases are made, they are insignificant.

Unfortunately, it is impossible to say something according to the reports of the Central Bank. Gold is not even singled out in a separate position when the statistics are published. Why doesn’t the Central Bank buy up gold on the domestic market? It seems to me that the main financial regulator is playing against Russia. Of course, this is deliberate sabotage. They’ve been doing it for a long time.

From April 1, 2020 to the end of February 2022, the Central Bank did not purchase gold, and this was reflected in the statistics of the Central Bank. Now everything is closed, but by indirect signs, we feel that there are no purchases or they are minimal. One of the confirmations for me is my contacts with representatives of gold mining companies—they say that they do not receive any orders from the Central Bank. From commercial banks—yes, in theory they can resell gold to the Central Bank, but before such transactions were made directly.

We have to admit this testimonial contradicts our previous assumptions about how the Bank of Russia acquires gold. Our understanding was the central bank deals exclusively with commercial banks. But according to Katasonov, this is not necessarily the case—in the past, gold miners have bypassed the middle man and have worked directly with the Bank of Russia. You learn something new every day.

Kommersant, citing its own experts, also believes the Bank of Russia’s recent gold purchases have been negligible.

As Katasonov concedes, it’s possible commercial banks are selling gold to the central bank. At the very least, we can confirm ordinary Russians are buying precious metals—motivated in part by the government’s decision to drop VAT on such purchases.

According to a recent report by Kommersant, commercial banks have recorded a sharp increase in gold bar sales to private investors. Over the past five months, Sberbank customers purchased 10.9 tons of gold bars. But domestic demand is still low when compared to gold exports in the beginning of 2022.