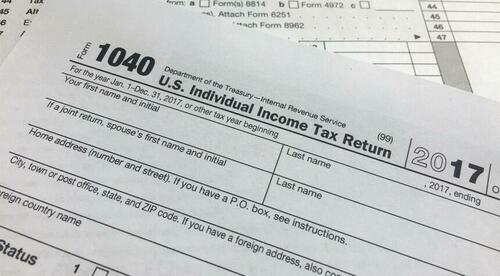 Authored by Jazz Shaw via HotAir (emphasis ours),

Tucked away in the hilariously-named “Inflation Reduction Act” that Joe Manchin has been working on with Chuck Schumer is one significant bit of spending that has been mostly flying under the radar. The measure would fund a massive expansion of the Internal Revenue Service to the tune of eighty billion dollars. And we’re not using the word “massive” in a hyperbolic fashion here. This money would go toward hiring an additional 87,000 employees for the detested agency, more than doubling the size of its workforce.

As the Free Beacon points out this week, that would make the IRS larger (in terms of manpower) than the Pentagon, the State Department, the FBI and the Border Patrol combined. And what do they plan to do with that many people? Do you really need us to tell you?

If Democrats have their way, one of the most detested federal agencies—the Internal Revenue Service—will employ more bureaucrats than the Pentagon, State Department, FBI, and Border Patrol combined.

Under the Inflation Reduction Act negotiated by Sen. Joe Manchin (D., W.Va.), the agency would receive $80 billion in funding to hire as many as 87,000 additional employees. The increase would more than double the size of the IRS workforce, which currently has 78,661 full-time staffers, according to federal data.

The additional IRS funding is integral to the Democrats’ reconciliation package. A Congressional Budget Office analysis found the hiring of new IRS agents would result in more than $200 billion in additional revenue for the federal government over the next decade. More than half of that funding is specifically earmarked for “enforcement,” meaning tax audits and other responsibilities such as “digital asset monitoring.”

So this expansion would turn the IRS into an even larger beast than it already is. And we know that it’s also one of the most heavily armed agencies in the federal government. So what do they need all of those people for, not to mention all of the guns and ammo?

Democrats always talk about the need to go after “the top one percent” and make them “pay their fair share.” It’s true that we have quite a few wealthy people in this country, but we don’t have so many that you need more than 150,000 agents to keep an eye on them. No, according to one recent study cited in the linked report, this move is being sought to generate more revenue for the federal government. And the vast majority of that new revenue will come from families earning less than $200K per year. In other words, the middle to upper-middle class. Trust us, the IRS already goes over Elon Musk’s taxes with one hundred fine-toothed combs.