In a recent interview with Roman Balmakov from “Facts Matter,”1 a podcast by The Epoch Times, I discuss how American medicine was reshaped and holistic medicine sidelined by the Rockefeller and Carnegie Foundations, starting in 1910. Before that time, natural medicine — using herbs, homeopathic remedies and general nutrition from food were very popular. 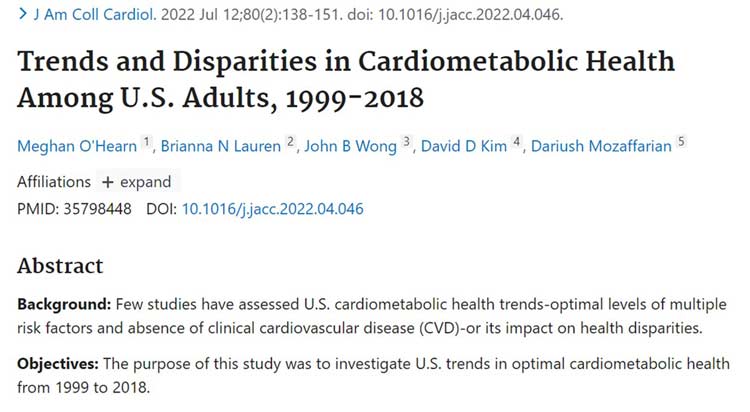 I believe it’s fairly easy to see that the transition from holistic medicine, which treats the cause, to synthetic drugs that only treat symptoms, has been a driving factor behind the rise in metabolic diseases. But before I get into the history I want to share an incredible study published last month that shows 14 out 15 people in the United States are metabolically unfit. This shocking analysis was published in the Journal of the American College of Cardiology.

I am currently writing a new book, and the first chapter details how Rockefeller captured the U.S. medical system through a clever campaign that had his foundation strategically invest $150 million from 1920 to 1930 in medical schools and hospitals. While this may not sound like much today, adjusting for inflation that is between $4 and 5 billion dollars today.

This investment secured his ability to control the entire medical school curriculum. After 1910 all natural medical therapies were eliminated and replaced with teaching about drugs. Many may not realize that most drugs are derived from petrochemicals2 and oil was what Rockefeller was known for.

Understanding how medicine was corrupted in the first place can help us understand current-day events as well. In many ways, it’s a repeat of the basic process — identify a problem or shortcoming (whether true or fabricated), pronounce a solution, then tear down the old system and replace it with a new one.

The Intentional Suppression of Health

Statistics reveal 14 out of 15 American adults are metabolically unhealthy, which is a staggering realization. As I explain in the interview, I’ve spent the last 25 years educating people about the foundations of good health, and warning against that which undermine it, which includes environmental, dietary and pharmaceutical toxins.

While I’ve been disparaged as a “top misinformation spreader” about COVID, the attacks against me started long before the pandemic, so this is nothing new for me. The fact of the matter is that holistic health and nutrition have been the top threats to allopathic medicine ever since its inception, 112 years ago.

They’ve been suppressing knowledge about nutrition and natural health ever since they successfully banished these concepts from the medical schools. What’s new is that we now have technologies that greatly facilitate the suppression and censorship of information on the one hand, and allow Big Pharma to blanket the information space with its propaganda on the other.

The end result is an echo chamber with no diversity of opinion. This is dangerous in any circumstance, but in particular when it comes to health. These technological advancements have also facilitated what professor Matthias Desmet refers to as “mass formation hypnosis,” a psychological condition required for totalitarianism to truly take hold.

Google is a major player in this social engineering project; 93% of online searches in the entire world are done using Google. But this doesn’t include the dozens of other search engines that use Google’s application programming interface (API) to access the results, which means that number is likely north of 95 to 96%. Indeed, a 2022 report showed that 94% of all mobile and tablet searches are using Google.3

That number is beyond shocking. Virtually anyone using the internet is relying on Google’s search engine. Please understand that all the information on censored sites still exist but if you don’t have an index or key to locate it, it is the same as if it never existed. Google has very cleverly silently implemented the 21st century version of the burning of the Library of Alexandria.

Until 2016, it was relatively easy to find information online. Very little was censored. But, over time, and especially over the past six years or so, Google started tweaking algorithms to suppress certain kinds of information that are in competition with Big Pharma, Big Food and other globalist interests.

Today, that information restriction has reached a zenith. It can be very difficult to get to certain kinds of information, and sometimes you have to bypass labels warning you that you’re about to read something that has been “debunked” and could harm you if followed, and redirectional messages telling you where to go and what to read instead.

How the Medical System Was Hijacked

As mentioned, Standard Oil mogul John D. Rockefeller was instrumental in corrupting the medical system, turning it from a focus on health to a focus on treating symptoms with petrochemical-derived pharmaceuticals, thereby ensuring that people remain sick — sometimes for life.

John’s father was William Avery Rockefeller, an authentic “snake oil salesman” who impersonated physicians and conned people into buying his useless “Rock Oil” tonic for cancer — a mixture of laxative and petroleum. Avery once admitted he would cheat his children every chance he got, in order to “make ‘em sharp.”4 Evidently, John D. learned the lessons of duplicity and fraud well.

In 1901 — after dismantling the public transportation system in the U.S. and taking over the public education system — Rockefeller set his sights on the medical industry. He founded the Rockefeller Institute for Medical Research, and appointed Dr. Simon Flexner, a professor of experimental pathology at the University of Pennsylvania, to head it up.

Flexner’s brother, Abraham, was commissioned by Rockefeller and Henry Pritchett, then-president of the Carnegie Foundation,5 to write a report on the state of the American medical education system. One of the goals of this study, which became known as The Flexner Report,6 was to improve the credibility of the medical profession.

The now infamous term “trust the science” that Fauci and others famously promoted has its roots in this report, which was published in 1910, as it sought to impress the importance of scientific medicine. It’s really impossible to overstate the impact the Flexner report had on medicine, as it led to a complete and radical overhaul.

Virtually every natural medical therapy was criminalized and about half of all medical schools were forced to shut down. Natural medicine practitioners were put out of business and replaced with doctors who practiced scientific medicine. Natural remedies and ancient effective cures were dismissed as quackery.

The only medicines deemed reputable were patentable synthetic drugs, invented in the oil cartel’s own research centers. The new system also put into place barriers for Blacks and women, making it very difficult for them to get into medical school. Similar changes took place in hospitals.

Through the Rockefeller Institute for Medical Research, the Flexner report, extravagant donations to strategic partners and investments in the pharmaceutical industry, Rockefeller gained unprecedented control over the entire medical system, from education and science to hospitals and the drug companies themselves.

John D. died in 1937 (actually about a mile from where I currently live), but his legacy lives on. To this day, the Rockefeller family owns about 50% of all drug companies, and The Rockefeller Foundation has played a central role in the global cabal’s effort to impose worldwide totalitarianism.

The Rockefeller Foundation is now leading the charge toward a new food system centered around synthetic and lab grown foods, which will have the same effects on health as the late John D. Rockefeller’s ‘new and improved’ allopathic medical system.

For example, the Rockefeller Foundation was part of Event 201,7 in which the authoritarian response to COVID was laid out, and in July 2020, it published “Reset the Table: Meeting the Moment to Transform the U.S. Food System,”8 which calls for a restructuring of the entire food system to make it more “fair and equitable.”

So, the Rockefeller Foundation is now leading the charge toward a new food system centered around synthetic and lab-grown foods, which will have the same effects on health as the late John D.’s “new and improved” allopathic medical system.

They’ve Declared Their Plan for a Food Crisis

As I mention in the interview, the globalist cabal, which includes The Rockefeller Foundation, the World Economic Forum (WEF), the World Health Organization (WHO), the Bill & Melinda Gates Foundation and many other entities and individuals, are not necessarily shy about telling us their plans.

It’s detailed in publicly available reports, in interviews, mainstream media articles and during the annual meeting in Davos. So, if you’re observant, and believe what they’re actually saying, you can know what’s coming. Right now, we’re repeatedly told that the food system is not working, climate change is destroying food production and that to survive, we need to get used to eating insects and drinking reclaimed sewage.

Gates is calling on the Western world to abandon real meat and transition to lab-grown meat which he, of course, is invested in. The Netherlands and Canada are now imposing nitrogen restrictions that will result in farmers being put out of business, and food distribution centers are mysteriously burning down around the world.

All the signs for a manufactured food crisis are here. I was a Boy Scout as a youth, and their motto, “Be Prepared,” has served me well. And, certainly, if there ever was a time to get prepared, it’s now.

They’re dismantling the food system in order to replace it with patented foods, in the same way Rockefeller replaced natural herbs and nutrition with patentable synthetic chemicals a century ago. So, if you can, you’d be wise to stock up on food to last three to six months, or more.

On top of the intentional destruction of our food supply to justify the “build back better” agenda, which is basically code for the implementation of worldwide tyranny, we’re also facing a worldwide agenda that appears intent on taking as many lives as possible in coming years.

And that includes children. In late June 2022, the United States became the first country in the world to grant emergency use authorization (EUA) for Pfizer’s and Moderna’s COVID jabs for toddlers as young as 6 months. The Food and Drug Administration issued the EUA June 17,9 and the very next day, the Centers for Disease Control and Prevention recommended all toddlers get the shot as soon as possible.10