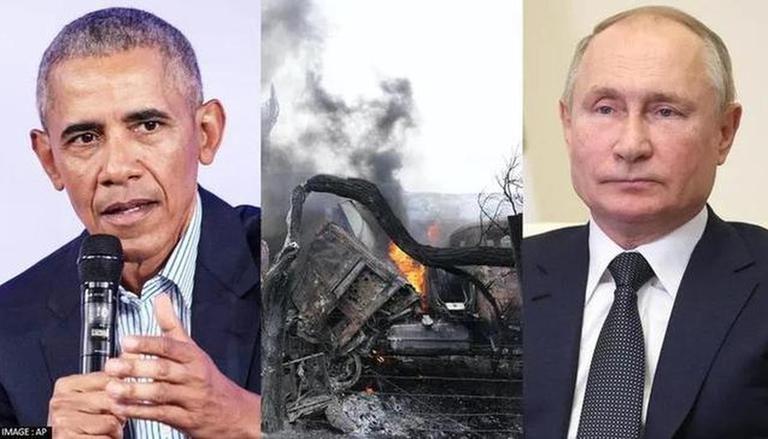 Obama’s start of the war in Ukraine is well evidenced in the following two brief videos:

His actual beginning of that start to the war occurred soon after 8 February 2010, at which time Britain’s Guardian headlined “Yanukovych set to become president as observers say Ukraine election was fair”.

On 2 April 2010, Gallup (the standard U.S. Government contractor to poll Ukrainians) headlined “Ukrainians Likely Support Move Away From NATO: Residents more likely to view NATO as a threat than protection,” and reported that 40% saw NATO as “Threat,” while 17% saw it as “Protection.” Ukrainians definitely viewed America as being a hostile power. They were overwhelmingly pro-Russia.

On 12 April 2010, the democratically elected President Yanukovych met America’s President at the White House, to which Obama had invited him, but Yanukovych refused Obama’s suggestions that Ukraine join America’s alliance against Ukraine’s next-door neighbor Russia. On 2 July 2010, U.S. Secretary of State Hillary Clinton and Yanukovych held a joint press conference in Kiev, where she said

“We discussed ways that Ukraine and the United States can deepen and expand our strategic partnership, moving forward with the work of the U.S.-Ukraine Strategic Partnership Commission that I co-chair. … And the United States welcomes Ukrainian parliament’s decision to approve foreign military exercises on Ukrainian territory in 2010 and we thank Ukraine and the Ukrainian people for your important contributions to NATO and other international security operations. … And as I said, we are grateful for Ukraine’s contributions to NATO security efforts and other peacekeeping operations around the world. And we look forward to the joint U.S.-Ukraine military exercises. And we also support a relationship with Russia that is in Ukraine’s interest that helps to further what President Obama has called the resetting of relations with Russia.”

But, finally, Yanukovych turned down the U.S.-EU proposed alliance with Ukraine against Russia, the proposal that Ukraine join the EU and abandon its trade with Russia (both of which are essential prerequisites to joining NATO and receiving U.S. missiles to post on Russia’s border). Though the reason for Yanukovych’s having turned it down was stated in U.S.-allied ‘news’-media as being that he was allied with (his next-door-neighbor) Russia against America (just a lie), the actual reason was that America and its EU had set the deal up for Ukraine to bleed $160 billion which it simply didn’t have. The whole deal was no real deal, but only a set-up to stir “Maidan demonstrations” against Yanukovych, which would serve as a cover for a CIA coup that would install a rabidly anti-Russian Government in Ukraine.

The Obama Administration’s planning for the coup to regime-change Ukraine had started in 2011 (barely after Yanukovych had turned down Clinton-Obama’s urgings to join “The West” against Russia). It was planned on the basis that Yanukovych would turn the EU’s offer to Ukraine down. Yanukovych did that on 20 November 2013. The CIA-edited and written Wikipedia claims that the ‘Ukrainian revolution’ (actually coup) started the day after he did that. It was started by the “demonstrations on the Maidan Square” in Kiev, and they “began on the night of 21 November 2013 with public protests in Maidan Nezalezhnosti (Independence Square) in Kiev.” That started it; the U.S. regime’s plan to take over Ukraine didn’t. According to Wikipedia, and the U.S. Government — deep liars.

On 5 December 2013, a pro-Russian news-site, Voltairenet, headlined “Jihadists in charge of crowd control in Kiev protests”, and it was true — that was part of the U.S. Government’s plan. Then, eight days later, on December 13th, the neoconservative U.S. website The Daily Beast’s reporter on the scene in Kiev, bannered “The Fight for the Maidan: How long can Ukraine’s protesters hold out against Yanukovych’s thugs?” That counterforce from Ukraine’s democratically elected Government was also part of the plan (to make that Government look bad). The “thugs” word was referring there to the police of the democracy, and not to the CIA’s hired goons, both Ukrainian nazis and foreign mercenaries (who weren’t even mentioned by the Daily Beast’s billionaire owner Barry Diller’s hired ‘journalist’). (And the U.S.-hired goons were barbaric, in the extreme, many of them proud to display their nazism, which was focused against ethnic Russians — a large percentage of Ukraine’s population.)

Two parts of Ukraine that had voted especially heavily for Yanukovych, broke away from Ukraine: Crimea, and Donbass. Then, the civil war started:

16 April 2014, “A day of humiliation, as Ukrainian military offensive stalls, six armored vehicles seized”, as described by the pro-overthrow-of-Yanukovych Kyiv Post. The Donbass cities of Kramatorsk and Sloviansk were rebelling against the Obama-imposed new coup government.

5 May 2014, “Ukraine crisis: ‘Those fascists killed this girl and they will be in hell’”,  Britain’s pro-overthrow Telegraph reports from Kramatorsk “the people engulfed in a climate of fear” of the invading Ukrainian forces:

“For good or ill, more than 80 per cent of them voted for Viktor Yanukovych, the fallen president, in the last election in 2010. After all, he was born in the region and had previously served as governor of Donetsk. Moreover, a large minority of the people in this area – almost 40 per cent – identify themselves as ethnic Russians.

When Mr Yanukovych was overthrown in the revolution in February, supporters in his home area did not see this as the richly deserved downfall of a corrupt, authoritarian leader. Some had indeed come to loathe him, particularly for the shameless theft that was the most striking feature of his rule, but even they tended to believe that the moment to get rid of him would arrive at the election in 2015.