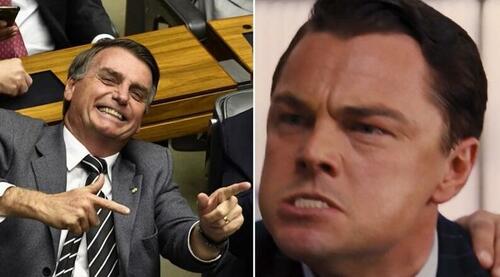 Brazilian President Jair Bonsonaro gave Leonardo DiCaprio a lecture in hypocrisy, telling the virtue-signaling actor that he should ‘give up his yacht before lecturing the world‘ about the environment.

Of note, in January DiCaprio was pictured vacationing with friends on the $150 miullion “Vava II,” the largest yacht manufactured in Britain, which is estimated to produce 238kg of carbon dioxide per mile – as much as the average British car emits in two months.

@LeoDiCaprio climate around your fakeness is changing rapidly..
😂😂 https://t.co/DZHKpXy86m

Bolsonaro was responding to DiCaprio, who tweeted that the Amazon rainforest has “faced an onslaught of illegal deforestation at the hands of extractive industry over the last 3 years.”

“You again, Leo?” Tweeted Bolsonaro. “I could tell you, again, to give up your yacht before lecturing the world, but I know progressives: you want to change the entire world but never yourselves, so I will let you off the hook.”

“Between us, it’s weird to see a dude who pretends to love the Planet paying more attention to Brazil than to the fires harming Europe and his own country,” he continued.

– You again, Leo? This way, you will become my best electoral cable, as we say in Brazil! I could tell you, again, to give up your yacht before lecturing the world, but I know progressives: you want to change the entire world but never yourselves, so I will let you off the hook. https://t.co/FxCnqhFv6D

The trouncing continues (emphasis ours):

But don’t worry, Leo, unlike the places you are pretending not to see by brilliantly playing the role of a blind man, Brazil is and will carry on being the nation that most preserves. You can carry on playing with your Hollywood star toys as we do our job.

Actually, in my government average deforestation is way lower than it was in the past, when the crook turned candidate that your Brazilian buddy supports was in power.