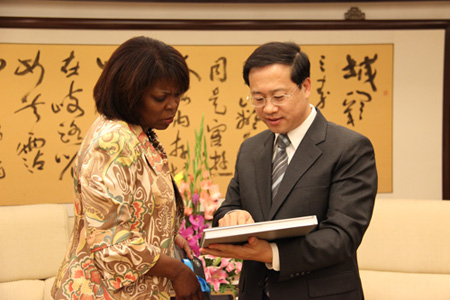 ACo-Chair of President Joe Biden’s forthcoming White House Conference on Hunger, Nutrition, and Health has appeared in documentaries produced by Chinese Communist Party-run outlets; lauding the regime’s agriculture and food policy as an approach that should be “learned by the whole world.”

Ertharin Cousin, one of five individuals selected by President Biden to lead the conference, has also repeatedly praised the Chinese Communist Party’s agricultural policies, with her quotes frequently appearing on regime-run media.

Set to take place in September, the White House’s conference is slated to address nutrition and health in addition to food security and agriculture. It comes as inflation and food shortages plague the economy, dovetailing with efforts by left-wing activists and billionaires to eliminate meat from Western diets to supposedly combat climate change.

Cousin is the sole interviewee in the 20-minute program aired by CGTN, which is entirely owned and operated by the Chinese Communist Party. It has been described by the Freedom House think tank as “a long-standing weapon in Beijing’s arsenal of repression” whose “mission is to attack designated enemies of the Communist Party.”

The episode peddles Chinese Communist Party talking points surrounding the success of its agriculture methods despite the regime’s notoriety for famine and food rationing during the Cultural Revolution.

“In China, agricultural reforms ensured most rural farmers had land to grow on, allowing them to be food self-sufficient. China’s poverty reduction efforts have contributed to 70 percent of the world-wide poverty reduction since the 1980’s,” asserts the host, who makes no mention of China’s history of famine.

“Yes they do,” responds Cousin, adding “You would often hear me use China as an example of a country that the world said would never feed itself. That it would always depend upon assistance from the global community because 50 years ago, China was WFP’s largest recipient, and that all evolved to the point where President Xi now says that he will eradicate poverty by the end of 2020.”