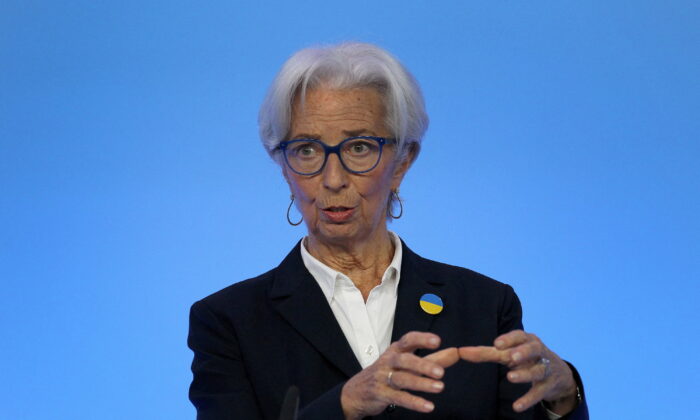 The Chief of the European Central Bank (ECB) has said that climate change is behind soaring inflation, stating that droughts and famines are driving up prices.

ECB Chief Christine Lagarde made the comments in an interview with the French outlet Madame Figaro, on July 13. An English translation of the interview was published on Aug. 25.

“If more and more climate disasters, droughts, and famines occur throughout the world, there will be repercussions on prices, on insurance premiums, and on the financial sector,” Lagard said. “We need to take that into account.”

Lagarde’s comments come as inflation has soared across Europe as households have to fork out more for food and energy. Meanwhile, price increases continue to outpace the average rate of wage increases.

The European Union continues to push for a climate change agenda while simultaneously trying to reduce its dependence on Russian gas in the wake of its invasion of Ukraine, despite there being increased energy demand amid a soaring hot summer and limited supplies.

As a result, gas prices have drastically risen in the EU in recent months and show no sign of slowing down. More pain is set to come when the vital Nord Stream 1 gas pipeline that connects western Russia and Germany shuts down for three days of “routine maintenance” at the end of this month.

Elsewhere on Thursday, Lagarde was asked if she feels “any weight of the responsibility” that her decisions have had on the lives of Europeans.

“Yes, absolutely. I still buy my groceries at the supermarket, pay my own bills, including my gas bills, and meet people at the market, as life here at the ECB can be a little removed, disconnected, and punctuated with econometric models and projections. I move forwards with a sense of duty and humility,” she responded.