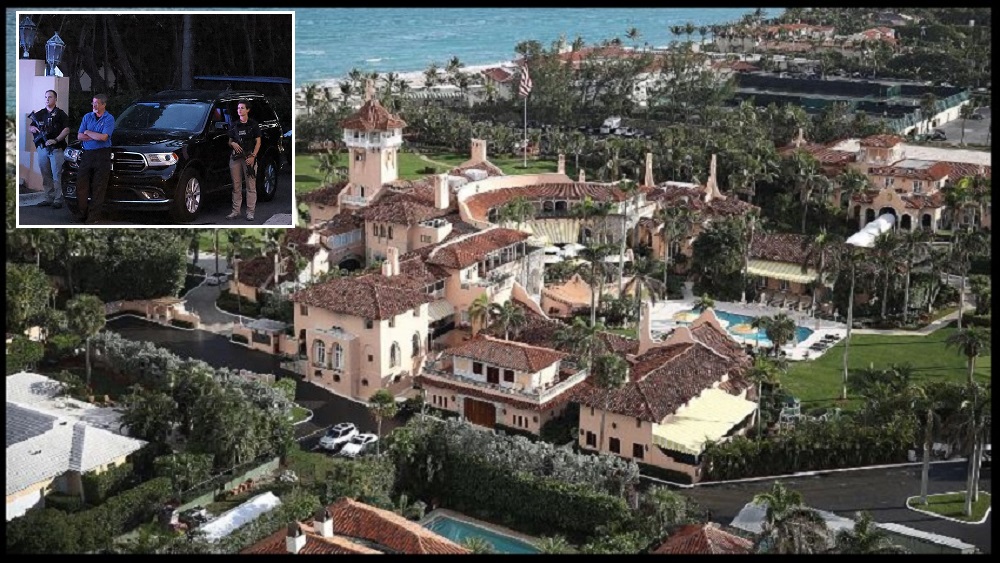 More details surfacing about the illicit, sketchy and highly political FBI raid on President Trump’s home are coming out.  The federal agents sent by the DC political system refused to provide the search warrant and demanded all of the security cameras covering the compound be turned off as they conducted their raid.

Thankfully, and due to the suspicious nature of the FBI operatives involved, the Trump security team did not turn off the cameras.  The Dept of Justice and FBI have yet to give a public statement supporting the predicate of their raid, as a result the transparent political motives have awakened an entire world to the reality of a corrupt USA deep state.

Based on prior statements outlined by Trump’s legal team, I suspect a different DOJ/FBI motive than is currently being discussed.  First, the information from Eric Trump.

(Via Daily Mail) – Eric Trump revealed FBI agents refused to hand over the search warrant for their raid on Mar-a-Lago and kicked an attorney off the property in a new, incisive account of the Monday operation at the Florida estate.

Speaking exclusively to DailyMail.com, the former president’s son said the 30 agents who arrived at the property asked staff to turn security cameras off – but they refused.

He also said that the attorney was forced to stand at the end of the Mar-a-Lago driveway while the team searched inside – and allegedly used safe crackers to break into his father’s safe.

He called the raid another ‘coordinated attack’ on his father Donald Trump and insisted there is no way President Joe Biden was kept in the dark about the search.

The latest explosive account comes with the Department of Justice facing mounting pressure to explain what grounds they had for the search.

Eric said that his father’s lawyer Christina Bobb was forced to stand at the end of the Mar-a-Lago driveway throughout the raid.

‘There’s 30 agents there,’ he recalled of the Monday search in a phone call with DailyMail.com. ‘They told our lawyer… you have to leave the property right now. Turn off all security cameras.’

He said that Bobb was confused why a lawyer for the person’s home being raided by the FBI was not able to see or obtain a copy of the search warrant.

Eric said he would be ‘thrilled’ to find out if there was a valid search warrant.

The FBI declined to comment to DailyMail.com on the raid and Eric’s claim no search warrant was handed over to Trump’s legal team.

‘It’s all a coordinated attack with the FBI,’ the former president’s son added, insisting the raid was approved by President Biden.

‘Do you think that the FBI director is going to raid the former president’s house, especially a house as you know, kind of world renowned as Mar Lago is in a place as public as Mar Lago is without getting the approval of President [Biden]?’ Eric questioned.

By not turning off the security cameras, Eric said they saw the FBI raiding areas of the property that they ‘shouldn’t have been.’

Donald Trump lamented Wednesday that the FBI blocked his lawyers from the property during the raid at his Palm Beach, Florida residence and suggested that agents may have ‘planted’ evidence. (read more) 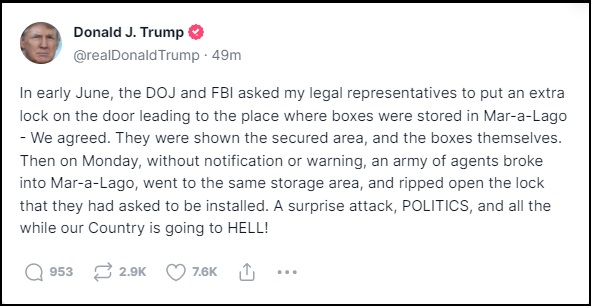 In earlier interviews with President Trump’s lawyers, it was noted that officials from the national archives (Washington DC) and team trump had already spent hours looking through the documents at the heart of the matter at the Mar-a-Lago estate. So, Washington DC officials already knew exactly what was in those boxes.

Knowing the details of the DOJ and FBI targeting operations against Donald Trump as a candidate and president (2015-2020), I suspect Trump took some of the declassified (by him) evidence of that targeting with him.

We remind ourselves that since leaving office, former Office of the Director of National Intelligence, John Ratcliffe, has stated on multiple occasions that there were documents he and Trump declassified for the Durham team and to be made public.

As Ratcliffe has noted, those declassified documents were never released.  The DOJ/FBI have instead been hiding behind the Durham investigation as the justification for not releasing them, ie, ‘an ongoing investigation’, etc.

I am willing to bet the current documents at the heart of the controversy are copies of those same previously declassified documents that are against the interests of the current ODNI, DOJ and FBI to release.

The national archives are a false front, a general institutional tool for use in creating the optic/narrative of a valid reason for challenging President Trump over documents.  The real motive of the DNI, DOJ and FBI are to get the evidence of the prior corrupt activity back in their total control.  I am confident this is the real scenario that people are not discussing.

The DOJ and FBI are not only hiding the documents that former DNI Ratcliffe declassified and left for release, but they are also on a seek and capture mission for copies of those documents because they will never release them.   This is also the Deep State motive to drag out the Durham investigation.

If the Durham investigation ended, and if the ODNI did not release the documents, then Trump would have justification for releasing those documents.  The need for control is always a reaction to fear.  What the DOJ and FBI fear is the content of those declassified documents.